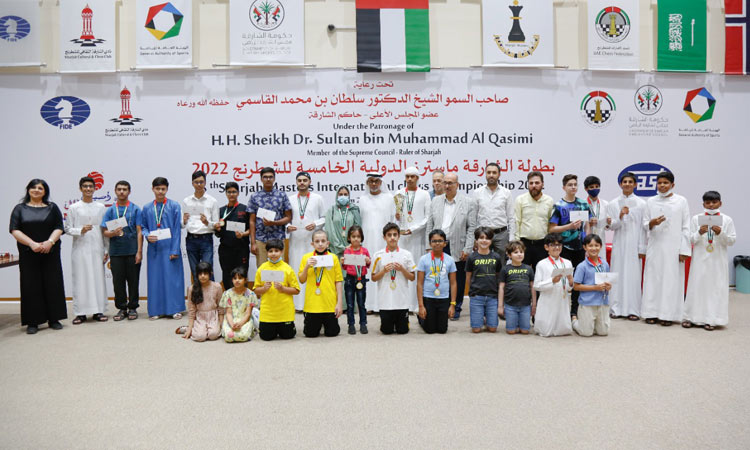 Winners pose for a picture with Imran Abdullah Al Nuaimi and Rajai Noman Al Sussi during the presentation ceremony.

The Sharjah Cultural & Chess Club organised the July Rapid Chess Championship as part of its summer activities. The championship was held under the supervision of the Sharjah Sports Council.

150 male and female players from 15 countries participated in the tournament. The tournament was held over two days and played by nine rounds, according to the Swiss system, with a time control of 10 minutes for each player, with an addition of 5 seconds for each move, per player.

The organisation of the tournament is part of the plan and strategy of the club's technical staff to develop emerging players and discover new talents.

Following the close contest on the table for the two days, FIDE Master and Fujairah Chess & Culture Club’s star Ammar Al Sedrani won the championship after securing 8.5 points with eight wins and a single draw.

The organising committee of the tournament had allocated special prizes for the players of the Sharjah Chess Clubs participating in the tournament, where Maliha Club’s Abdullah Rashid and Tawfiq Ayoub received the best players award, Ittihad Kalba Club’s Muhammad Al Hawamdeh and Ahmed Khalifa Al Badwawi of Al Hamriya Club also got the same award.