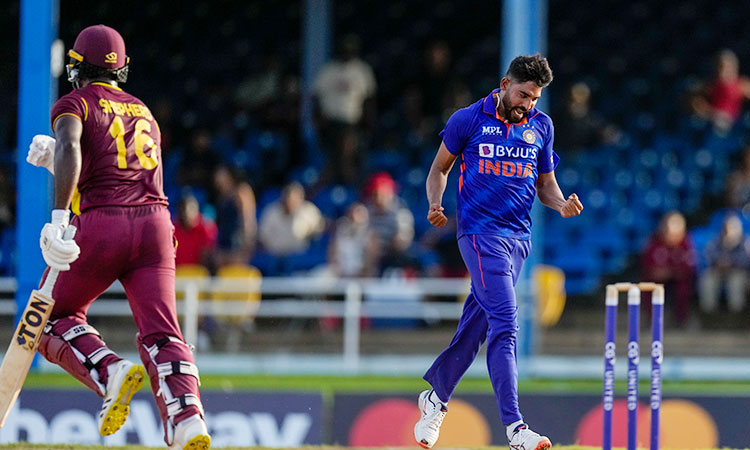 Mohammed Siraj celebrates after bowling the last ball against West Indies in the first ODI match at Queen's Park Oval in Port of Spain on Friday. AFP

India just managed to hold off the challenge of an inspired West Indies team with the under-strength visitors coming away with a three-run victory in the first One-Day International (ODI) of a three-match series at Queen's Park Oval in Trinidad on Friday.

Stand-in captain Shikhar Dhawan's 97 was the foundation of his side's total of 308 for seven which appeared to be more than enough at the halfway stage given that the hosts were just coming off a 3-0 drubbing at the hands of Bangladesh in Guyana a week earlier.

However, opener Kyle Mayers set the tone for the Caribbean side's chase with a top-score of 75 and with the rest of the batting order making important contributions the West Indies reached the final over needing 15 runs for victory.

Romario Shepherd, playing only because former captain Jason Holder was ruled out with COVID-19 in the morning, and Akeal Hosein managed to scramble 11 against the bowling of seamer Mohammed Siraj as they finished agonisingly short at 305 for six. 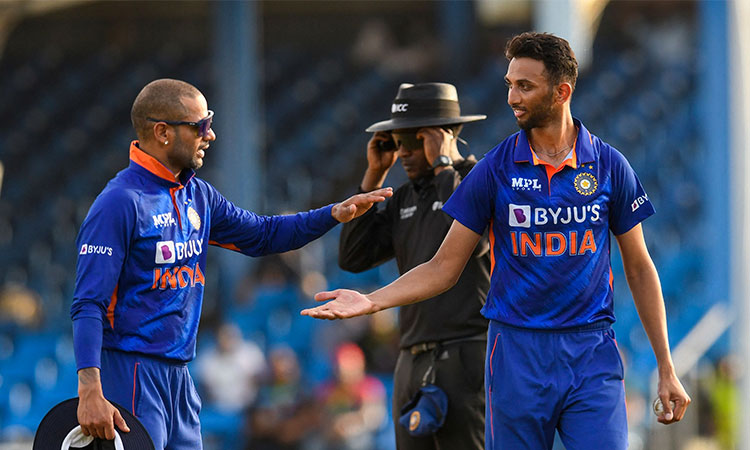 Shikhar Dhawan (L) and Prasidh Krishna agreed with plans made to blow during the 1st ODI match. AFP

Dhawan's innings off 99 balls with three sixes and ten fours earned him the "Man of the Match" award although the left-handed opener was not too pleased with his team's effort in the field.

"We had a few nerves obviously towards the end of the match and maybe we didn't stick to our plans as well as we should have because if we had done so, especially with a few runs given away on the leg-side, the game would have been over as a contest earlier," Dhawan said after the match.

Put in on a sweltering morning, he saw opening partner Shubman Gill (64) play most of the shots early on in a stand of 119 off 18 overs. Shreyas Iyer stroked his way to 54 before becoming the second wicket for Gudakesh Motie.

Motie had earlier dismissed Dhawan via an excellent diving catch by Shamarh Brooks at backward-point as India lost momentum when ominously poised at 213 for one in the 34th over. 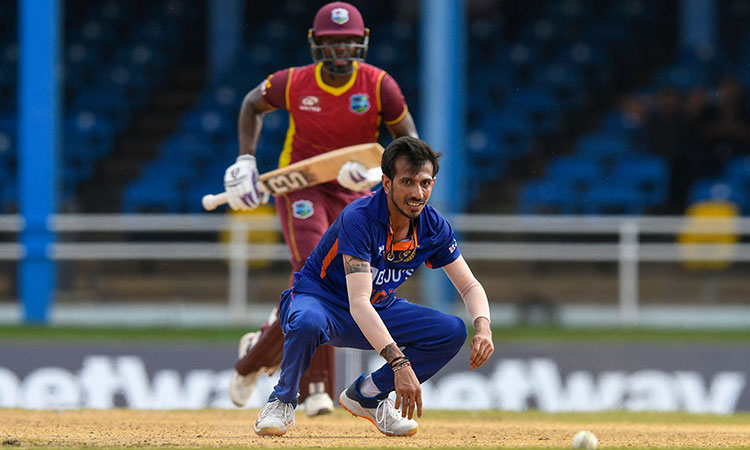 Yuzvendra Chahal attempts to stop Sharmarh Brooks (B) from running during the 1st ODI match. AFP

Motie and fellow left-arm spinner Hosein were the most economical of the West Indies bowlers although pacer Alzarri Joseph bolstered the home side's rearguard in the field with two important wickets.

"It's a bittersweet feeling," was West Indies captain Nicholas Pooran's summary of the match. "We've been talking about batting 50 overs and we did it this time but came up short. 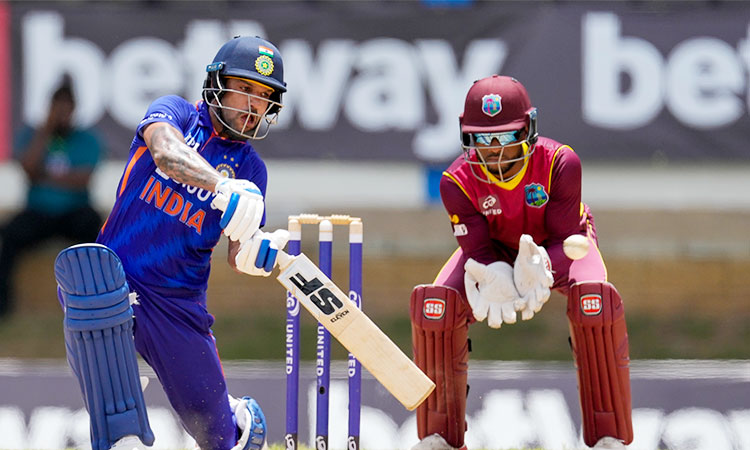 Shikhar Dhawan plays the shot to be caught for 97 runs by Shamarh Brooks during the first ODI match. AP

"Still, we really competed well against one of the best teams in the world and we need to keep on improving against this type of opposition if we want to get our ODI cricket back on track." 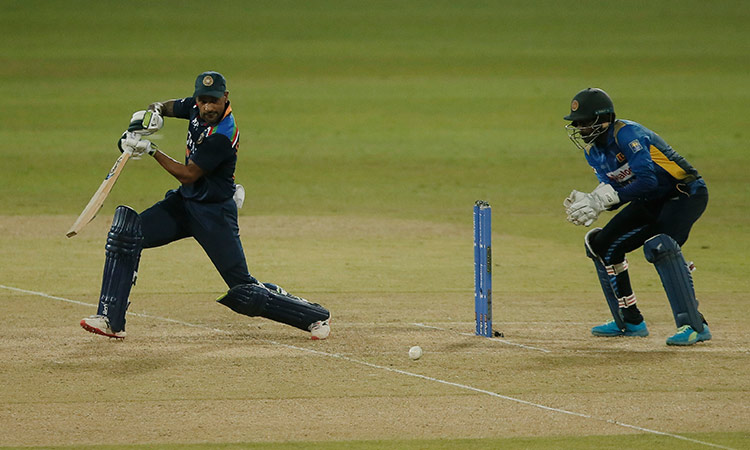 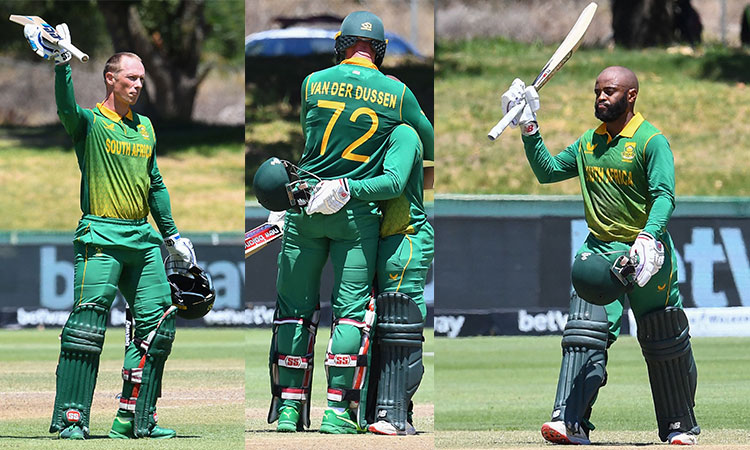 South African captain Bavuma made 110 off 143 balls but admitted that he struggled to time the ball consistently. India were on target for the first half of their reply but lost wickets in clusters and finished on 265 for eight. 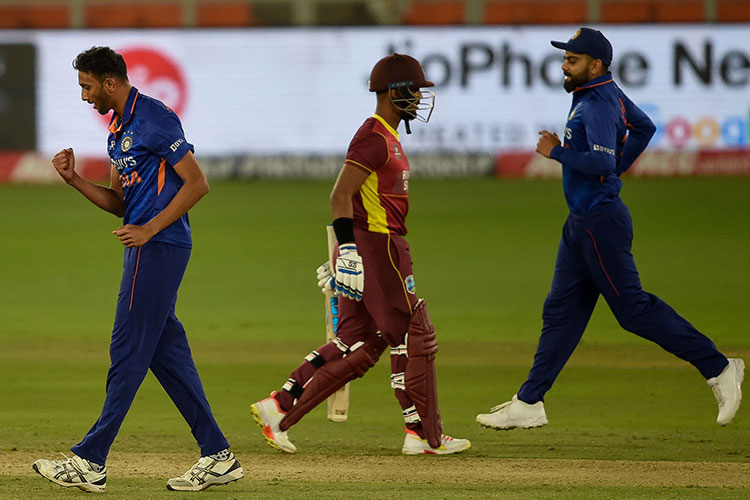