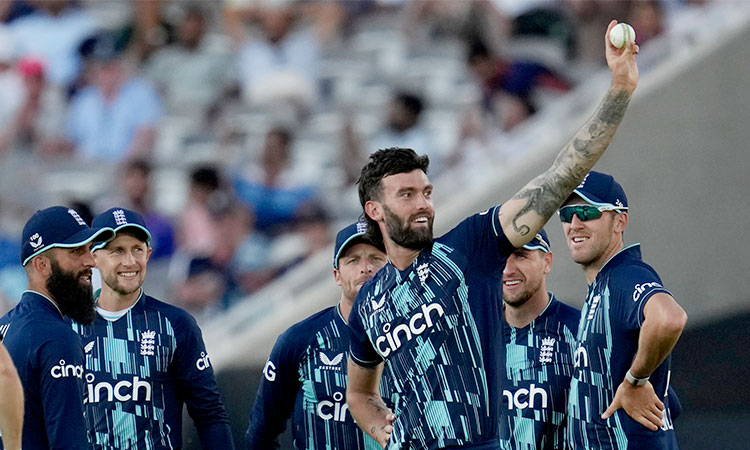 Reece Topley holds the ball up to celebrate taking his fifth wicket during the second ODI match at Lord's cricket ground in London on Thursday. AP

Reece Topley took 6-24, the best figures by any England bowler in a One-Day International (ODI), as the world champions bounced back to beat India by 100 runs at Lord's on Thursday.

India, chasing a target of 247, were dismissed for 146 with more than 11 overs to spare as England, two days after a humiliating 10-wicket defeat at the Oval, produced a vastly improved display to leave this three-match series level at 1-1 heading into Sunday's finale at Old Trafford.

The injury-plagued left-arm quick's figures were also the best by any bowler in an ODI at Lord's, beating Pakistan paceman Shaheen Shah Afridi's 6-35 against Bangladesh in a World Cup match three years ago.

Thursday's match fell on the third anniversary of England's 2019 World Cup final win at Lord's. But although their team contained five survivors from that XI, England's victory on Thursday was secured by players who weren't involved in a memorable Super Over success against New Zealand. 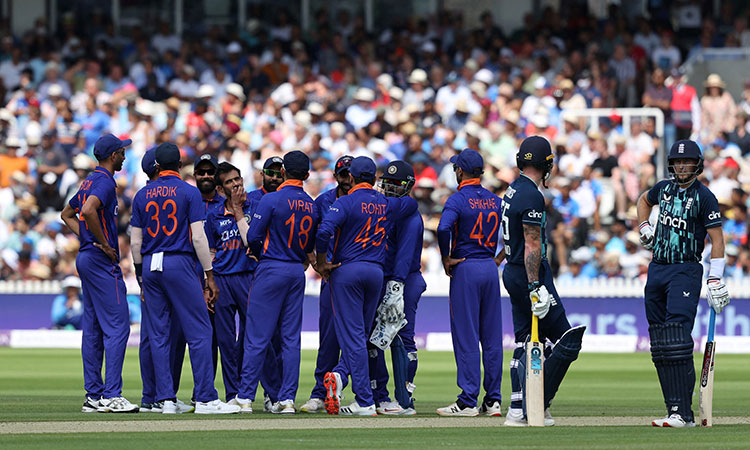 Yuzvendra Chahal (4th R) reacts as he watches with the hands on his mouth the decision by the umpire concerning the lbw on Joe Root. AFP

England, bowled out for just 110 at the Oval, were in danger of another uncompetitive total at 87-4.

But a seventh-wicket partnership of 62 between Moeen Ali, a member of the 2019 World Cup squad but not in the XI for the final, and David Willey, dropped on the eve of the tournament and replaced by the now-injured Jofra Archer, took them to 246 all out. Moeen top-scored with 47 and Willey made 41.

England's all left-arm new-ball duo of Willey and Topley, who also played no part in the 2019 World Cup, then reeled off four successive maidens at the start of India's chase, with the tourists slumping to 31-4 inside 12 overs.

India captain Rohit Sharma, who hit an unbeaten 76 at the Oval, was lbw for a duck to Topley, with dangerman Rishabh Pant also out for nought when he chipped Brydon Carse to mid-on. 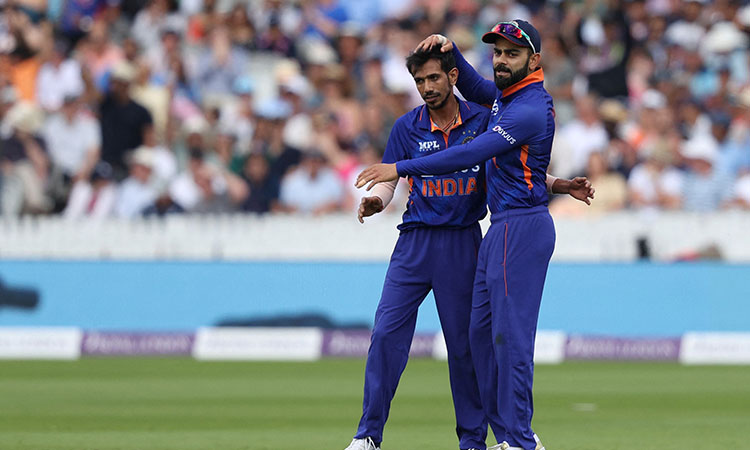 Former India skipper Virat Kohli, back after missing the Oval match with a groin problem, got off the mark with a straight driven four off Topley and later hit him for two more boundaries.

But on a day when the 33-year-old star batsman, without an international hundred since 2019, was left out of India's squad for an upcoming Twenty20 series against the West Indies, Kohli fell for 16 when caught behind off a Willey delivery angled across him. 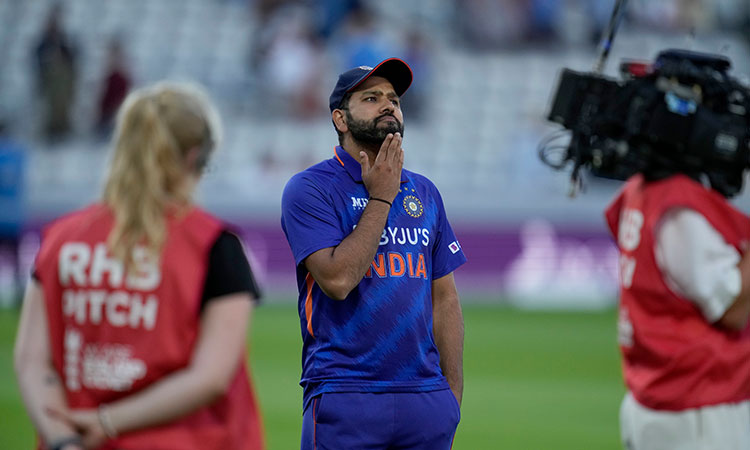 Rohit Sharma waits to do a post-match interview after the second ODI match at Lord's. AP

Any lingering hope of an India win ended when Mohammed Shami (23) and Ravindra Jadeja (29) were dismissed off successive deliveries to leave the tourists 140-8 before Topley, bowling full and straight, ended the match by taking two wickets in four balls to dismiss Yuzvendra Chahal and last man Prasidh Krishna. By that stage, Topley had already surpassed his previous ODI best return of 4-50 against South Africa at Port Elizabeth in 2016.

England had mainly been undone at the Oval by fast bowler Jasprit Bumrah's career-best 6-19. But leg-spinner Chahal led the way for India at Lord's with 4-47 from his maximum 10 overs.

That included a burst of 3-18 in 16 which accounted for Jonny Bairstow, Joe Root and Ben Stokes before Chahal ended Moeen's rescue mission with the bat. 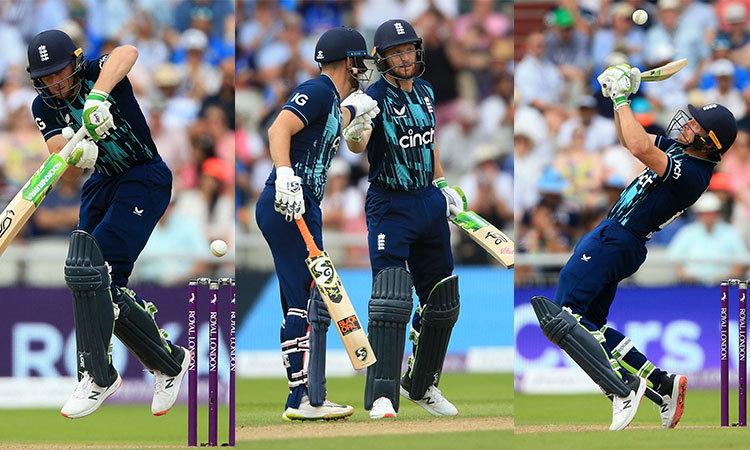 Buttler leads England to 259 in ODI series decider against India