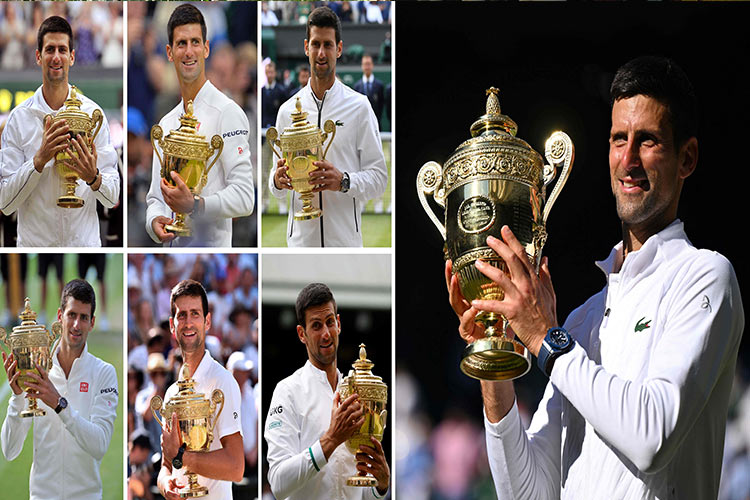 A combination of photographs created on Monday shows Novak Djokovic with his trophies. AFP

Roger Federer dropped out of the ATP rankings entirely for the first time in a quarter-century on Monday, while Novak Djokovic slid four spots to No.7 a day after winning Wimbledon for the seventh time.

Federer had appeared in the singles rankings every week since he made his debut at age 16 in September 1997, tied for 803rd, and held the record for most time at No.1 until Djokovic broke it.

Federer was 97th before play began at the All England Club but now has zero points because the rankings are based on a player's results over the previous 52 weeks - and he has not competed at all since reaching the Wimbledon quarterfinals a year ago. 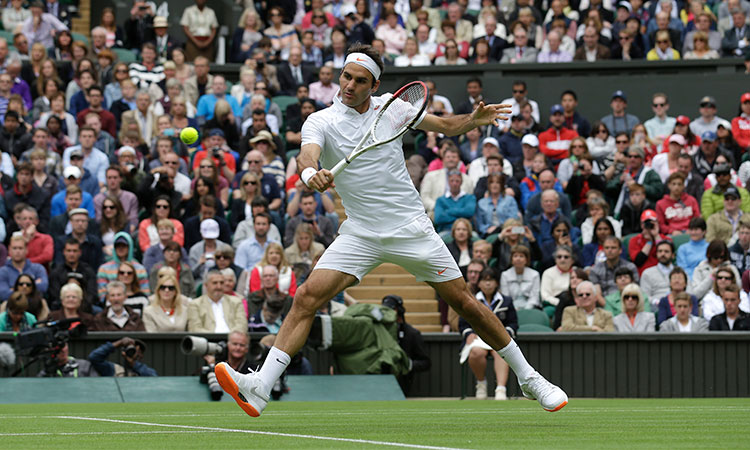 Roger Federer volleys a return to Victor Hanescu during their Men's first round singles match in Wimbledon, June 24, 2013. AP

Shortly after that loss, Federer had his third operation on his right knee in a span of about 18 months. Federer, who turns 41 on Aug. 8, intends to make his return to tournament play in his native Switzerland in October and said during an appearance at Centre Court last weekend that he hopes he can play at Wimbledon next year.

Djokovic's drop and that of runner-up Nick Kyrgios from No. 40 to No. 45 despite reaching the first Grand Slam final of his career are a result of the decisions by the WTA and ATP to not award any ranking points for Wimbledon in response to the All England Club's ban on athletes from Russia and Belarus over the war in Ukraine.

On Monday, Djokovic, Kyrgios and all other players lost whatever points they earned at Wimbledon in 2021, while not gaining any benefit from how they performed during this fortnight.

So Elena Rybakina's first Grand Slam title did her no good in the WTA rankings; she remained at No. 23, where she became the second-lowest women's champion at the grass-court tournament in the professional era, which began in 1968.

The woman she beat in Saturday's final, Ons Jabeur, went from No. 2 to No. 5, even though this was her best showing at a major.

Last year's losing finalist, Karolina Pliskova, fell eight spots to No. 15, and some women who moved ahead of her achieved their career highs on Monday, including Australian Open runner-up Danielle Collins at No. 7, US Open champion Emma Raducanu at No. 10, and French Open runner-up Coco Gauff at No. 11.

Daniil Medvedev, who is Russian, stayed atop the men's rankings after not being allowed to compete at Wimbledon. He won last year's U.S. Open and was the runner-up at this year's Australian Open. 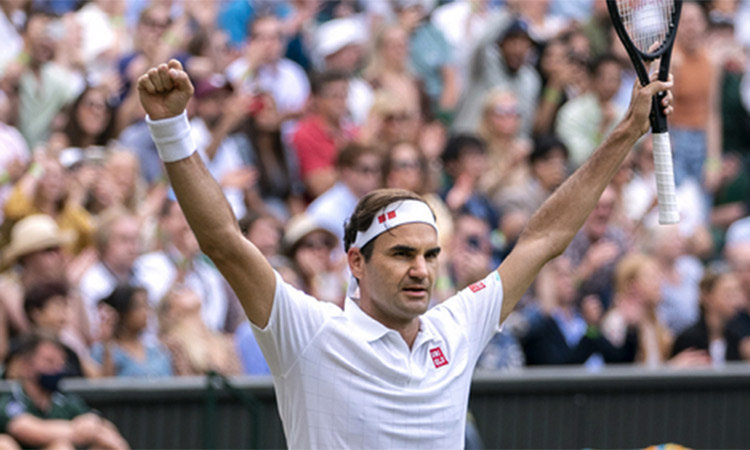