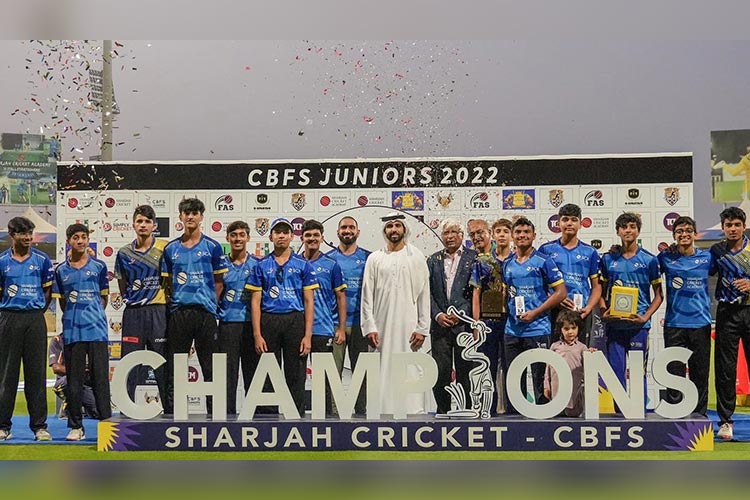 Sharjah Cricket Academy ‘A’players pose with the trophy along with the dignitaries after winning the final of the Sharjah CBFS juniors 2022 Under-1 title.

Skipper Aayan Afzal Khan once again led from the front through another match-winning unbeaten 63, and along with opener Aryan Saxena, who hit 60, they ensured a six-wicket win over Victoria Cricket Academy

Aayan Afzal Khan, who had scored 61 not out against BE Spartans and had an unbeaten 83 against Desert Cubs B in the earlier matches, received the Player of the Tournament award and the winners’ trophy from Khalaf Bukhatir, CEO Sharjah Cricket and Mazhar Khan, General Manager Sharjah Cricket during the colorful presentation ceremony.

Victoria Cricket Academy got restricted to 129 for 6 despite their opener Yousaf Ahmad Khan’s fine knock of 51.

This consistent aggressive opener bagged the best batsman of the tournament award. He had hit 59 against YTCA Goltay and an impressive 111 against Desert Cubs B in recent matches.

Victoria Cricket Academy opted to bat after winning the toss. They lost their opener Raafey Awazi to Harsh Desai for 4.

Opener Yousaf Ahmad Khan and his captain Deepak Raj put on a 59 runs partnership for the second wicket.

After this, the Sharjah Cricket Academy bowlers strangled the run flow through some tight bowling although Mohammad Khan still managed to score 16 runs. Abdullah Ismail went on to pick his third wicket when he clean bowled Muhammad Hasher for 8.

Khushi Sharma, the UAE women’s team cricketer, kept the scoreboard moving but unfortunately was run out for 10.

Aayan Afzal Khan then had Fadil Ahmed stumped by wicketkeeper Mudit Agarwal to restrict Victoria Cricket Academy to 129 for 6 in 20 overs.

Though their striker bowler Zainullah Khan failed to get a wicket, he gave away just 21 runs from his four overs and went on to bag the best bowler of the tournament award.

Sharjah Cricket Academy openers Aryan Saxena and Aayan Afzal Khan chased the total through a positive approach. Aryan Saxena went for his shots to dominate the bowling. Aayan Afzal Khan too played some lovely shots especially his pull shots to put on a partnership of 101 in 10.4 overs. Aryan Saxena fell to Khushi Sharma for 60 off 40 balls after scoring nine powerfully hit boundaries and a six.

One-drop Mudit Agarwal was run out through a fine fielding from Yousaf Ahmad Khan for a duck. Harsh Desai too followed falling to Shivansh Pandey for 2. Varun had Ayan PC stumped by wicketkeeper Raafey Awazi for 1 but Aayan Afzal Khan stood steady. He carried the team to the target with five overs to spare. His unbeaten 63 came off 37 balls with six boundaries and three sixes.

Speaking about his team’s performance and his consistent performance that won them the coveted trophy, Aayan Afzal Khan said: “I am happy that I scored well in the last two matches and all the others too contributed.  We played very well as a team. This tournament was an excellent one for all of us. We have got a fine bowler in Zainullah, a good opener in Aryan Saxena, and an excellent wicketkeeper in Mudit Agarwal. We thank our coaches for the support. It is a tournament which will be a big boost for everyone.”

Victoria Cricket Academy skipper Deepak Raj, after receiving the runners-up trophy, said: “It was a great tournament for us. Reaching the final is not an easy thing. We had a great start today but unfortunately we could not capitalize on it in the end. Well played Sharjah Cricket Academy.”

The live coverage of this junior tournament was watched by fans from all around the world. The CBFS junior event made up of Under-12, Under-14 and Under-17 tournaments, staged with the slogan “A platform to perform”, and had 60 matches, thus concluded at the historic Sharjah Cricket Stadium. 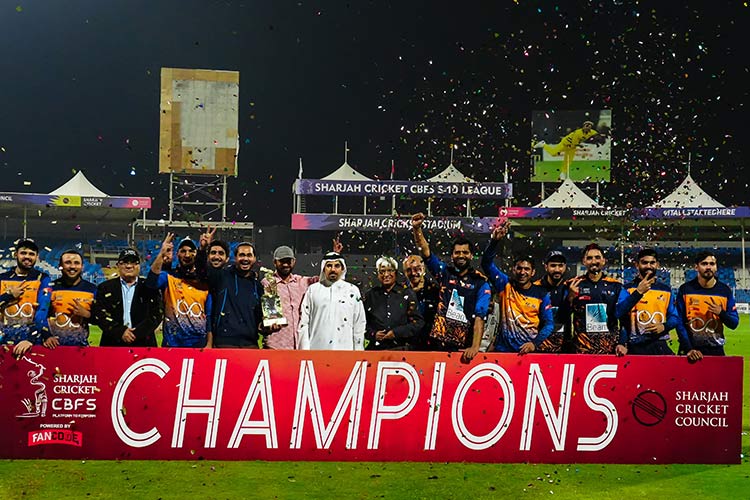 The unconquerable MGM Cricket Club emerged champions in the CBFS powered by Fancode S10 tournament through a five-run last over thriller against InterGlobe Marine.