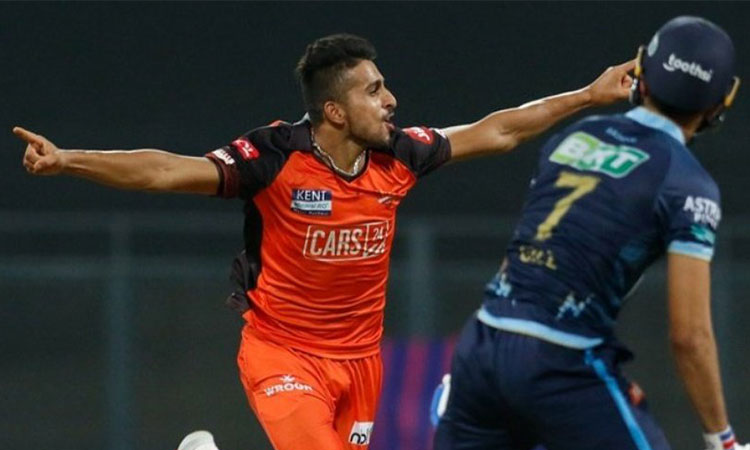 Umran Malik celebrates after taking a wicket during an IPL match. File

Despite the presence of specialist bowlers like Bhuvnehwar Kumar, Avesh Khan, Harshal Patel along with Jasprit Bumrah, former India captain Dilip Vengsarkar feels that pace sensation Umran Malik deserves to be in the Indian squad for the T20 World Cup.

He added that it's important to give an opportunity to Malik who has already proved himself with his impeccable pace bowling during the IPL and now team management should give him a chance to play at the international tournaments.

Umran was handed a maiden call-up for the five-match T20I series against South Africa at home, but the pacer did not get a chance. However, Malik is also part of the Hardik Pandya-led Indian team which is set to play two T20Is in Ireland.

When asked Umran's inclusion in the playing squad against Ireland, Vengsarkar who was present during a panel discussion with members of the 1983 World Cup-winning team on the occasion of the 39th anniversary of their triumph at Lord's, said, "I hope so because he (Umran) is a very exciting talent. He did well in the IPL and he deserves a chance as he looked the best bowler in the format. I hope he is on the plane and I am sure he will do well if given an opportunity." "He (Umran) is young and raring to go. You must give an opportunity to someone who is in form. He is young, keen to play and hungry for success," he added.

"There is definitely going to be a bigger bunch of fast bowlers coming through now. And he (Umran) should be given a chance straight away because he has proved that he is quick and if you saw him bowl some of the yorkers in the IPL that was brute force. So you cannot keep a youngster out for that long," Binny said.

Meanwhile, India cricket team chief coach Rahul Dravid and former pace bowler Irfan Pathan feel these are exciting times for Indian cricket, given the number of young fast bowlers emerging on the scene, and hoped that a couple of them might go on to play in the upcoming ICC T20 World Cup in Australia later this year.

Among the notable pace bowlers to emerge following the conclusion of the IPL 2022 include Umran Malik, who had a 157kmph delivery for Sunrisers Hyderabad, while Arshdeep Singh, Prasidh Krishna and Kuldeep Sen, among others, too have shown tremendous promise.

Dravid, opening up about his coaching tenure so far with the India team and working with an array of captains and pace bowlers in a short span of time, said, "It (coaching) has been quite exciting, it has been good fun, I must say.

"It's been challenging as well, we have got six captains in the last eight months, which actually wasn't the plan when I started, but it's the nature of the number of games we are playing, it's the nature of Covid, so I have had to work with quite a few people, it has been great fun.