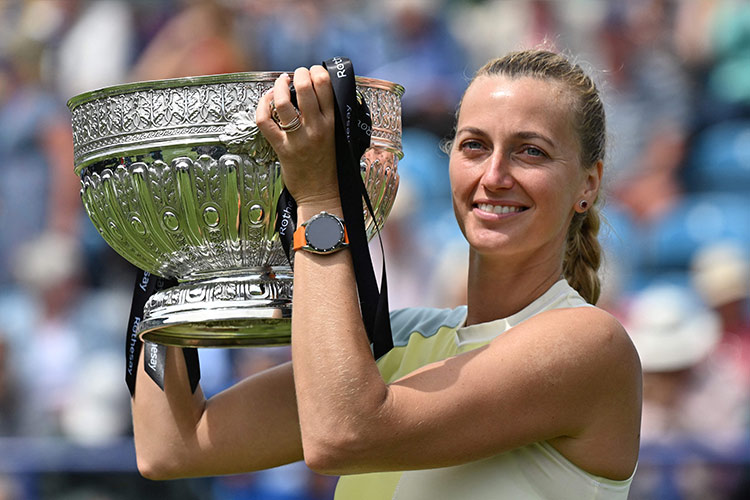 Petra Kvitova celebrates with the trophy after winning the final against Jelena Ostapenko at the Eastbourne International tennis tournament in Eastbourne on Saturday. AFP

The 32-year-old, who lost the 2011 Eastbourne final to Marion Bartoli, ended Ostapenko's reign as the women's champion at Devonshire Park in emphatic fashion, demolishing the Latvian with her booming serve and fierce forehands.

"I had already experienced losing in a final, so I guess I am lucky. Playing on the grass is very special for me, especially when you step onto a beautiful court such as here," Kvitova said.

"It's really nice to play in front of the people again; in the pandemic it was a really tough time, it's such a better feeling." 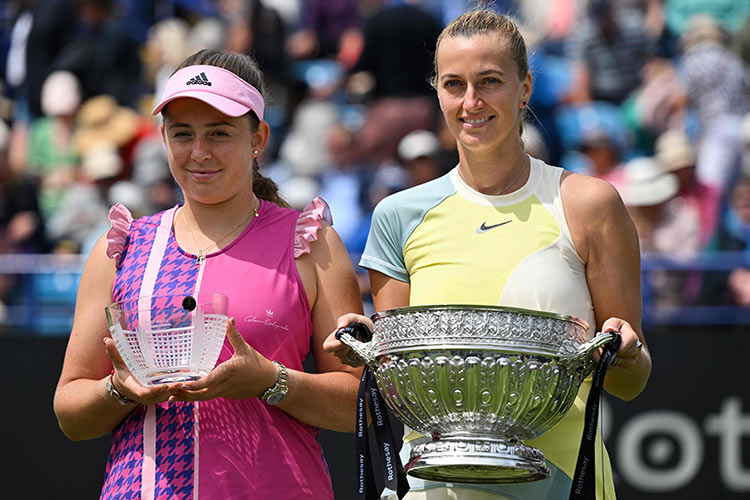 Petra Kvitova and second-placed Jelena Ostapenko (left) pose with their trophies on the podium at the Eastbourne International tennis tournament in Eastbourne on Saturday. APF

Kvitova's 29th career singles title is a major confidence boost ahead of her Wimbledon first round meeting with Italian Jasmine Paolini.

The Czech last reached a Grand Slam final at the Australian Open in 2019.

The last player to win Eastbourne and go on to triumph at Wimbledon in the same year was the late Czech player Jana Novotna in 1998.

Asked about her compatriot, who died at the age of 49 in 2017, Kvitova said: "It's always nice to think about Jana, of course.

"She had so many great matches, not only here but in Wimbledon as well.

"I'm glad that we are able to play such a great event as here. It's the best preparation for Wimbledon."

Despite the one-sided defeat, Ostapenko, scheduled to play in the women's doubles final alongside Ukrainian partner Lyudmyla Kichenok later on Saturday, was pleased with her overall performance on the south coast.

"She played really well, so congrats. Of course for me it was not the result I wanted, but in general I have to take the positive out of this week because I think I played some great tennis, even though today didn't go my way," Ostapenko said. 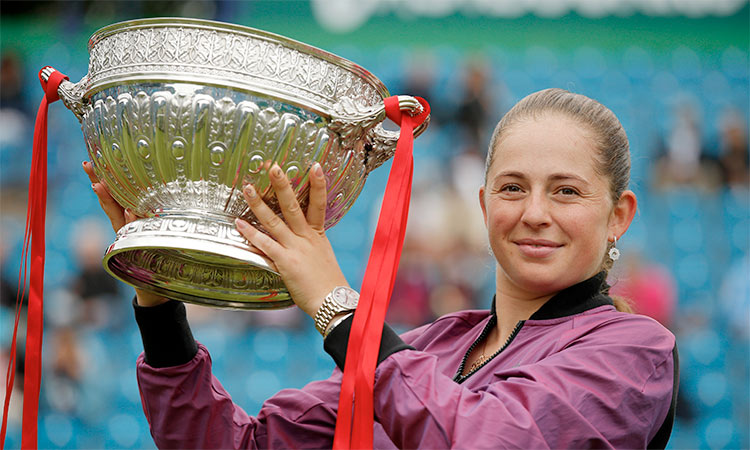 London: Roger Federer is still not sure whether he will compete at the Tokyo Olympics, saying on Saturday that he and his team plan to “reassess the situation after Wimbledon.”