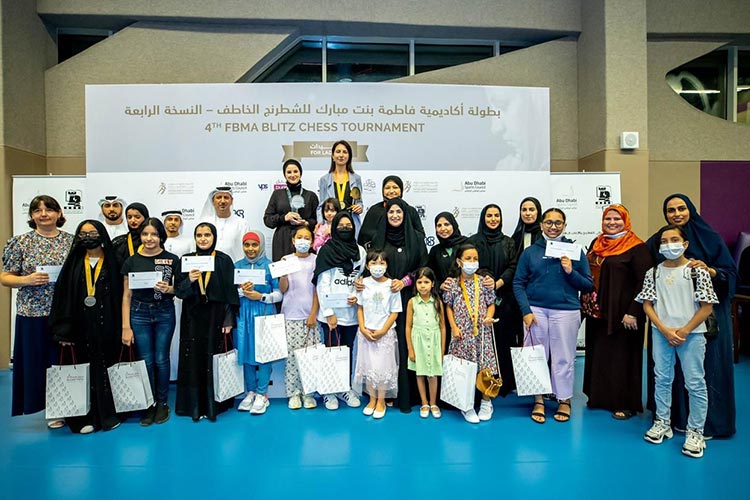 Winners of the 4th FBMA Blitz Chess Championship pose with the officials during the presentation ceremony.

The tournament attracted over 100 registered players from 17 countries and carried a prize purse of Dhs33,000.

The tournament was under the patronage Her Highness Sheikha Fatima Bint Mubarak, President of both the General Women’s Union and the Supreme Council for Motherhood and Childhood, and Chairwoman of Family Development Foundation ‘Mother of the Nation,’ and Shaikha Fatima Bint Hazza Bin Zayed Al Nahyan, Chairwoman of FBMA, President of the Abu Dhabi Ladies Club and Al Ain Ladies Club.

Following the successful end of the tournament, the FBMA thanked their partners, Abu Dhabi Sports Council and Abu Dhabi’s Chess and Mind Games Club, for their support of the event.

Maria produced a superb performance during the nine rounds of the championship in what seemed to be an unstoppable streak, which led to her being crowned champion.

She overcame Angelia Stojanovic of Serbia as the latter finished second overall.

Kosha Cheksi far exceeded what was expected of her age and was awarded the "youngest player award" for participating at 4 years of age.

Six additional awards were distributed for the best Emirati players in the tournament, a list that included world-ranked names, an indicator of high technical level.

People of determination also competed in the tournament.

Naema expressed her satisfaction with the organization’s consistent efforts in organizing local and international events.

She emphasized that all the participants had potential, which made the event exciting for all the fans.

"The players showcased a high caliber of talent and potential during the tournament. Equally as impressive was the participation of the youngest players (4 and 5 years old), in addition to the attractive number of international participants.

"Firstly, and most importantly, we dedicated a segment for people of determination in the competition and were keen that they take a strong part on this day.

"We thank everyone for their efforts as this tournament complements all the sports programmes and plans developed by the academy's administration to promote a healthy lifestyle.

"The number of participants increased by almost 20 percent from last year, which pushes us to continue progressing and overcoming challenges."

Amal said: "Many sports, cultural and social events that the Fatima Bint Mubarak Women's Sports Academy is keen to organize in the capital Abu Dhabi are commensurate with the interests of women of all ages and nationalities in order to encourage sport and make it a daily way of life.

"The 4th FBMA Blitz Chess Tournament is a series of successful events, and there will be many more to follow in the foreseeable future. Everyone interested should stay tuned to the news and developments of the academy through its official platforms."