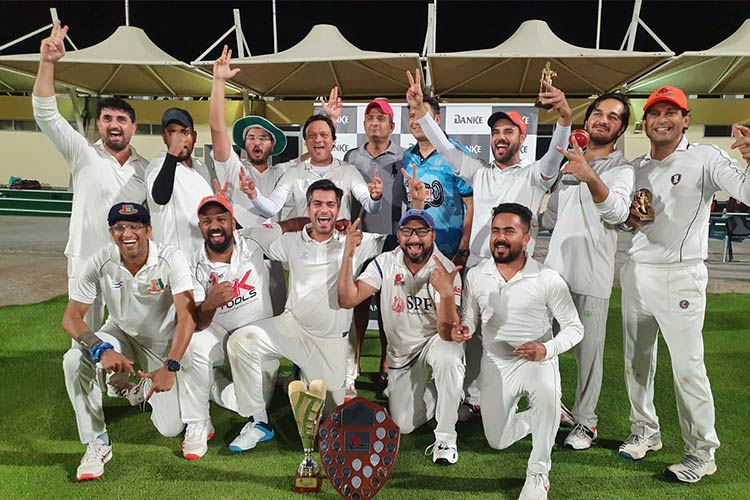 Players of Banke celebrate with trophy after their victory.

Banke won the toss and reached 190 all out in 24.4 overs. Sujit Salian played a brilliant knock of 64. Harvinder Singh (32), Mohd Saif (24) and Man of the Tournament Mahendra Mota (23) also chiiped in with vital contributions towards Banke’s healthy total.

Harsh Bobade was in the thick of the action as he bowled his heart out for Jumeirah bagging four wickets. He also had a hand in running out a batsman and to put the icing on the cake took a superb catch. He ripped through the batting line-up of Banke.

Harsh was not done yet. He struck 41 runs and along with Ramandeep Sharma kept Jumeirah’s chase alive. But Jumeriah batsmen failed to convert their starts into big scores. They kept on losing the wickets  at regular intervals and failed to get the partnership going.  The target seemed unreachable and Jumeriah could muster only 169 for 8 in 25 overs as Banke lifted the title.

It was a good toss to win for Porush Jhunjhunwala but the captain lasted only eight balls before falling to Ramandeep Sharma for 2.

Harvinder Singh who was later adjudged the best batsman of the tournament didn’t let the early dismissal of his skipper affect his batting as he went for his shots and put the pressure back on Jumeirah. He and Mohd Saif raised 42 runs for the second wicket. Saif departed for 24 from 25 balls with two boundaries.

Harvinder meanwhile galloped to 32 from 26 balls (1 six and four fours) and laid the foundation from where Sujit Salian and Mahendra Mota took charge. Salian blasted his way to 64 from 41 balls which came from a six and six fours. His innings changed the course of the match and earned him the man of the final title.

Ramandeep and Harsh tried in vain but Vinay Tolani (3-31) and Mashood CTK (2-35) kept taking wickets at regular intervals to dampen Jumeirah’s hopes of a victory.

League of Mammoth is one of the oldest and most followed tournament at the domestic circuit. Local teams of the corporate houses, clubs and academies take part in the biennial tourney, whch is permanent feature of the UAE cricket roster.Brief scores (final): Banke beat Jumeirah Mammoths by 21 runs.