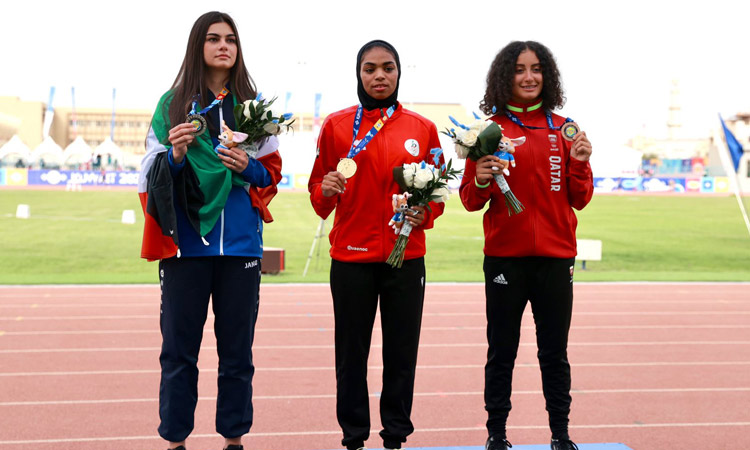 Latifa Al Kaabi (centre) celebrates after winning gold in the triple jump competition of the Gulf Games in Kuwait.

Representing the UAE, the Sharjah Women's Sports Club players clinched eight medals, including two gold, two silver and four bronze, during their successful participation in the third edition of the Gulf Games, which were held in Kuwait.

The Sharjah Women's Sports Club athletes showed their prowess throughout the competition, contributing to the UAE medal count with 8 of the 22 medals earned across all sports thus far, and the achievement is that the players have won all but one of the athletics medals in the Gulf event.

Despite the difficulties they faced and the timing of competitions, such as the sandstorm that coincided with the first day's events, Sharjah Women's Sports Club players demonstrated a wonderful example of dedication during their participation in the Gulf Games.

The players' commitment, training, and thorough preparation throughout the year at camps made a significant contribution to the achievement of this remarkable triumph.

Fatima Al Hosani stated that continuous training at the Sharjah Women's Sports Club under the supervision of the technical department, as well as the club's competitions throughout the year, led to this achievement and credit goes to the unwavering support of Her Highness Sheikha Jawaher Bint Mohammed Al Qasimi, wife of His Highness the Ruler of Sharjah and Chairperson of the Sharjah Women's Sports Foundation.

Latifa expressed her happiness after achieving the gold medal in the triple jump and the silver in the long jump competitions, respectively.

Runner Fatima Al Balushi emphasized the importance of psychological and mental factors, as well as focus, prior to contests, in achieving the best results and the intended aim of participation.

The two medals came in the individual kata competition for the female category, through the player Joumana Al Agouz, who won the silver medal in the competition, while Fajr Ayoub won the bronze medal.