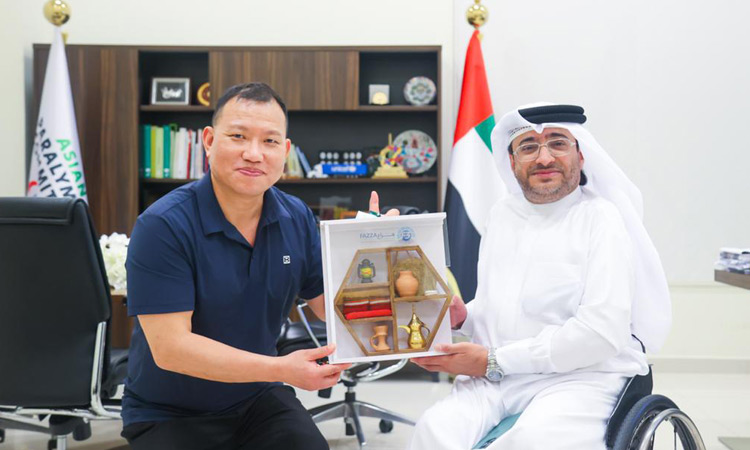 Majid Al Usaimi, President of the Asian Paralympic Committee and CEO of the Dubai Club for People of Determination presents a shield to a Chinese Olympic Committee official.

Majid Al Usaimi, President of the Asian Paralympic Committee and CEO of the Dubai Club, briefed the visiting delegation during the tour on the various facilities, initiatives, activities and sports programmes of the club, and harnessing all the capabilities of the members to participate in local and international sports competitions.

The delegation witnessed part of the training of some of the club’s teams and watched a documentary film about the club’s various achievements and the most prominent tournaments it has hosted including the successes achieved by the Fazza Championships, that has attained a prominent position on the world map.

Usaimi, who presented the Dubai club’s shield to the head of the delegation, expressed his happiness on the delegation visit, highlighting that China's choice of the UAE to set up its preparatory camps in preparation for Paris 2024 Games is “an indication of the quality of sports facilities and public services available in the country, especially as the Chinese teams are at the forefront of the Olympic and Paralympic Games”.

He also discussed with the delegation means of joint cooperation and exchange of experiences in line with the latest scientific visions to achieve the common goals between the two organisations.

The APC President also revealed that the delegation, during its visit to the Asian Paralympic Committee headquarters, praised the development of the Asian Para Sport and the UAE's role in supporting and developing ‘People of Determination’ and providing full empowerment in the society.

Meanwhile, Hao Cheng stressed that the leadership of the largest organization in Asia has touched all the needs for development of para sport in the region besides a comprehensive vision in empowering the para-athletes.

Cheng praised the efforts of Zhang Haidi, Chairperson of China Disabled Persons' Federation, in bringing positive results in developing the system of people with disabilities in their public and sports lives in China.

He also applauded the distinguished relations between the UAE and China in all fields, including the sports field, as the past period witnessed great cooperation in the field of hosting tournaments and training camps and exchanging experiences.