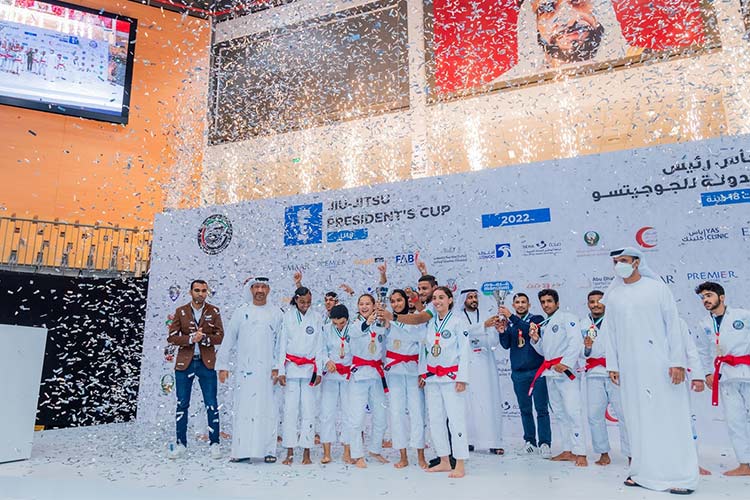 Winners of Jiu-Jitsu President’s Cup for Under-18s celebrate with the trophy.

Just seven days after the Under-16 competition and in front of a raucous crowd of fans, parents, and friends, the nation’s best young athletes aged 16 and 17 and hailing from multiple UAE clubs and academies fought passionately at the Jiu-Jitsu Arena in Abu Dhabi. The competition followed an open belt system.

After a great performance on the mats, Baniyas Club won the Men’s division, forcing Al Ain to settle for second and Sharjah Self-Defence Sports Club to take third.

“One of the most noteworthy aspects of this tournament is the extraordinary performance of the women athletes and their technical level,” said Fahad Ali Al Shamsi, secretary-general of the UAE Jiu-Jitsu Federation. “This is a result of the Federation’s efforts to increase participation of the women’s team in local and international tournaments.

“Allocating separate competitions for the Under-18 category during the current season is proving highly beneficial. This comes within the UAEJJF’s framework of supporting and refining talents, as well as providing a competitive environment that paves the road for achieving excellence at all levels.”

Salem Nayef Al Kathiri, executive director of Baniyas Club, added: “The President’s Cup is close to our hearts, therefore clubs competed furiously to win the title. It was our ambition to win the tournament and retain the title. We overcame many challenges, but thanks to the constant support of the club’s management and the efforts of our players, we were able to win the championship. We congratulate Al Ain Club and its players on an outstanding performance also.”

Raja Al Muhairi, who helped Sharjah take the women's title, and Khaled Muhammad, men’s player from Baniyas, both put their titles down to the intensive pre-competition training that had gone into their preparations.

“The achievement was the result of following an aggressive training programme that made us fully prepared to confront our tough competitors, who also prepared strongly for the tournament,” said Muhairi.

Muhammad added: “I'm delighted for securing first place and proving our quality by retaining the prestigious title. I thank God for this victory.  My colleagues and I put in a lot of effort in training to prepare for this competition, which is one of the most important local championships held under the UAEJJF's supervision.”

Following the competition, an awards ceremony for the winners was held in the presence of Mohamed Salem Al Dhaheri, vice chairman of UAE Jiu-Jitsu Federation. 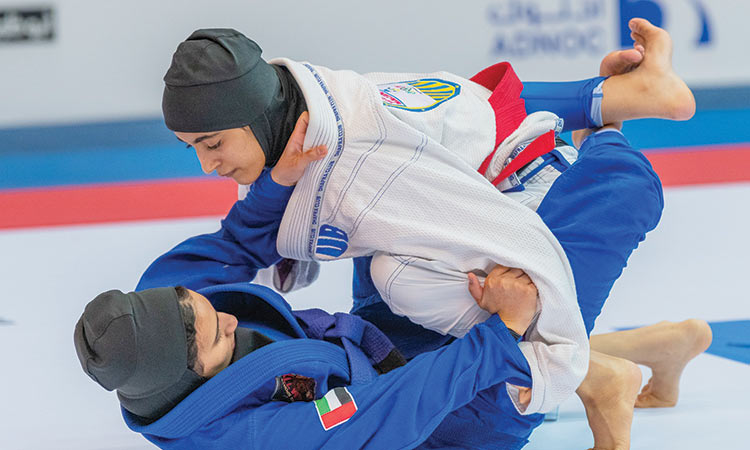 The 2021 Jiu-Jitsu President’s Cup promises to be one of the most exciting editions to date following an exhilarating first round at Abu Dhabi’s Jiu-Jitsu Arena that saw top-class action from male and women athletes from a number of clubs and academies. 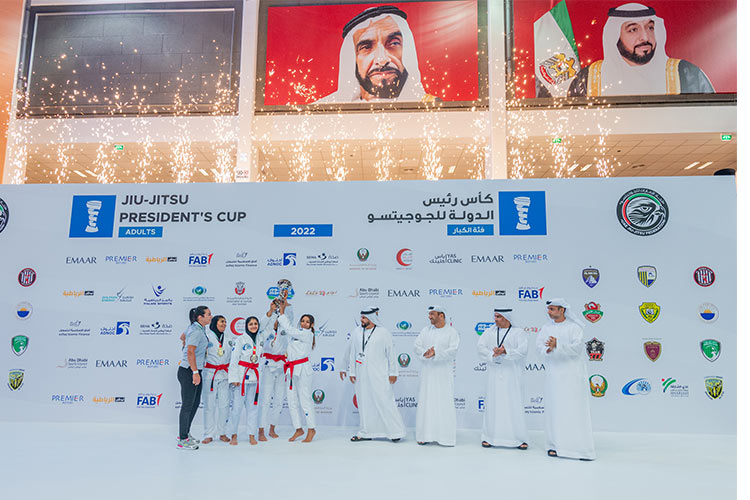 Baniyas Club dominated both the Men’s and Women’s divisions on a spectacular evening filled with excitement both on and off the mats at Abu Dhabi’s Jiu-Jitsu Arena.