Zverev crashes out at Indian Wells as Rublev, Swiatek advance 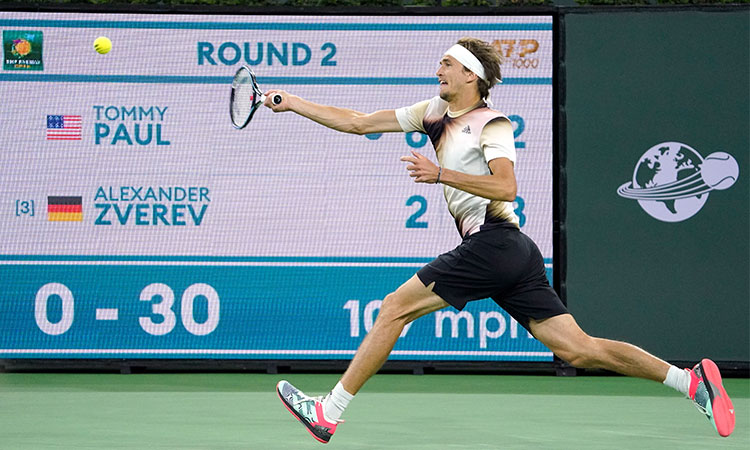 After dropping a first set in which Paul mercilessly punished his second serve, Germany's Zverev levelled the match with the only break of the second set in the 10th game.

After holding his serve to love three times and breaking Paul in the sixth game of the third Zverev appeared to be heading for victory.

But the German immediately served four double faults to hand the break back and Paul dominated the tiebreak with the same aggression he showed in the opening set.

"I played a really high level today," said Paul, who notched the biggest win of his career. "I knew how I wanted to play him, so I came out and executed it well.

"It got kind of crazy there in the second set, and I got lucky a little bit in the end, but I played well when it came down to the breaker, so I'm pretty happy with my performance."

Zverev was playing his first tournament since he was disqualified from the Mexico Open in Acapulco after losing his temper and repeatedly smashing his racquet into the umpire's chair.

The 24-year-old Tokyo Olympic gold medallist was fined $40,000 for verbal abuse and unsportsmanlike conduct. A further $25,000 fine and an eight-week ban were suspended provided he does not incur a further code violation for 12 months. 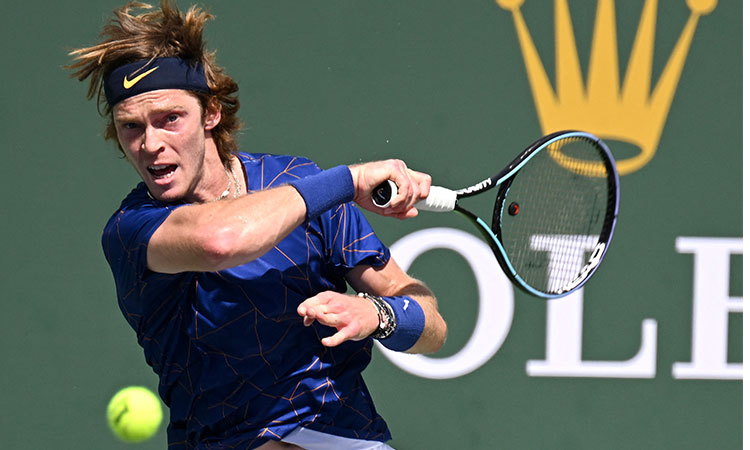 Andrey Rublev hits a shot during a victory Dominik Koepfer in a second round match. Reuters

Rublev, on the rise after titles in Marseille and Dubai this year, was 4-2 down before breaking 51st-ranked Koepfer twice to pocket the first set.

He finished with 32 winners against the German and won 11 of 15 points at the net to put the match away.

Bublik, coming off his first career ATP title at Montpellier in February, beat Murray for the first time in three career meetings.

There was more disappointment for Murray's British compatriot Emma Raducanu, who was beaten in the third round by Croatian Petra Martic 6-7 (3/7), 6-4, 7-5.

The 19-year-old Briton, who stormed to an unlikely US Open title as a qualifier last year, served for the match at 5-4 in the third.

But the 13th seed couldn't muster a match point and lost the next three games, a string of forehand errors spelling the end of her challenge in a final loss of serve.

It was the latest setback for Raducanu, who was ousted in the second round of the Australian Open in January and suffered a hip injury at Guadalajara last month.

Martic, ranked 79th in the world, notched her first win over a top-20 player in more than two years.

"I really wanted it so bad," Martic said "I'm just happy I stayed calm when I was not playing so good. Because I think it was up and down for both sides."

Third-seeded Iga Swiatek of Poland, the highest-ranked player left in the women's field, struggled early but dominated late in a 6-7 (3/7), 6-2, 6-1 victory over Denmark's Clara Tauson. 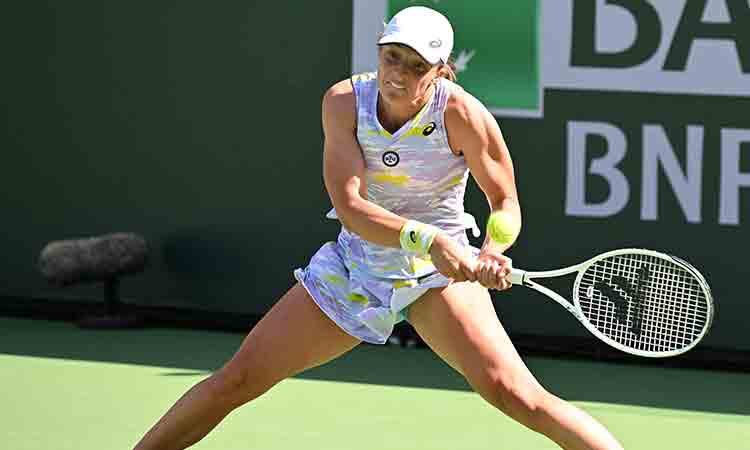 Iga Swiatek hits a shot during her third round match against Clara Tauson. Reuters

Halep said the she was pleased with her performance in the tricky conditions. "I think I played a smart tennis," said the Romanian, who saved all four break points she faced.