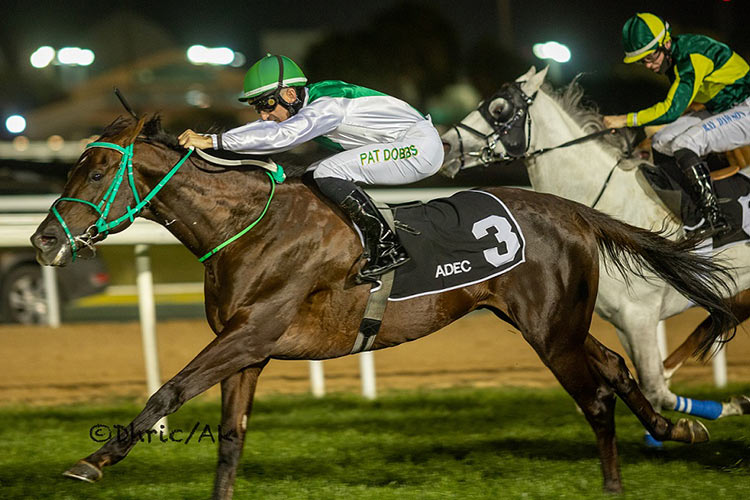 Saddled by Ibrahim Aseel for Ziad Galadari, the 7yo responded gallantly to the urgings of Pat Dobbs and had the race in safe keeping entering the final 75m.

It was a fifth career victory for the 7yo and third on turf but by far his most significant and connections were obviously delighted with the big race success.

Dobbs said: “That was a lovely spare ride and he travelled superbly throughout before really quickening. I was quite impressed by him.”

In the 2200m The President Cup Prep, a conditions contest, Richard Mullen produced Mujeeb with a perfectly timed challenge to hit the front entering the final 200m after which they never looked in any danger for Salim Al Ketbi and President His Highness Sheikh Khalifa Bin Zayed Al Nahyan.

Settling nearer last than first in the first half of the race, the homebred 5yo made smooth progress leaving the back straight before throwing down his decisive challenge over the final 300m.

It was a third career success, from just ten starts, but first since December 2020.

Afforded prestigious status, the Abu Dhabi Equestrian Gold Cup only attracted a field of six but it produced a thrilling finish with Jawal Al Reef snatching victory right on the line to deny Hameem a repeat victory in the race.

Sporting the silks of Saif Asheer Ali Sulaiman Al Mazrouei. Antonio Fresu was in the saddle for trainer Abubakar Daud.

A 9yo entire, the horse was registering a sixth career success, all in the UAE and fifth on the Abu Dhabi turf.

Bernardo Pinheiro, riding in the colours of Mohamed Mosabbah Mohammed Al Mazrouei for trainer Qaiss Aboud, probably never saw another rival winning the opening 1000m maiden for horses foaled in the UAE aboard MM Al Balqaa, a first ever local winner for the owner and maiden success this season for the trainer.

After a fast start, the 4yo filly was clear of her ten rivals by halfway and never looked likely to be caught, opening her account at the fifth attempt.

Tadhg O’Shea then employed virtually identical tactics in the second division of that 1000m maiden for horses born locally, soon in front aboard 5yo homebred debutant AF Rasam and never looking in any real danger for his main employer Khalid Khalifa Al Nabooda.

There was a distinct feeling of deja vu after the following 2200m handicap for horses in private ownership in which O’Shea again made every post a winning one, albeit only just, on the same connections’ AF Mukhrej.

The only Thoroughbred race was a 1400m maiden and final race on the card, Mullen completing a double aboard Nibraas, trained by Nicholas Bachalard for Sheikh Ahmed Bin Rashid Al Maktoum, patron of Jebel Ali Racecourse.