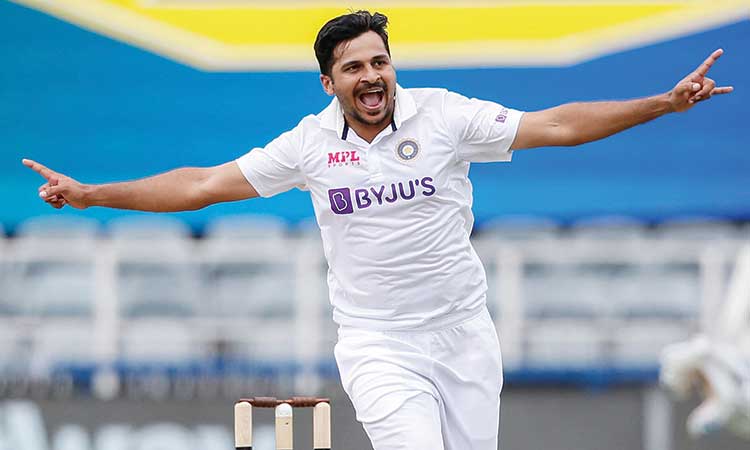 Johannesburg: Veteran batsmen Cheteshwar Pujara (35 not out) and Ajinkya Rahane (11 not out) took India to 85/2 at stumps, leading South Africa by 58 runs on Day 2 of the second Test match at The Wanderers Stadium, on Tuesday.

The highlight of the day was Shardul Thakur, whose sensational and a career-best 7 for 61 bowling figures helped India make a comeback in the ongoing second Test, which is evenly-poised after the second day’s play at the Wanderers.

After bowling out South Africa for 229 in their first innings and conceding a 27 run lead, India hit the straps straight away in the second innings, with Mayank Agarwal hitting his first four boundaries off Rabada while KL Rahul struck his first four with an upper cut off Duanne Olivier.

Dean Elgar was forced to make bowling changes, bringing in Lungi Ngidi and Marco Jansen in tandem. Ngidi was on the mark to Mayank while Jansen took the ball away from Rahul (8) a few times before forcing him to play at an incoming delivery and found the edge.

While India took the lead with Agarwal continuing confidently, Cheteshwar Pujara was being targeted with incoming deliveries. However, soon Agarwal was trapped in front by Olivier, leaving the under pressure veterans to do the heavy lifting.

The South Africa pacers posed tough questions with short deliveries, but whenever they went full Pujara and Rahane cashed in by playing assertive drives for boundaries. Pujara even scored a couple of boundaries in the final over of the day bowled by Maharaj as the fourth wicket pair finished unbeaten having added 41 off 52.

Earlier, resuming the day at 35/1, South Africa batters Dean Elgar and Keegan Petersen made contrasting starts. Petersen began the day with a confident backfoot punch through cover for three runs off Bumrah and a four to fine leg but Elgar, at the other end wasn’t too comfortable against the Indian pacers.

It was Shardul Thakur, who gave India the first breakthrough of the day, dismissing Elgar for 28 off 120. It was pitched on a length and shaped away a bit. Elgar, who had a poke at it, got a faint nick to the wicket-keeper, thus ending a 74-run second-wicket stand that came off 211 deliveries.

Meanwhile, Petersen, who looked in solid touch brought up his maiden Test fifty with a boundary off Shami. However, he probably got carried away thereafter and fell to Thakur on 62 as he pushed at a length delivery and edged it to Mayank Agarwal at second slip.

Shardul got his third wicket of the day by removing Rassie van der Dussen (1), who looked to defend but got an inside edge through to the wicket-keeper, leaving South Africa at 102/4 at lunch.

Resuming the play post-lunch, Temba Bavuma and Kyle Verreynne put on a useful partnership to keep the Indian bowlers at bay. They hit boundaries and also rotated the strike well to bring up an important 5th wicket partnership for the hosts.

It was again Thakur, who struck to end the promising stand. Verreynne (21) was trapped on the crease to an incoming delivery from Thakur.

The batter went for the review after being given out leg-before but it was three reds, thus ending the 60-run fifth-wicket stand.

However, Bavuma (51) continued batting in the same manner and reached his 17th Test fifty with a streaky four off Thakur.

But he couldn’t carry his innings longer and got out in the very next ball as Thakur bagged his maiden Test fifer. Kagiso Rabada, who came to bat next was dismissed by Shami for naught. However, Keshav Maharaj (11 not out) and Marco Jansen (2 not out) denied India any wicket further till Tea.

Maharaj, who scored a couple of boundaries late in the second session, put on a useful stand with Marco Jansen post-tea to help South Africa into the lead. Both batters were eager to take on the bowlers but Bumrah managed to knock Maharaj over to pick up his first wicket of the innings.

However, Jansen wasn’t deterred as he took on Bumrah for a couple of boundaries and also survived a review for LBW off Shami. It was again left to Thakur to check South Africa and he responded with the wickets of Jansen and Lungi Ngidi to finish the hosts’ innings and become only the second India to bag seven in an innings in South Africa. 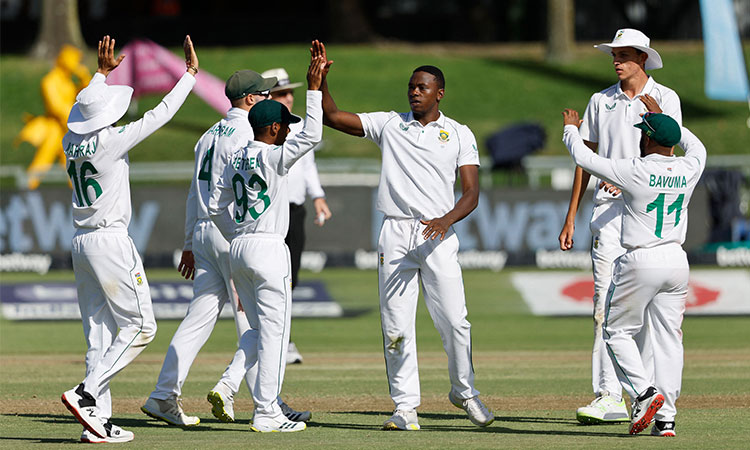