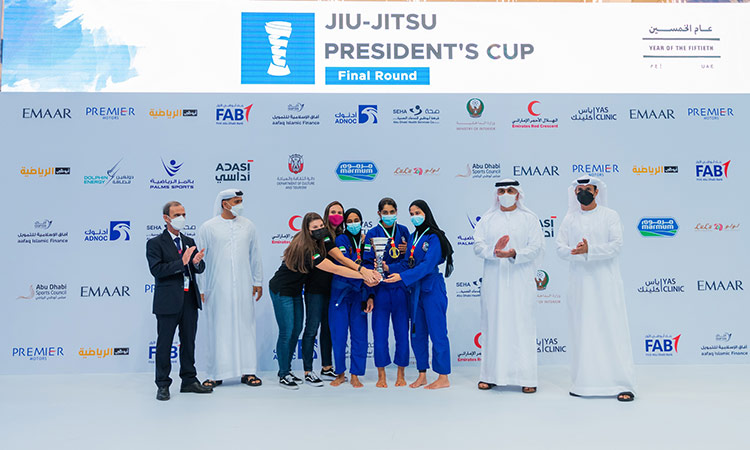 Members of the Palm Sports Academy Team 777 celebrate with the trophy as officials look on.

The Jiu-Jitsu President's Cup, one of the most prestigious championships on the UAE sporting calendar, ended in stunning style with Baniyas Club sealing the men’s title for the second straight year, and Palm Sports Academy – Team 777 making history as winners of the first-ever women’s championship, in front of a large crowd at the Jiu-Jitsu Arena in Abu Dhabi.

After a thrilling season, the five best-performing clubs and academies took to the mats for two days of intense competition in search of victory. Leading athletes from Al Ain. Al Wahda, Baniyas. Palm Sports Academy Team 777 and Sharjah Self-Defence Club, faced off in an open belt competition across Under-16s, Under-18s and Adults’ categories.

The final round of the prestigious championship demonstrated the quality and high technical ability of the UAE’s jiu-jitsu community, with Baniyas amassing the most points to take the men’s title, ahead of Al Wahda in second and Al Ain Club.

Baniyas made it a double with victory in the Under-18s competition, with Al Ain and Al Wahda second and third respectively while in the Under-16s, Sharjah Self-Defence Club won the title, with Al Ain runners-up, and Palms Sports Academy – Team 777 in third place.

In the women's division, Palms Sports Academy - Team 777 made history with victory in the first edition of the competition. Al Wahda showed its strength to finish second with Sharjah Self-Defence Club in third.

Sharjah took victory in the women’s Under-18 event, with Al Ain Club second and Palm Sports Academy – Team 777 third. In the under-16 women's category, Al Wahda won the title, Palms Sports was runner-up, and Al-Ain was third.

Abdel Monem Al Hashemi, President of the UAE and Asian Federations, and Senior Vice President of the Ju-Jitsu International Federation; Panagiotis Theodoropoulos, President of the JJIF; Aref Al Awani, General Secretary, Abu Dhabi Sports Council; Brigadier Nasser Khadem Al Kaabi, Vice Chairman of the Board of Directors of the Abu Dhabi Sports Council; Fahad Ali Al Shamsi, Secretary General of the UAE Jiu-Jitsu Federation, and Joachim Thumbart, Director-General of the JJIF, were present at the event alongside officials from participating clubs and academies.

Hashemi said: “The level of the championship has progressed upwards and the performance has risen considerably over the years. The standard this year was on par with international championships and the real winner is the Jiu-Jitsu sport in the country.

“Championships such as this are crucial to help find a distinguished group of talents capable of representing the national teams in the upcoming competitions.”

“2021 is a Year of Achievements for UAE jiu-Jitsu with our players amassing 71 medals across continental and World championships. We also organized 24 local and international championships in the UAE, the most ever, and I thank the commitment of everybody in the jiu-jitsu family.”

Theodoropoulos said: “The joy that I saw on the faces of players and coaches and their celebrations after the competition show how much they enjoy the sport of jiu-jitsu.”

Salem Nayef Al Kathiri, Executive Director of Baniyas Club, said: “The President's Cup is the most valued local title, and is one of the most prominent championships that contribute to highlighting new talents and providing the national team with stars who are able to compete globally.”

Trefa Reda, Al Wahda Academy player under 16, who made history with her team, said, "Our feeling is indescribable for winning first place in the women's category, as history will record that we achieved the first title.”