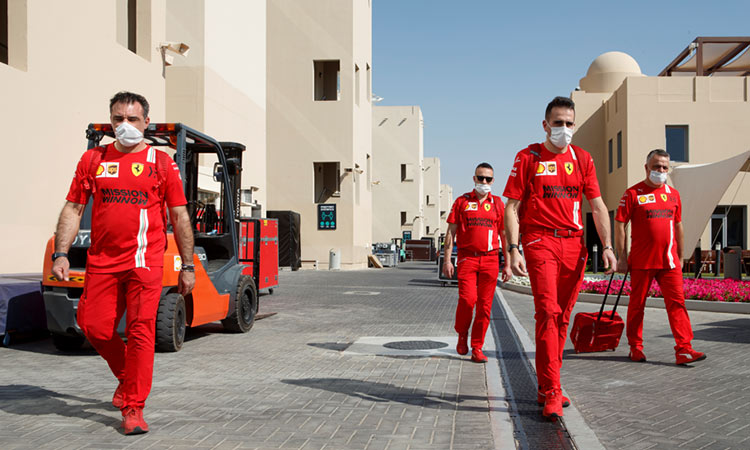 Staff from the Ferrari team inside the Yas Marina Circuit grounds ahead of the Formula One Etihad Airways Abu Dhabi Grand Prix.

The excitement is building at Yas Marina Circuit as the teams arrive on site to begin preparation for the finale of the F1 season at this year’s Abu Dhabi Grand Prix, with a title-deciding race on the cards between Red Bull Racing and championship leader, Max Verstappen, and Mercedes AMG with seven-time world champion, Lewis Hamilton.

In a tight race at the top of the driver’s and constructor’s championships, all eyes across the globe are fixed on Yas Marina Circuit to see if Verstappen will capture his first World Driver’s Championship or if Hamilton will retain his crown with Mercedes AMG for his fifth straight year in what will be a historic race on the new reconfigured Yas Marina Circuit track on December 12.

Meanwhile, Yas Marina Circuit has officially sold out ahead of the Formula 1 Etihad Airways Abu Dhabi Grand Prix, as the venue gears up for the Middle East’s biggest entertainment weekend set to kick off on Thursday.

With heightened demand for tickets this year as fans return to the venue for the 13th edition of the Abu Dhabi Grand Prix, organisers have revealed that tickets were swiftly snapped up by F1 fans from across the UAE and around the world as the UAE’s capital city begins to buzz with excitement for the regional milestone event.

As well as the once-in-a-generation F1 season finale, this year also sees the return of the iconic Yasalm After-Race Concerts, bringing the best live music to the UAE capital, with spectacular live performances by some of the world’s biggest music stars on Yas Island.

This year will see US rapper Khalid take to the stage on Thursday, with British icon Stormzy headlining on Friday night. Scottish sensation Lewis Capaldi will perform on Saturday, with Rock and Roll Hall of Fame group Foo Fighters closing out the weekend in style on Sunday evening.