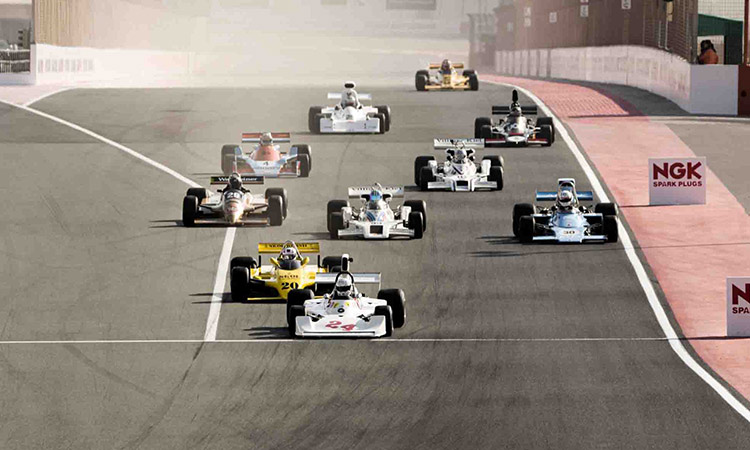 Participants in action during the race at the Dubai Autodrome.

It was a 'Back to the Future' weekend at Dubai Autodrome as a crowd estimated at 5,000 spectators descended on the venue in Motorcity for an injection of Formula 1 and Sportscar nostalgia.

Apart from the myriad of activities during the build-up and on race day, the event paid homage to Dubai's first F1 demo race back in 1981 as well as the UAE's 50th anniversary, giving the venue a truly festive atmosphere.

Webb was clearly fired up for the occasion as he relished racing the classic #24 car - maintained by GPX — which Hunt drove to his first F1 victory at the 1975 Dutch Grand Prix.

Around the Dubai Autodrome, powered by the Ford Cosworth V8, Webb was untouchable, claiming pole with a best lap of 1:55.648 around the 5.4km Grand Prix layout of the Autodrome. Dubai based Jordan Grogor driving the extremely rare Amon AF101, campaigned by racing legend Chris Amon in 1974, was second fastest, ahead of ex-F1 driver Jean-Denis Deletraz in an Arrows. Also on the grid were the likes of Le Mans winner Romain Dumas in the bright yellow Fittipaldi, driven by the great Emerson Fittipaldi in the seventies as well as Former F2 champion Andy Soucek who was on duty in the Surtees TS9b, also of that era.

In the race Webb put down the hammer, showing no mercy and making Hunt-Hesketh proud, winning by over 18 seconds with the fastest lap to boot. Dumas chased hard early on until the car suffered a failure which forced him to DNF as smoke billowed from the rear of the Fittipaldi.

Grogor finished second getting the better of Delatraz, who settled for third ahead of the Shadow duo Jamie Constable and Valentin Simonet, fourth and fifth respectively.

Webb took his sparkling form onto race two which he also won but not as comfortably, with Grogor second, five seconds adrift and Constable grabbing a well-deserved podium. Deletraz crossed the line fourth, with Simonet rounding out the top five.

The demise of Dumas was a disappointment as the Le Mans winner in the Arrows was a pre-race favourite and expected to give Webb a good run for top honours. While Soucek also suffered from technical issues on the Surtees. Apart from the historic F1 cars in action, also on the bill were two races for Group C sportscars, with several drivers doing both disciplines on the day.

Marc Devis and Danny O'Connell shared a Spice SE90P to take victory in Race 1 by a good margin over Soucek and Webb who shared the cockpit of the Argo JM19D to finish second ahead of Mathieu Baumel and Cyril Despres also in an Argo.

It was pretty much the same in race two with Devis and O'Connell making it a double win over Soucek and Webb. Third went to Bernhard van Oranje-Nassau in a Spice. Emirati racer Saeed Al Mheiri also competed in the Argo JM16, joined by Axel Jeffries, who had to withdraw due to a gearbox malfunction

At the end of the day, it would be fair to say that the biggest accolade from the first historic Dubai Grand Prix belonged to Webb, he said afterwards: "It was just such an honour to drive such amazing cars, James Hunt's car and the sports cars I drove this weekend is very special. This was a great event which I hope only gets bigger and bigger."

At the end of a successful weekend of racing and entertainment, where the sport's past met the future, Faisal Al Sahlawi, Dubai Autodrome General Manager commented: "It was great to see the history of motorsport on display and on track at Dubai Autodrome for our first historic Grand Prix.” 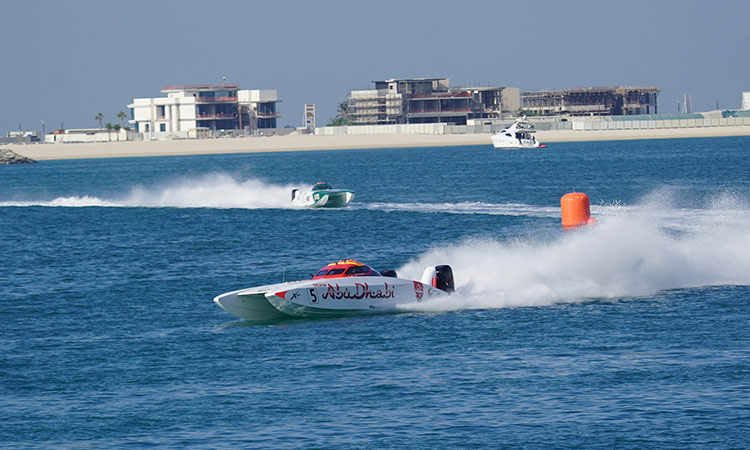 The 2021 UIM XCAT World Championship is within touching distance for Dubai Police after they overcame Team Abu Dhabi’s bold challenge for victory in race one of the Dubai Grand Prix on Friday.