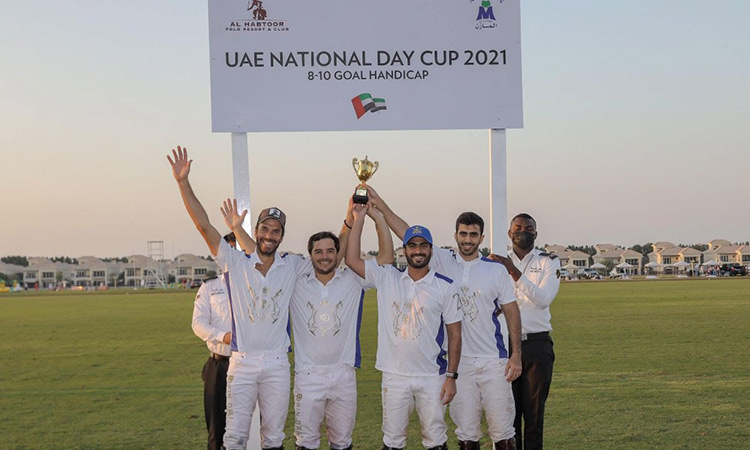 Members of the Bin Drai Polo team pose with the trophy.

Dubai Wolves faced Ankora / Bangash Polo at the subsidiary final of the tournament. Both teams were neck and neck from the start until the penultimate chukker. Ankora/Bangash tried to catch up with the Wolves and with forty-five seconds left on the clock, Frederico Potobsky narrowed the gap in scores. However, the half goal advantage of Dubai Wolves was enough to secure the win at 6.5 to 6 goals.

The final match was between Hesketh and Bin Drai Polo teams. Tomy Iriarte from Hesketh Polo took the initial lead by the end of the first chukker and quickly followed it with another goal early on the second. With Bin Drai Polo on their tail, the team managed to even out the scores by halftime with 2 goals scored by Adrian Laplacette.

The Bin Drai team carved a 1-goal lead by the end of the third chukker and continued its winning streak as Khalid Bin Drai and Cristobal Sanchez Duggan sealed the win at 7 goals to 4.

Mohammed Bin Drai was adjudged as the Most Valuable Player and Garapata, ridden by Tomy Iriarte as the Best Playing Pony of the tournament.