India in command after Patel's five-for against New Zealand - GulfToday 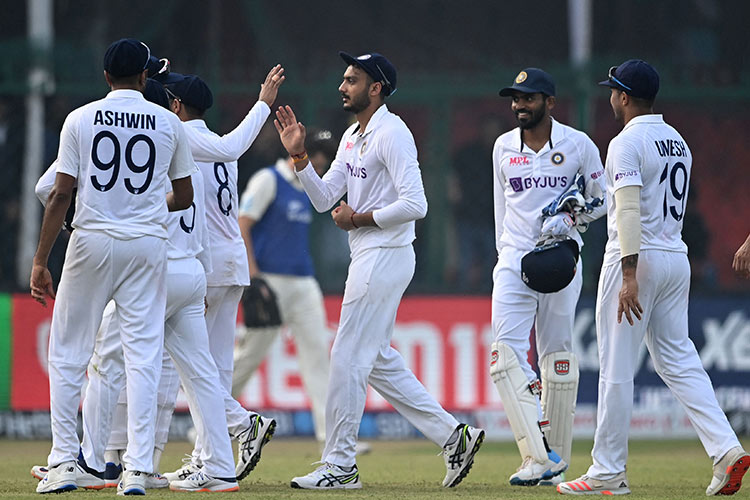 India's Axar Patel (centre) walks back to the pavilion along with his teammates during their first Test against New Zealand at the Green Park Stadium in Kanpur on Saturday. AFP

At the close India were 14-1, leading the Black Caps by 63 runs in their second innings with opener Shubman Gill bowled by Kyle Jamieson for one before bad light stopped play after five overs.

Mayank Agarwal on four and Cheteshwar Pujara on nine will start the innings Sunday as the hosts look to put the first of two Tests out of reach on an increasingly tricky wicket.

Earlier Patel and the other Indian spinners -- Ravichandran Ashwin and Ravindra Jadeja -- clawed India back in the last two sessions on Saturday after a strong New Zealand start.

The visitors were 249-6 at tea and the three spinners finished the Kiwi innings within 47 runs after the break.

Patel said he had been using the crease well on the pitch which is "slowing up even further".

"Today (it) was even slower than the first two days, though it was turning more. It is difficult, but you can survive here with caution," he said after play.

Ashwin took the last two wickets of the innings to finish his 42.3-over spell giving away 82 runs for three scalps.

Jamieson was caught off Ashwin for 23 and William Somerville was clean bowled by the offspinner to end the Black Caps' innings.

Ashwin and Patel denied centuries to the Kiwi openers -- Tom Latham and Will Young -- who closed the day on Friday at 129 for zero.

Latham was stumped by substitute wicketkeeper K.S. Bharat off Patel's bowling for a grinding 95 off 282 balls.

Young, who shared a 151-run opening stand with Latham, fell 11 short of his maiden international century after edging Ashwin to Bharat.

The 29-year-old told journalists after play that batsmen have to use the conditions to "take calculated risks to keep the scoreboard ticking over".

"I think each one has their own method of how they're going to combat the conditions and also the Indian bowlers who are highly skilled in these conditions," Young said.

India's spinners, especially Patel and Ashwin, then looked more potent on the third-day wicket with the second new ball, bowling tight lines and offering little to the batters.

Ross Taylor survived a missed stumping by K.S. Bharat off Axar before edging the same bowler to the substitute wicketkeeper a few overs later, departing for 11.

Henry Nicholls was given leg-before to Patel for two and Latham fell for 95. Jadeja bowled debutant Rachin Ravindra for 13. 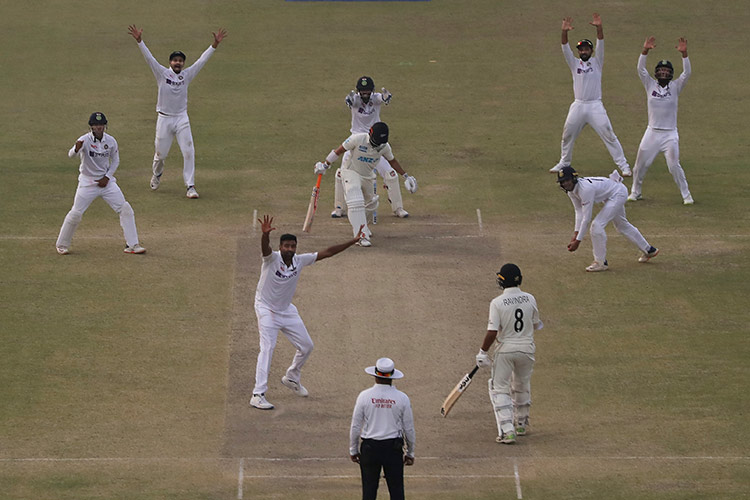 Debutant Rachin Ravindra worked with New Zealand's lower order to pull off a dramatic draw against India after they ended day five on 165-9 while chasing 284 in the first Test on Monday.