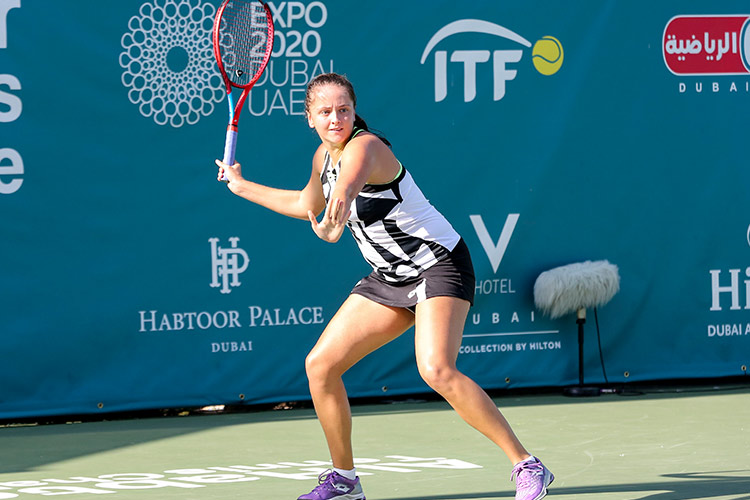 Viktoria Kuzmova competes against Viktoriya Tomova during their 24th Al Habtoor Tennis Challenge at the Habtoor Grand Resort and Spa on Wednesday.

Zheng battled for more than two hours for a 6-7 (5), 6-1, 6-4 win to ensure only one of the top eight seeded players remained in the quarter-finals after Bulgarian Shinikova, who turned 30 last month, took exactly 90 minutes to pack off Japanese Mayo Hibi 6-4, 6-3.

Earlier in the day, 2019 runner-up Snigur had shown little mercy in her 6-0, 6-1 demolition in just 43 minutes of Austrian qualifier, Julia Grabher.

“I was a little better today than yesterday. The idea was to stay switched on all the time and not make silly mistakes,” Diatchenko said later.

Three surgeries on her right knee set her back by nearly a year and a half, and Diatchenko is quite keen to ensure she can slowly build up the momentum heading towards 2022.

“Making a comeback is never easy, but it gives me great joy to see where I am heading during this preparatory period for the next season,” she admitted.

Standing in her way in Thursday’s quarter-finals will be fourth seed Kristina Kucova, who got past Belarussian Yuliya Hatouka 6-4, 6-1 in an earlier match. “The goal is just to stay focused at all times and play well,” Diatchenko related.

Kuzmova, who next runs into 19-year-old Snigur, was pleased to be finding her rhythm heading into the last eight stages. “It feels amazing to stay here one more day, especially after two tough rounds. There is no doubt that things are going to get tougher here on, and I am prepared for anything that may stand in my way,” Kuzmova said.

“I know I can get better with time. The rhythm is back and for sure it will be a tough one tomorrow against Daria,” she added.

Later in the evening, Zheng had a nervy start as she trailed the top seed 0-3. But she came right back and then lost out in the tie-breaker. However, she regrouped well and breezed through the second before staying in attack mode in the deciding third.

“This is definitely one of the big wins for me. It is also one step forward in the right direction. I don’t care who is across the net. All I know is that I have to play hard and do everything to win,” Zheng related.

The quarter-finals will get under way at 10.30 am at the Habtoor Grand Resort and Spa tennis courts, on Thursday.