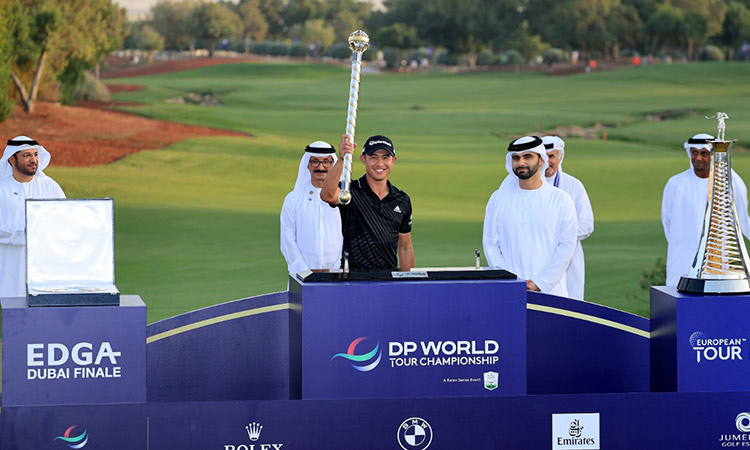 Collin Morikawa poses with the trophy after winning the final round of the DP World Tour Championship.

Collin Morikawa produced a bogey-free final round to win the DP World Tour Championship, Dubai by three shots on a day in which he also made history by becoming the first American to clinch the Race to Dubai crown.

In the European Tour’s season-ending Rolex Series event at Jumeirah Golf Estates, Morikawa, who started the day three-shots behind overnight leader Rory McIlroy, saved his best to the last, putting on a solid performance on the Earth Course.

The 24-year-old carded six birdies, five of them coming in the last seven en-route to shooting a six-under 66.

He ended the tournament on 17-under par, ahead of runners-up Matt Fitzpatrick, who made a late charge with six-under for the day and Sweden’s Alexander Bjork.

McIlroy, who was bidding to win his third DP World Tour Championship title, saw his chances dented after a frustrating end with three bogeys in his last four holes. The Northern Irishman finished with a 74 and tied sixth with Ian Poulter and Dean Burmester.

By being crowned Europe’s Number One, Morikawa is also awarded a bonus of $1 million, alongside his DP World Tour Championship winnings.

Speaking after receiving the Harry Vardon Trophy and the DP World Tour Championship, Dubai trophy, Morikawa said: “It’s a special win. I told everyone that I wanted to win the Race to Dubai and the DP World Tour Championship. I had it in my control this week. If I had won, I would have sealed the deal and that is what I focused on really. I couldn’t get my head too focused on the Race to Dubai as I knew there were many scenarios that could have happened but I wanted to come out and win.

“I felt my game was in a really good spot over the past a month and a half since the Ryder Cup so overall it’s an amazing win and really special.”

Speaking on his key moments in the final round, Morikawa explained: “To be honest, I really don’t know. Starting off on six pars especially with some birdie holes, wasn't fun. I felt I was hitting some good shots and I wasn’t getting the breaks I needed or the putts weren’t dropping. I told myself when I looked at the leaderboard after nine that I’m still in this. I just needed one spark and after parring 10 and 11, I knew something had to change. On the 12th, I got a great break and that is when the momentum started.”

The victory by Morikawa concluded an exciting four days of action in a tournament that had a wide array of off-course entertainment and was attended by more than 65,000 spectators.