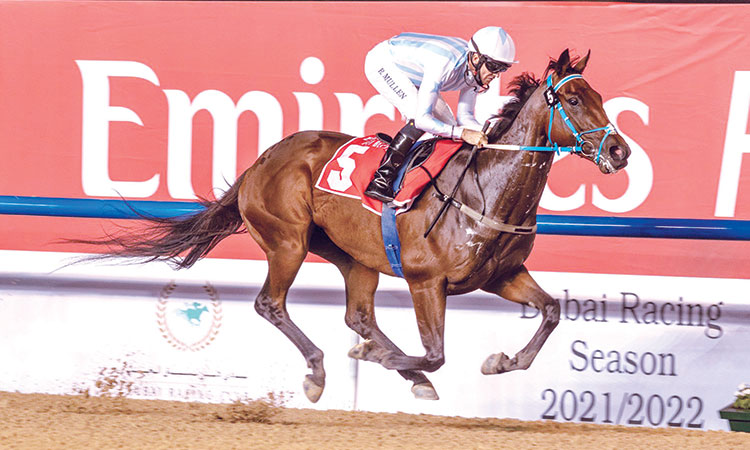 Racing at Meydan returned on Thursday evening with a seven race card officially highlighted by the Graduate Stakes sponsored by Emirates Airlines, won by Scots Pine, ridden by Richard Mullen.

It attracted a field of just five and Mullen, riding in the colours of Sayed Hashish & Hana Refai, went straight to the front, stalked by Melicertes. When that rival weakened about 275m out the result was never in doubt.

A 4yo gelded son of Shamardal, he was losing his maiden tag at the sixth attempt, fourth locally and on his first appearance for trainer Beverley Deutrom.

Part-owner Hashish said: “Hopefully he is going to turn out a bargain and we thought dirt would suit him though he has good turf form.

“He had sore shins last season so he had excuses and it is great to get a winner early on.”

The meeting licked off with a 1400m maiden for 3yos, the Arabian Adventures and it went to Atlantic Sky, produced to lead close home by Antonio Fresu, sporting the silks of Saeed Sultan Al Rahoomi for Musabbeh Al Mheiri.

A Shamardal gelding, he raced just once last season, over 1600m on the Meydan dirt when trained by Doug Watson. Slowly away on that occasion, he repeated the trick here and was ridden patiently by Fresu who sent him after the leaders about 300m out.

That was the point Al Maroom, the only filly in the race, hit the front but Fresu’s mount collared her in the final 50m. His dam, Local Time, won both the UAE 1000 Guineas and Oaks in 2015 for Godolphin and Saeed bin Suroor.

Fresu and Al Mheiri immediately doubled up in the following Emirates Holidays, a 2000m maiden, with Just You Wait opening his account at the sixth attempt, pulling well clear in the final 200m to win easily for Nasir Askar.

A 5yo Dubawi gelding, he has clearly had his problems but, having tracked Here D’Oro he was never in any danger after grabbing the initiative with about 350m remaining.

The only handicap on the card, the emirates.com over 1600m, also went to Al Mheiri but Fresu had to settle for second this time aboard the trainer’s Alkaamel who was denied by Bernardo Pinheiro who created something of a shock on Gentle Bellini.

Owned by Fathi Esaed Mohd Egziama, the 5yo Dubawi entire was a long way back throughout the first half of the race but, once pulled wide in the straight, picked up well to land the spoils and register a second career success. His first was for Aidan O’Brien in Ireland and this was just his third UAE outing.

Pinheiro said: “I knew my horse was fit and would be staying on as he is probably better over further. It was a good performance.”

Doug Watson dominated a rated conditions race for 3 and 4yos over 1200m, the Emirates Skycargo, saddling the 1-2 with Sam Hitchcott delivering Uncle Hamed to deny stable companion Mcmanaman in the dying strides. The victory had looked unlikely with 400m to run when Hitchcott’s mount had just one of his five rivals behind him.

Owned by Abdulmohsen Al Abdulkareen, the 3yo Tapiture gelding was doubling his career tally, on his sixth outing, having shed his maiden tag on his final start of last season, over the stiff 1400m at Jebel Ali.

Watson said: “Uncle Hamed has really matured and filled out and this looked a logical first race for him although the 1200m was sharp enough.

“Mcmanaman will probably also be better over further and was a bit keen early on which probably cost him close home but I am delighted both ran so well.”

Denied aboard Mcmananan, Pat Dobbs tasted victory in the following 2000m rated conditions stakes, the Emirates Airline, with the hard fought success of Watson’s Al Qaqaa, at the time denying Al Mheiri and Fresu a treble with Dalaalaat.