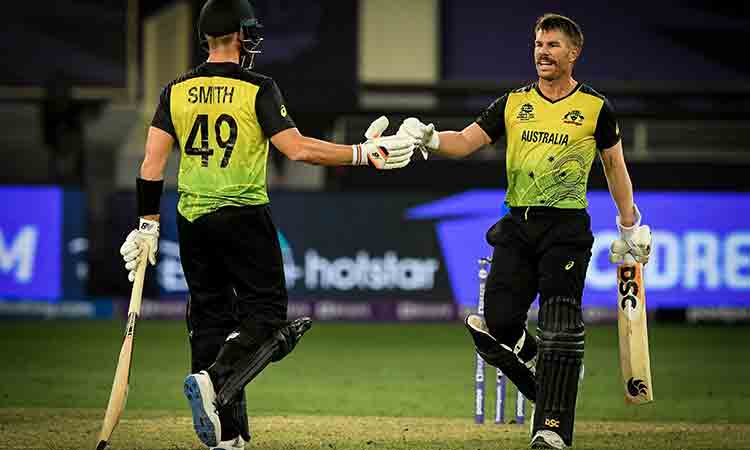 Adam Zampa took 2-12 before David Warner heralded his return to the form with a 42-ball 65 to guide Australia to seven-wicket victory against Sri Lanka in their T20 World Cup match in Dubai on Thursday.

After restricting Lanka to 154/6, Australia achieved the target for the loss of three wickets with 18 balls remaining. With the victory, Australia moved to the second spot in their group with four points from two matches. Warner and Aaron Finch shared a blistering partnership and gave Australia a blazing start.

The opening duo added a quick-fire 70 runs for the first wicket to set the tone for a successful chase. Many eyebrows were raised on the selection of Warner for the World Cup.

He came into the tournament on the back of a dismal performance in the recently-concluded Indian Premier League (IPL). He was dropped from the Sunrisers Hyderabad squad after failing to deliver in two consecutive matches. 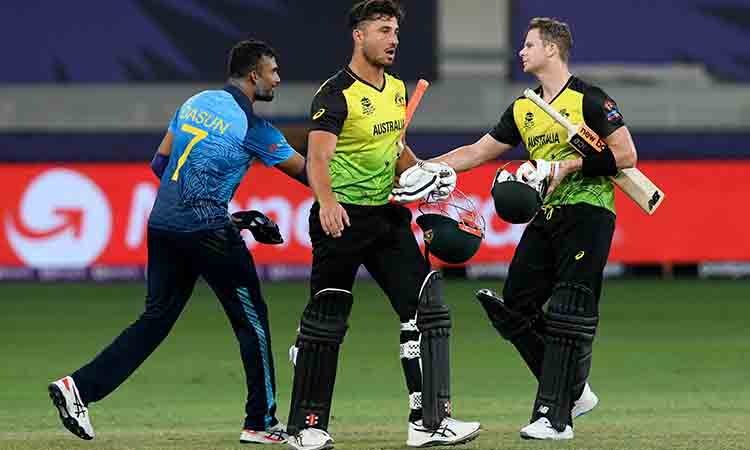 Steven Smith shakes hand with Dasun Shanaka after their win in Dubai. AFP

But Warner proved the mettle the champions are made of with a sparkling innings that lighted up the Dubai Stadium. He smashed 10 boundaries during his stint at the crease. Finch, who was out for a duck in the last game, also flexed his muscles and collected 37 runs with the help of five hits to the fence and two over it in his 23-ball knock.

Lanka did try to make some in-roads through their bowling but they could not foil a determined Australia’s bid to notch up second straight victory.

De Silva uprooted the stumps of Finch and had Glenn Maxwell caught by Fernando with in a space of 10 runs to reignite the Lanka’s hopes of staging a stellar comeback for a come-from-behind victory before Warner and Smith added 50 runs for the fourth wicket to put the doubts to rest.

Shanaka also got rid of Warner but it was too late as the damage was done. Smith and Marcus Stoinis added an unbeaten 25 for the fourth wicket to take them over the line.

Earlier, Sri Lanka failed to get the start that they wanted against Australia as they lost the first wicket with just 15 runs on the board.

Pat Cummins gave Australia first breakthrough by getting Pathum Nissanka caught by Warner. But the pair of Charith Asalanka and Kusal Perera knuckled down to stitch the innings together. They added 63 runs for the second wicket in just 6.1 overs to take the score to 78. 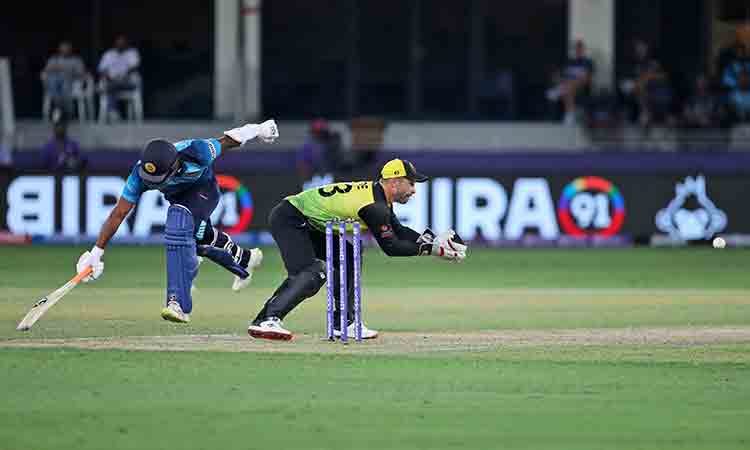 They plundered the runs, hitting the Australian bowlers to all corners of the ground. Both the players hit four boundaries and one six each during their stint at the crease.

When the duo was playing, Lanka looked set to go past 170-run mark.  But Lanka lost the momentum with three dismissals in quick successions. Zampa broke the dangerous-looking partnership with a crafty spin bowling.

He changed the length of a flighted delivery as Asalanka failed to get the pitch of the ball and swept it straight into the hands of a lurking Steven Smith at the square leg.

After the dismissal of Asalanka, Starc rattled the stumps of Perera before Zampa struck again to reduce Lanka to 94-4 from 78-1 by getting rid of Avishka Fernando. He holed out to Smith as Zampa picked his second scalp of the match after warming the match for two matches.

After that Lanka kept on losing the wickets at regular intervals and failed to get the partnership going. No Sri Lankan batsman other than Bhanuka Rajapaksa put up any resistance against a charged up Australian attack.

Every time Sri Lanka’s batsmen tried to build a partnership they were pegged back by the Australian bowlers with a wicket or two. Wanindu Hasaranga de Silva also fell cheaply and was taken by wicket-keeper Wade behind the wickets off Satrc.

Rajapaksa is in stellar form as he came to the rescue of the Islanders in their first match against Bangladesh, hitting a 31-ball 53 to steer them to a victory in their opening game.

However, he could not get the support from the others as wicket kept on falling on the other end. He added 40 runs for the fifth wicket with Shanaka to propel the score to 134/6 before the latter became the victim of Cummins.

Shanaka played painstakingly slow as he scored 12 runs off 19 deliveries at a snail’s pace as Lanka could muster 154/6 in their allotted 20 overs.