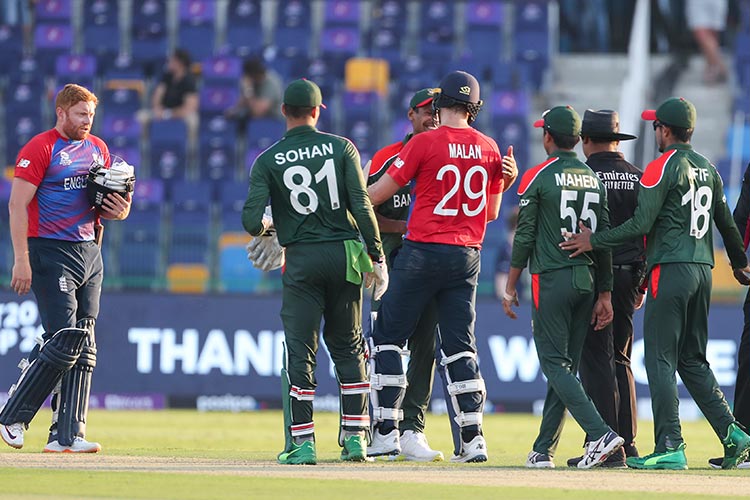 England's Jonny Bairstow (left) and Dawid Malan are congratulated by Bangladesh players after match in Abu Dhabi on Wednesday. AP

Opening batsman Jason Roy smashed 61 off 38 balls as England romped to their victory target of 125 in 14.1 overs in the Super 12 clash in Abu Dhabi.

Roy reached his seventh T20 half-century with a straight six in his 50th match and put on a key partnership of 73 with Dawid Malan, who made an unbeaten 28.

Bangladesh, who were beaten in their opening Super 12 match by Sri Lanka, lost regular wickets after electing to bat first in Abu Dhabi.

After giving away 10 runs in the opening over of the innings, Moeen hit back to be on a hat-trick in his second over, only to be denied by Mushfiqur Rahim, who top-scored with 29.

Moeen, an off-spinner, had Liton Das caught at deep square leg for nine and then sent back Mohammad Naim trudging back to the pavilion for five.

Mushfiqur and skipper Mahmudullah Riyad, who made 19, tried to repair the damage in a 37-run partnership before Livingstone broke through.

Livingstone trapped Mushfiqur lbw, but England had to use the umpire referral to have the decision in their favour after the onfield official ruled it not out.

Bangladesh kept faltering as a run-out cost Afif Hossain his wicket for five and Mahmudullah departed, for 19, soon after with Livingstone getting his second wicket.

Number nine Nasum Ahmed hit an unbeaten 19 off nine balls to give the Bangladesh total some respect as he smashed Rashid for two sixes and a four in the 19th over.

But the effort remained well below par with the England batsmen having little trouble in their batting reply despite Jos Buttler’s wicket for 18.

Roy smashed five fours and three sixes in his attacking knock that took the steam out of the Bangladesh bowling.

Malan, playing in his first T20 World Cup match, got useful batting time after the left-hander did not get a chance to bat in the first match. Jonny Bairstow hit the winning boundary in his unbeaten eight. 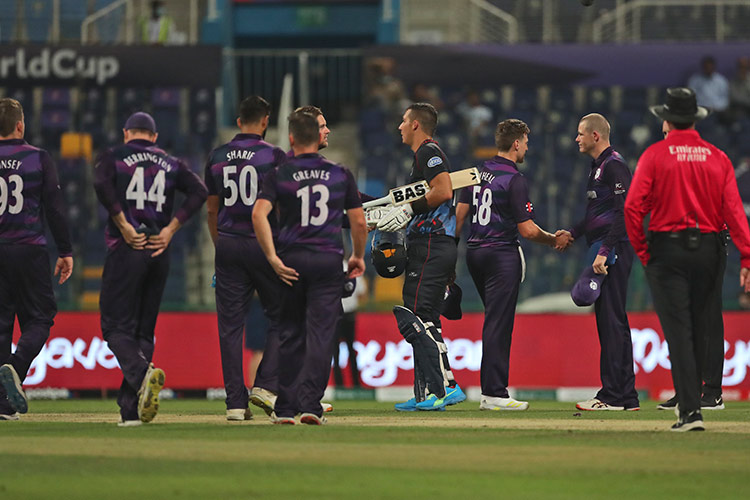 Meanwhile, Ruben Trumpelmann led a lethal bowling show to set up Namibia’s stunning four-wicket win over Scotland in their first ever Super 12 clash of the Twenty20 World Cup on Wednesday.

Chasing a tricky 110, JJ Smit made an unbeaten 32 to drive the team home with five balls to spare in Abu Dhabi and extend Namibia’s win streak to three in the tournament after the team came through the qualifying round.

Smit and David Wiese, who made 16, put on a key partnership of 35 in the low-scoring match to hand Scotland their second loss of the group stage.

Trumpelmann began the show with three wickets in the first over to return figures of 3-17 with his left-arm pace and restrict Scotland to 109-8.

The left-arm quick justified his team’s decision to bat first as he struck with the first ball and then got two in successive deliveries including Richie Berrington for nought.

Berrington, who was standing in as captain with regular skipper Kyle Coetzer out nursing a finger injury, reviewed the call but replays suggested the ball would have hit the leg stump.

The opening over provided a superb start for a team, ranked a lowly 19, that stormed into the Super 12s after wins over Netherlands and Ireland in the qualifying stage.

Trumpelmann returned his T20 best figures in his sixth international in the shortest format.

David Wiese trapped Craig Wallace lbw for four to rattle Scotland, who lost their Super 12 opener to Afghanistan by 130 runs. At one stage Wednesday, the Scots were 18-4.
Agencies 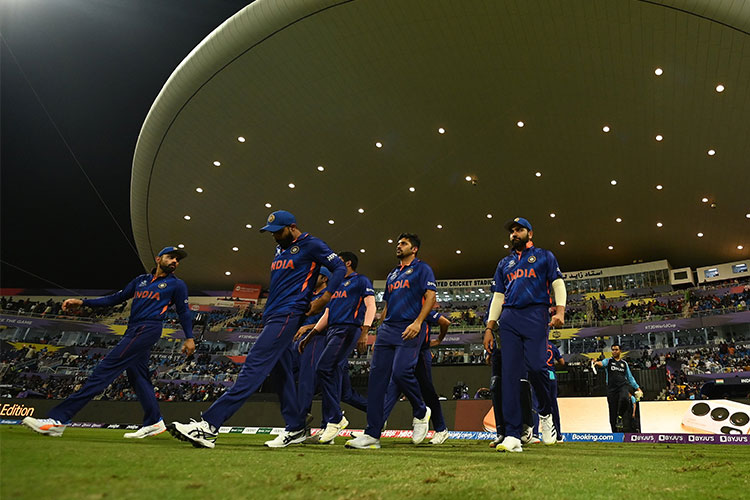 India, who seem to have reignited their campaign with Afghanistan romp, will look to replicate their performance against Scotland to keep their semis hopes alive in the T20 World Cup. 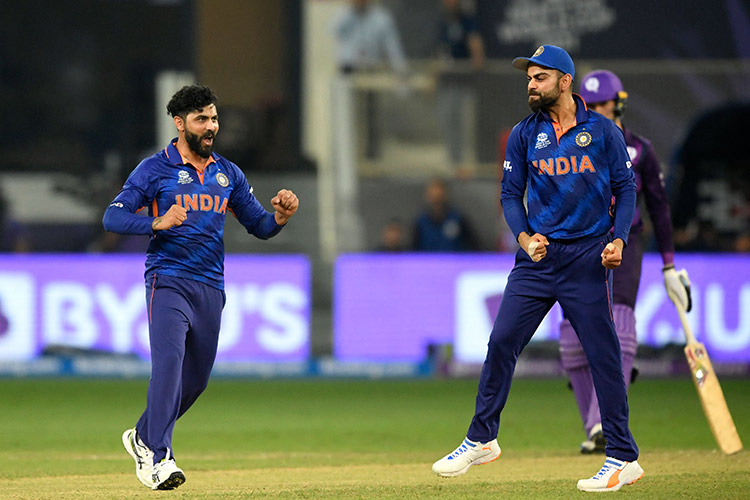 An out-going India will look to sign off on a positive note against perennial makeweights Namibia in a damp squib of the T20 World Cup on Monday. New Zealand ended Afghanistan’s campaign and India’s hopes at the showpiece event with a thumping eight-wicket victory on Sunday. 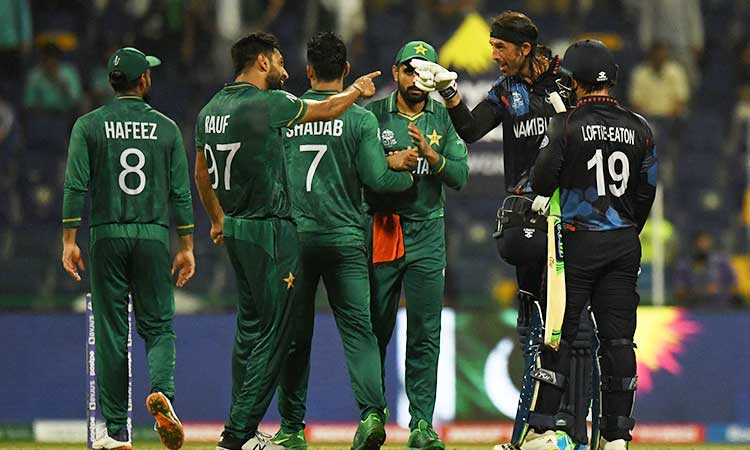 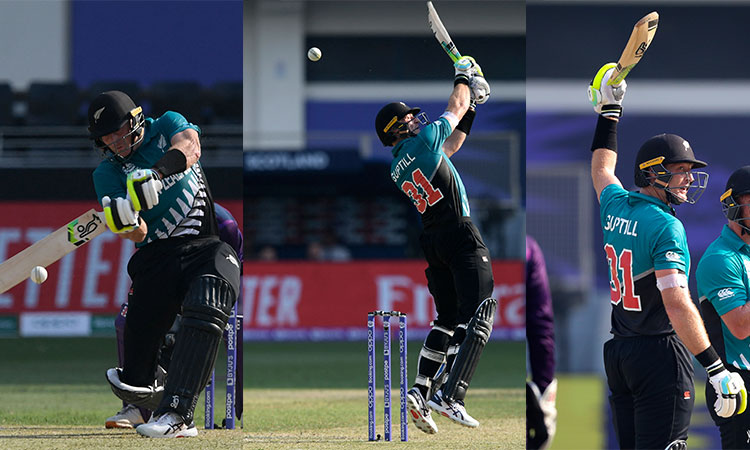 
Riding on a blitzkrieg half-century by Martin Guptill, New Zealand defeated Scotland by 16 runs in their T20 World Cup match to boost their semi-final hopes in Dubai on Wednesday.