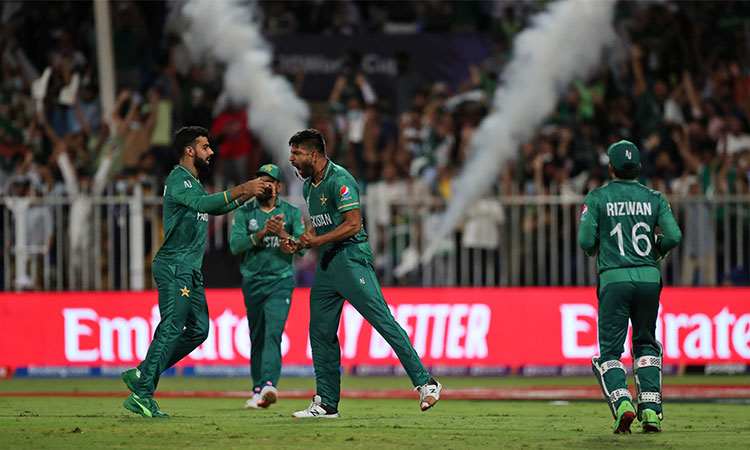 Haris Rauf celebrates the dismissal of Martin Guptill during the T20 match in Sharjah on Tuesday. AP

In reply to New Zealand’s 134/8, Pakistan made a heavy weather of the modest target and kept on losing the wickets at regular intervals.

They did not look like a pale shadow of the team which mauled India by 10 wickets in the last match before Asif took charge in hands and steered them to safety with eight balls to spare. 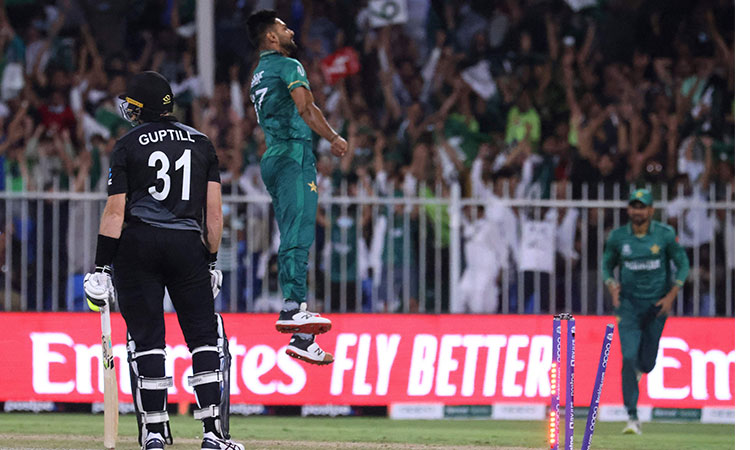 Martin Guptill (L) reacts after being bowled out by Haris Rauf (C) at the Sharjah Cricket Stadium. AFP

After the opening pair of Babar Azam and Mohammad Rizwan put up a 28-run stand for the first wicket, Pakistan failed to get the partnership going.

Ish Sodhi trapped Fakahr Zaman to make it 47/2. Every time Pakistan made some stride, New Zealand pegged them back with a wicket or two.

Conway took a stunner to get rid of experienced Mohammad Hafeez and Sodhi again struck to catch Rizwan plumb before Trent Boult trapped Imad Wasim to reduce Pakistan to 87/5 in 15 overs. A chaseable total started looking like a mammoth target and Pakistan needed someone to pull them out of rut. Young Asif decided to the bull by its horn and took 13 runs off Southee in the 17th over with the help pf two sixes to tilt the game in Pakistan’s favour. 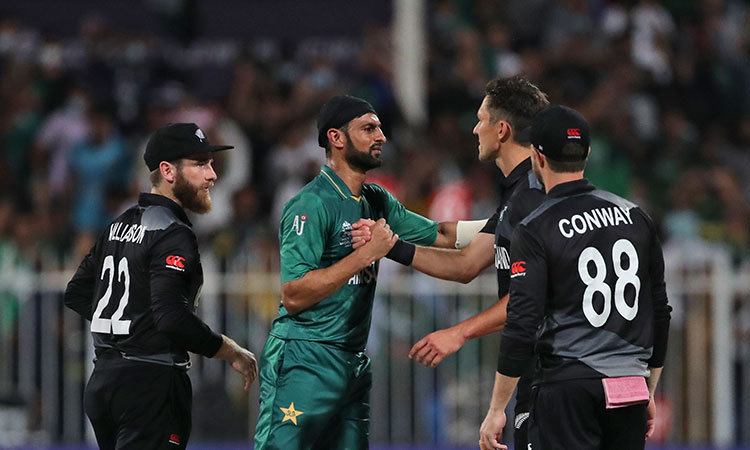 Veteran Shoaib Malik also flexed his muscles and plundered 17 runs off Santner’s over to all but end the New Zealand’s hopes of a come-from-behind victory as they notched up their second win from as many games to go on the top their group with four points.

Earlier, after getting off to decent start, New Zealand lost a couple of wickets in quick succession, which pushed them on the back foot briefly.

Openers Martin Guptill and Daryl Mitchell added 36 runs for the first wicket in the powerplay to set the tone for a fighting total. Rauf rattled the stumps of Guptill to break the dangerous-looking partnership. After that, New Zealand kept on losing the wickets at regular intervals and failed to capitalize on the good start. 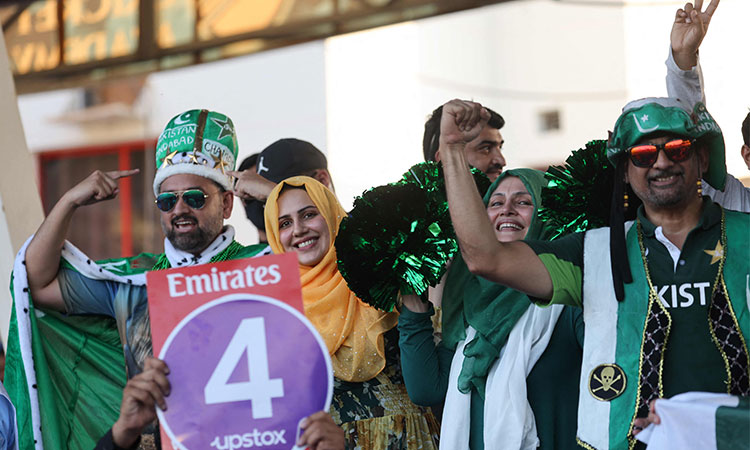 Supporters of Pakistan cheer before the start of the T20 match at the Sharjah Cricket Stadium. AFP

Imad Wasim and Mohammad Hafeez struck in quick successions to get rid of Mitchell and James Neesham as New Zealand were reduced to 56-3. Bothe Mitchell and Neesham were caught by Zaman off Wasim and Hafeez respectively.

Devon Conway along with the captain Kane Williamson added 34 runs for the fourth wicket to take the score to 90/3. New Zealand looked set to go past 150 but a lethargic Williamson fell prey to a direct throw by an agile Hasan Ali. The New Zealand captain was found short of his crease while scrambling for a run that probably never existed.

Williamson looked still reeling under the trauma of his poor campaign with Sunrsiers Hyderabad in the recently-concluded IPL. He played a painstakingly slow knock of 26-ball 25 which left too much to be done by the batsmen to follow.

Conway failed to go a long and became the third victim of Rauf. He was caught at the boundary line by Babar, while trying to accelerate the scoring rate. Glenn Phillips holed out to Ali to give Rauf his third scalp of the day before the pacer uprooted the stumps of Mitchell Santner to complete his four-wicket haul.

Shaheen Shah Afridi, the architect of India rout, failed to create the same magic but bagged the wicket of Tim Seifert to open his account in the match.