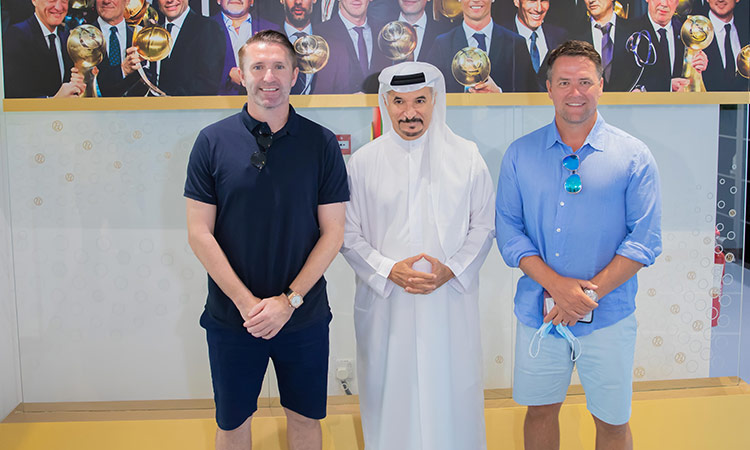 Winner of the Ballon d'Or in 2001 and named by Pele in the FIFA 100 list of the world's greatest living players, Owen has become a racehorse breeder and owner since retiring from football in 2013, and his top-class Brown Panther, winner of the Royal Ascot in 2011, won the Dubai Gold Cup here in 2015 at the Meydan.

Brown Panther, who was put down later that year due to a shattered hind leg, overcame his wide draw and kicked away to an impressive victory in the $1 million Dubai Gold Cup, one of the undercards on the 2015 Dubai World Cup night.

Owen remembers that night vividly, and is hoping to return to Meydan and win horseracing’s most coveted prizes, the Dubai World Cup.

Hareb gave them a tour of the Council’s headquarters and presented them with a copy of “My Story” - the anecdotal memoir of His Highness Sheikh Mohammed Bin Rashid Al Maktoum, Vice President and Prime Minister of UAE and Ruler of Dubai.

“I would like to thank the Dubai Sports Council for their warm welcome and hospitality,” said Owen. “Dubai is a place that I visit regularly, maybe twice a year on holiday and mix it up with business, meet some people out there.

“Since the time me and Robbie have been coming here, more and more special events have been taking place here in Dubai. Sports in Dubai is amazing. There are so many big events taking place here. Obviously the ICC T20 Cricket World Cup [is taking place here] at the moment. Also, I am a keen follower of golf and Dubai is one of the leaders in that sport for many, many years. So it is an ever-expanding city and I like to come and visit. It’s so big on sports and events.”

Already planning his next trip to Dubai, Owen added: “Expo 2020 Dubai, of course, is a huge event and I am sure it is going to be a huge success. I will probably visit the Expo, later in maybe three or four months. Will bring my family and have a walk there.”

Thanking Dubai Sports Council and complimenting it for the “beautiful place” they call their headquarters, Keane said: “We have been coming to Dubai for 20 years, our families have been here and our kids have been here.

“I have to say, everyone is very, very welcome [in Dubai] and that is why we come back here every year. You guys keep surprising with all the new things, buildings and different stuff that you are making. It’s great. We are enjoying this trip and look forward to coming back many, many times.”

Keane, who is Republic of Ireland’s most capped player (146 appearances) and all-time record goal-scorer (68 goals), is also enjoying watching Liverpool and its Egyptian star Mohamed Salah in action.

“Liverpool have got a top, top manager and certainly top players,” Keane said. “The way they play their football at the moment is very, very exciting. Very good to watch. And for me, Mo Salah, you have to say, at this moment of time he is the best player in the world.

“The way he is playing, I think this season he has gone to another level again and some of the goals he has scored, if anybody else scored them – if Messi or Ronaldo scored the kind of goals that he has scored, we would be speaking about it for a long time.

“He has been a revelation this year and he continues to get better and better. I don’t think anybody can argue that he is probably the best player in the world at this moment of time.”