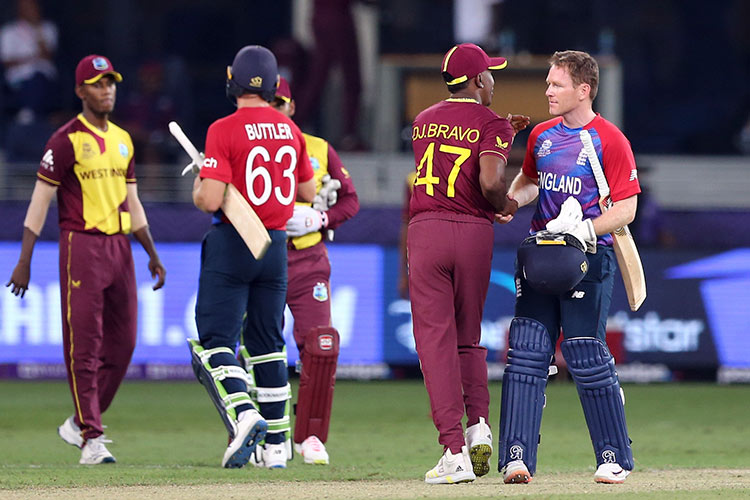 Adil Rashid and Moeen Ali shared six wickets between them to wreak a havoc as the duo helped England set up a facile six- wicket victory against a hapless West Indies in Dubai on Saturday.

After restricting West Indies to a paltry total of 55, England chased down the target for the loss of just four wickets in 8.2 overs. West Indies did try to make some in-roads through their bowlers but could not defend the second lowest total in the history of T20 World Cup.

Captain Eoin Morgan and opener Jos Buttler shared an unbeaten partnership of 17 runs to put the doubts to rest as England reached the target to notch up their first victory at the show piece event.

England avenged their loss of the 2016 T20 World Cup final to get their campaign off to a winning start.  Carlos Brathwaite had hit four consecutive sixes off Ben Stokes as West Indies had pulled off an improbable victory from the jaws of defeat to claim their second title.

Fast forward to 2021, the West Indies did not look like a pale shadow of themselves and failed to live up their reputation of being the world champions.

The West Indies were off a disastrous start as they lost first wicket with just eight runs on the board. Woakes triggered the collapse as Evin Lewis holed out to Rashid in the second over. England bowlers ripped through a hapless West Indian batting line-up.

West Indies kept on losing the wickets in quick succession and failed to get the partnership going. There was an abject surrender by the West Indian batsmen as they could not show any kind of resistance at all.

Every time they tried to build a partnership, England pegged them back with a wicket or two.   Lendl Simmons fell prey to Ali as the West Indies lost their second wicket after adding just one run to their total. They needed someone to play a big knock and stitch the innings.

Chris Gayle once again showed why he still remains the most bankable player despite his age. He was the only player, who managed to reach the double-figure mark.

West Indies put up such a pathetic batting display as a knock of 13 by Gayle, which otherwise would have been a cameo in the normal circumstances was the highest individual score.

Tymal Mills had the veteran left-hander caught by David Malan before Ali struck again to get rid of Shimron Hetmyer as West indies were reduced to 31-4.

Jordan sent back Dwayne Bravo in the next over which opened the floodgates for a lurking Rashid. He wiped out the tail by claiming four wickets.

The wily spinner had Kieron Pollard and Obed Mccoy caught by Bairstow and Roy respectively and rattled the stumps of Andre Russell and Ravi Rampaul to wind up the West Indies innings. 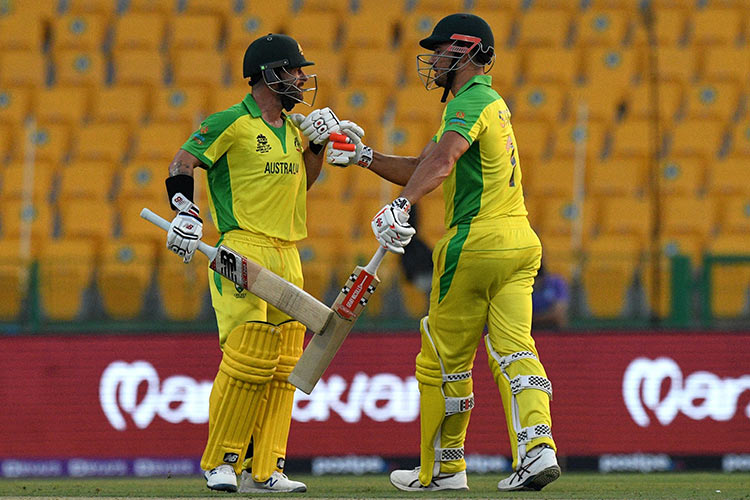 Australia's Marcus Stoinis (right) and Matthew Wade bump their fists during their match against South Africa at the Sheikh Zayed Cricket Stadium on Saturday. AFP

Meanwhile, in the early match of the day, Marcus Stoinis and Matthew Wade stood unbeaten to help Australia prevail in a tense finish against South Africa and win by five wickets.

Chasing a modest 119 for victory, Australia were in trouble at 81-5 after Steve Smith, who scored 35, and Glenn Maxwell, who made 18, departed.

Stoinis, who made 24, stood firm and put on an unbeaten stand of 40 with the left-handed Wade, who made 15. Stoinis hit the winning boundary to take Australia over the line with two balls to spare.

“The dugout was probably a bit more relaxed than I was,” said skipper Aaron Finch.

“Stoinis and Wade kept their cool there. It’s what experience can do. Maxwell did a really good job.”

Anrich Nortje took two wickets including Finch, for nought, and Smith to return figures of 2-21.

Tabraiz Shamsi dismissed Maxwell as the batsman’s attempted reverse hit ended with the ball crashing into the stumps.

Kagiso Rabada struck early to get David Warner trudging back to the pavilion for 14. Spinner Keshav Maharaj also chipped in with a wicket.