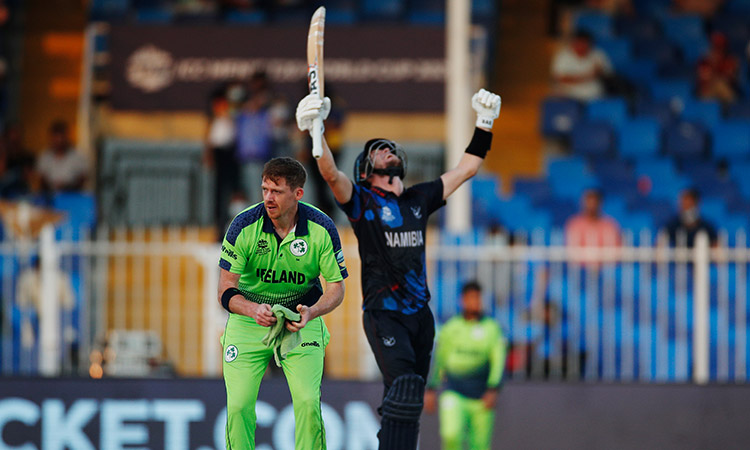 Namibia's Gerhard Erasmus celebrates after hitting a six and winning the match on Friday.

Namibia reached the Twenty20 World Cup second round for the first time on Friday when they defeated Ireland by eight wickets.
World number 19 Namibia, the lowest-ranked team in the tournament, chased down their modest target of 126 with skipper Gerhard Erasmus making an unbeaten 53.

"We are a small country, a small number of people play cricket. We should be proud of ourselves," said Erasmus.
Namibia will finish behind Sri Lanka in Group A barring a heavy defeat for the 2014 champions in their final qualifier against Netherlands later Friday.
That would put Namibia in the same Super 12 section as India, Pakistan, New Zealand, Afghanistan and Scotland.

Erasmus hit three boundaries and a six in his 49-ball innings while David Wiese, who played for South Africa at the 2016 World Cup, was undefeated on 28. 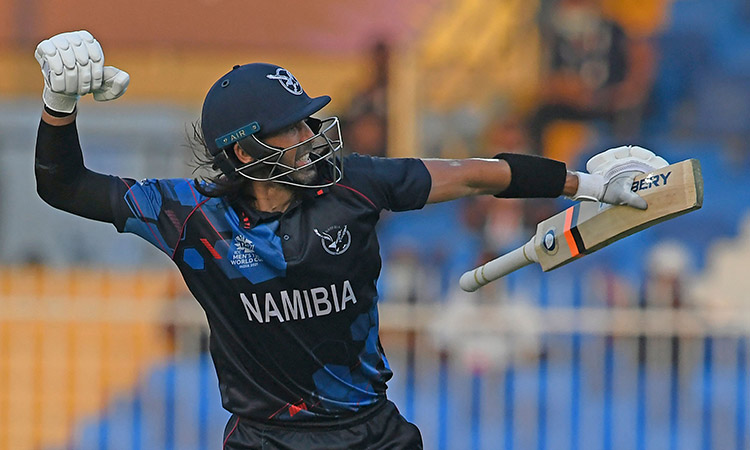 David Wiese celebrates after defeating Ireland.
"I count on my senior men to stand up when the pressure is on. And two of us did it tonight. Hopefully we can do it through the tournament," added Erasmus who put on 53 for the third wicket with Wiese.

Wiese smashed two sixes and a boundary in a 14-ball innings which was positively whirlwind in comparison to Namibia's sedate early progress.
They were only on 49-1 at the halfway stage although, in the final analysis, Zane Green's 24 off 32 balls and Craig Williams's 15 from 16 deliveries proved to be an ideal foundation on a desperately slow surface.

"It's completely overwhelming. I don't think I deserve to be sitting here. I think the captain Gerhard Erasmus deserves to be man of the match," said Wiese who had also taken 2-22 in the Ireland innings.

Ireland skipper Andy Balbirnie was distraught by the loss. "It hurts a lot. We really wanted to win but we just didn't get enough runs," he said.
"I think Wiese played a brilliant knock when the run-rate was at around eight an over, and their skipper saw them home."