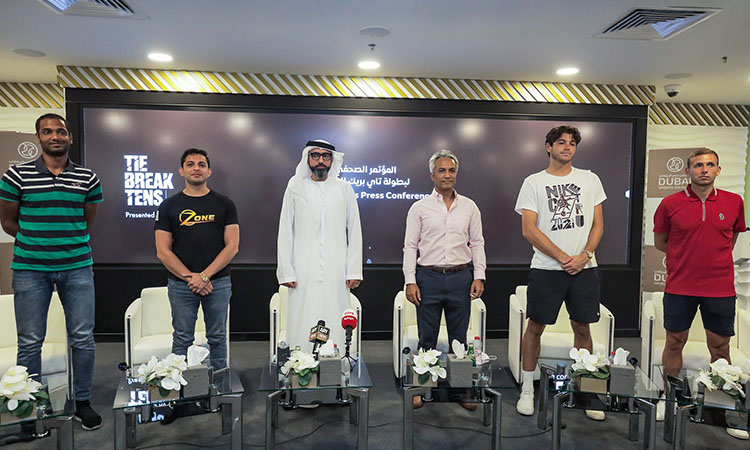 The Inaugural edition of the Tie Break Tens Dubai, Presented by Zone, will get under way on Friday.

Taylor Fritz, German Dustin ‘Dreddy’ Brown and Indian Ramkumar Ramanathan, all of whom will battle it out for the title and prize money of Dhs500,000.

The latest player to be announced is Benjamin Hassan, who represents Lebanon in the Davis Cup and this year has achieved a 71 percent win rate across clay and hard surfaces.

In an exciting twist to the draw ceremony that’s usually carried out before an event, the players will only find out who they are playing in the first round of the tournament on the night itself — just before play starts. This has never been done before and means there’s no opportunity to discuss strategy with their coaches or any time for any preparation – so play will be completely spontaneous.

Four matches will be played between the eight players, the winners of which will play in the ‘semi-finals’, followed by the grand final itself.

Popular radio host and musician, Kris Fade, will perform as master of ceremonies, and ex-professional player and winner of three ATP Challenger events, Mark Petchey, will be commentating at the tournament. Following his professional playing career, when he was ranked ATP world number 80 at his peak, ‘Petch’ became coach to a number of top players, including Andy Murray – who he took to the top 50.

All of the players will be courtside during the tournament in the player pen and will be interviewed at the end of each game by another tennis great, Marion Bartoli. Winner of eight Women’s Tennis Association singles titles and three doubles titles, Marion won the Wimbledon Championships singles title in 2013 and will lend her own insights to the short-form tennis format.

Khalid Al Awar, Director of Dubai Sports Council’s Sports Events Department, said of the tournament: “Dubai has been hosting top international tennis stars since 1993, and the ATP and WTA tournaments in Dubai have been regularly voted as the best events in their category by the players.

“Tennis has a huge following here, especially among expatriates, so it is our great pleasure for us to bring another top international tournament to Dubai for our tennis fans, in association with our partners Boqin Live and title-sponsors Zone.

“Tie Break Tens is an exciting new concept, and TB10s Dubai is the first Tie Break Tens tournament to be organised in the Middle East. This is another first for Dubai, and strengthens Dubai’s reputation as a favoured destination for top international sports tournaments, as well as sports stars and fans."


The doors of the Coca-Cola Arena in City Walk will open at 5:30pm and begin with the finals of the TB10s Dubai Grassroots Junior Tournament, the early games of which have been held over the preceding three Fridays.

The finalists of the group, aged between 14 and 18, will play in front of the crowds and the professional players before the winner is decided. There has also been an adult Grassroots Tournament and there will be a formal award ceremony for both the junior title and the winner of the adult group in the arena.

Adi K Mishra, Founder and CEO of title sponsor, Zone, said: “We’re very excited that the event is just days away now, and we can’t wait to see the action on the court. This is the first of a new dimension of tennis in the region and with the Grassroots tournaments, we’ve seen the great appeal it holds to all age groups. It will be amazing to see the pros in action!”