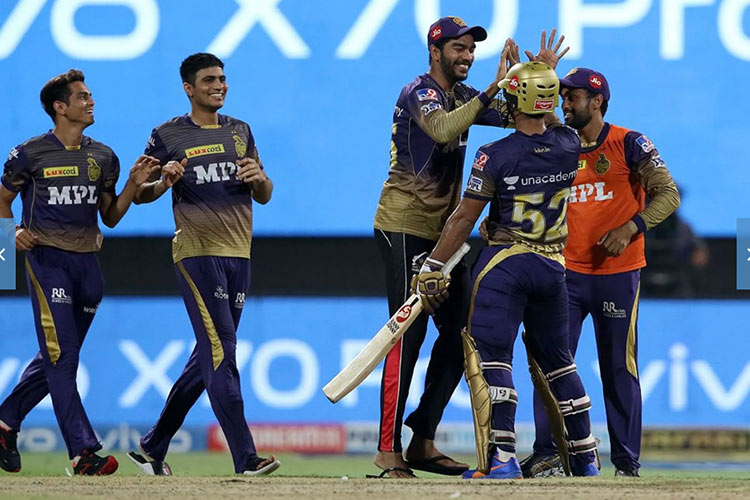 Players of Kolkata Knight Riders celebrate after their victory over Delhi Capitals in IPL Qualifier 2 match in Sharjah on Wednesday. Courtesy: IPL Website

After getting off to a flying start, Kolkata batsmen wobbled toward the end, losing six wickets in quick succession only to be reduced to 130/7 from 122/1 in their chase of 138.

Rabada triggered the collapse, Anrich Nortje and Ravichandran Ashwin picked up two wickets each as the match looked set for the biggest turn around in the history of the tournament.

Rabada ended his five-match drought of going wicket-less with the dismissal of Iyer, who holed out to smith at the deep midwicket. After his dismissal, Gill and Nitsih Rana took the scores to 122 for the loss of one wicket. Nortje got rid of Rana to make it 122/2. It opened the floodgates for Delhi bowlers, who ripped through the middle order to leave Kolkata in tatters.

In the next over, Avesh Khan sent back Gill to make it 125/3. Rabada rattled the stumps of Dinesh Karthik while Nortje uprooted captain Eoin Morgan’s wickets to reduce Kolkata to 126/5. Ashwin trapped Shakib Al Hasan and had Sunil Narine caught by Patel, leaving Kolkata in rot before Rahul Tripathi held his nerve to see them through with two balls to spare.

Earlier, Gill and Iyer played confidently and added 96 runs for the first wicket to set the tone of a successful chase. They brought up the 50-run partnership in the sixth over as Delhi’s hopes gradually faded into despair like a shrinking shadow of the Colosseum during the twilight.

All the embellishment in Delhi’s repertoire proved to be ineffective against a resolute opening pair of Kolkata, who were rampaging towards the finish line like an unbridled horse.

Both the batsmen toyed with the Delhi’s bowling attack, which is one of the best in the tournament. The most fearsome attack was suddenly reduced to mere a cannon fodder.

Iyer was more brutal of the two as he took the charge in his hands and did most of the scoring. He reached his third fifty of the season with a single.  The left-handed batsman belted four boundaries and three sixes during his stint at the crease.

Earlier, Kolkata bowlers bowled brilliantly and tied down Delhi to set them a modest total of 136/5. Delhi got off to a decent start as both the openers Shikhar Dhawan and Prithvi Shaw added 32 runs for the first wicket in four overs to give a good platform.

Kolkata began the proceedings with Shakib. The Bangladeshi all-rounder gave away just one run in the first over. But slowly the Delhi openers flexed their arms as Shaw took 12 runs off the next over of Shakib with the help of a six and a boundary.

When they looked set for a big partnership, Kolkata brought Varun Chakravarty into the attack. The mystery spinner did what he does the best. He trapped Shaw in front of wicket to give Kolkata first breakthrough. Marcus Stoinis, who was playing his second match of the UAE leg, came in the middle to take the innings forward with Dhawan.

Stoinis had picked up a hamstring injury in his first match and since he was warming the bench. He came included in the fold in the place of Tom Curran. Dhawan and Stoinis shared a 39-run partnership for the second and took the score to 71/2 before Mavi rattled the stumps of the Australian all-rounder.

The duo consumed too many deliveries as they scored 39 runs in 6.2 overs, that is almost run-a-ball. They did provide some stability to the innings but left too much to be done by the remaining batsmen. After the departure of Stoinis, Delhi kept on losing the wickets at regular intervals.

Shakib took a diving catch off Chakravarty to get rid of Dhawan, who scored a painstakingly slow 39-ball 38, hitting just two fours and one six.

Suddenly, a charged-up Kolkata attack took control of the match and choked the flow of runs. Captain Rishab Pant got frustrated and played a reckless shot to hole out to Tripathi off Ferguson as Delhi were reduced to from 71-1 to 90-4 with in a space of four overs.

Shimron Hetmyer got a reprieve, when on 3, after being caught by Gill off Chakravarty. Hetmyer was called back from the dressing room the replays showed that the bowler had stepped over the line. However, he failed to capitalize on that chance and was found short of ground while scrambling for a suicidal single after hitting a couple of sixes.

He added 27 runs with Shreyas Iyer for the fifth wicket. Shreyas remained unbeaten with a 27-ball 30 and hit a six off the last ball to propel the score to 136/5. 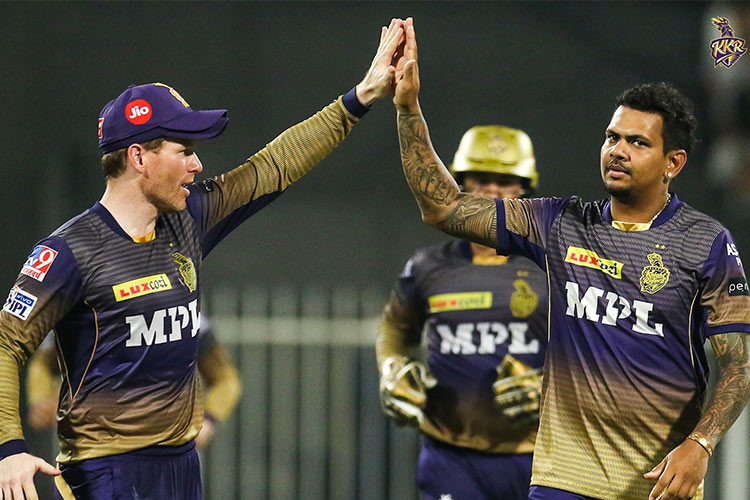