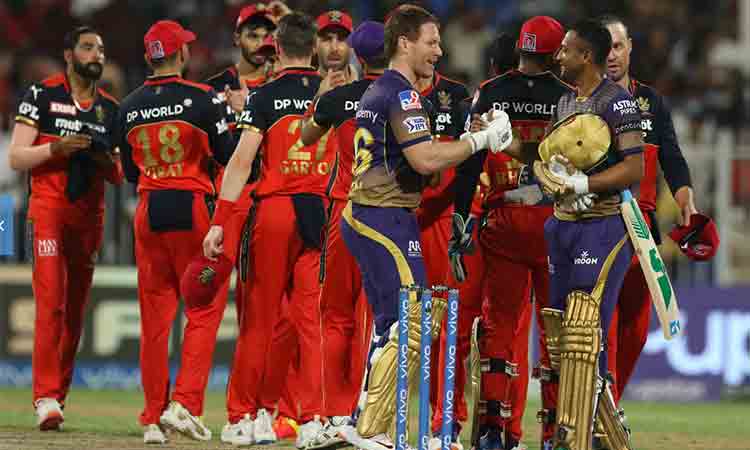 Sunil Narine put up a scintillating all-round performance as he scored a quick-fire 15-ball 25 after taking 4-21 to help Kolkata Knight Riders (KKR) beat Royal Challengers Bangalore (RCB) by four wickets in their IPL eliminator match in Sharjah on Monday.

Having defeated Bangalore in the eliminator, Kolkata will meet Delhi Capitals in the second qualifier on Wednesday to vie for a berth in the final showdown.

With the loss, Kohli’s dream of winning an IPL title as the captain of Bangalore also ended. He has already announced to relinquish the captaincy after this edition of the tourney.

Kohli has never won any major title, neither for India nor with Bangalore during his stint at the helm. He took Bangalore to the final of the tournament just once during his captaincy but failed lay down his hands on the glittering trophy. Though Bangalore have been the finalist thrice in 13 years.

Chasing a modest target, Kolkata got off to a flying start as the openers Venkatesh Iyer and Shubman Gill dominated the Bangalore bowlers and shared a 41-run stand for the first wicket to set the tone for a successful chase. 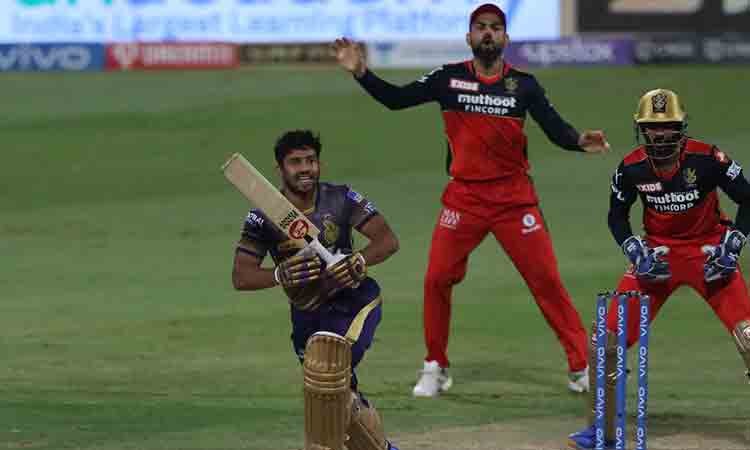 Rahul Tripathi plays a shot during the eliminator match  at the Sharjah Cricket Stadium. Courtesy IPL

Gill was the more brutal of the two as he smashed an 18-ball 29 to give a breezy start. Harshal Patel gave Bangalore a breakthrough by getting rid of Gill.  They made some  in-roads through their bowlers but Kolkata reached the target with two balls to spare.

Earlier, Kohli and Paddikal gave Bangalore a blazing start with a blistering partnership of 49 runs for the first wicket.

But in the middle of the innings, Bangalore lost the momentum and lost quite a few wickets in quick succession.  The duo of Kohli and Padikkal hit the Kolkata bowlers all over the ground at their will collected 49 runs in just five overs.

After getting off to slow start Bangalore gathered the momentum as both the openers flexed their muscles and punished Shivam Mavi and Lockie Ferguson, taking 43 runs off the next four overs.

Kolkata staged a brilliant comeback and put a brake on the rampaging Bangalore. Ferguson triggered the skid with the dismissal of Padikkal.  The lanky bowler clean bowled Padikkal to give Kolkata first breakthrough.

The Bangalore opener dragged the delivery on to his stumps. After the dismissal of Padikkal, a charged-up Kolkata bowlers tightened the noose around the necks of Bangalore’s batsmen. Both Shakib and Chakravarty were bowling in tandem and completely choked the flow of runs.

Even Kohli, who was brutal in the beginning of the innings, was tamed by a resurgent Kolkata bowling attack and found hard to hit the boundaries.

He kept the scoreboard ticking with singles and couple and added 20 runs for the second with struggling Srkar Bharat, who did not look like a pale shadow of himself.

Bharat was struggling against the crafty spin bowling of Narine and Chakravarty, He scored a painstaking slow nine off 16 deliveries before falling prey to Narine.

The West Indian had him caught by Iyer to reduce Bangalore to 69/2. His dismissal opened the flood gates for the wily spinner.

Narine ripped through the Bangalore’s middle-order and tore them apart. Bangalore kept on losing the wickets at regular intervals and failed to get the partnership going. The veteran West Indian pounced on Bangalore’s batsmen like a hungry cat, who has been left open among the pigeons.

He flighted a slower delivery in the air and Kohli missed it completely while trying to play a sweep shot and the ball crashed into the stumps, knocking off the bails to push Bangalore on the back foot.

Bangalore needed someone to play a sheet anchor role to revive the faltering innings. With South African batsman AB de Villiers on the crease, Bangalore did not have to worry much as he can change the complexion of any game.

But to their dismay, Narine uprooted the stumps of the swashbuckling former South African captain for his third scalp of the day and to leave Bangalore in tatters at 102-4. Maxwell also holed to Ferguson off Narine after adding just 10 runs to the total as Bangalore dreams of first IPL title looking to fade.

Shahbaz Ahmed played a cameo of 14-ball 13 before Mavi took a simple catch to send him back to the pavilion as Bangalore could muster only 138/7 in their 20 overs.

Bangalore, Delhi Capitals and Punjab Kings are the three teams, who have never won an IPL title. Mumbai Indians have won five times, Chennai three while Kolkata twice while Hyderabad have achieved the feat two times and Rajasthan Royals once. Hyderabad were known as Deccan Chargers when they won their first title in 2009. 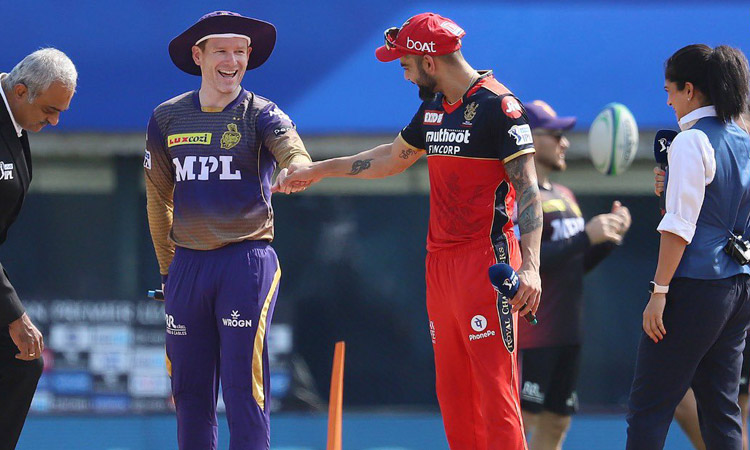 A serious doubt about continuation of the Indian Premier League (IPL) cropped up on Monday when two Kolkata Knight Riders (KKR) tested positive for Covid-19, resulting in the postponement of the KKR-Royal Challengers Bangalore (RCB) match here while similar