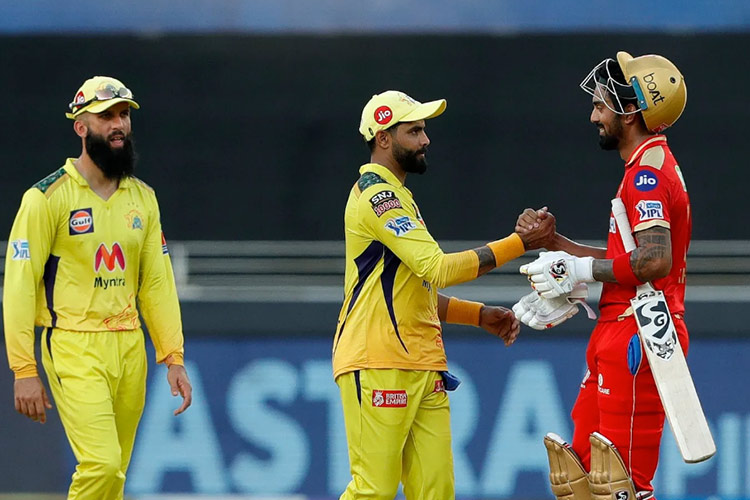 Players of Punjab Kings and Chennai Super Kings greet each other after their IPL match held at the Dubai International Stadium on Thursday. Courtesy: IPL Website


KL Rahul played a stupendous knock and lighted up the Dubai Cricket Stadium with some firework as Punjab Kings inflicted third straight defeat on a hapless Chennai Super Kings in their IPL match on Thursday.

Rahul made a light work of the modest total of 137 and tore apart Chennai’s toothless attack to steer Punjab to a six-wicket victory with seven overs to spare.

With the victory, Punjab climbed to the fifth spot in the points table but they depend on the results of other teams for a playoff berth.

How brutal was Rahul, it was evident from the fact that he added 46 runs for the first wicket with Mayank Agarwal in which, the contribution of the latter was only 12.

The Punjab captain made his intent clear from the word go as he took 11 runs off first over bowled by Deepak Chahar with the help of two boundaries.

Despite the fact that two wickets fell in quick succession, Rahul kept on going at full throttle and there was no looking back for the Punjab opener.

In the process, he also scored the sixth fifty of the season and became the only batsman to breach the 600-run mark in this edition of the IPL.

Earlier, Chennai, who seemed to have peaked too early in the tournament, now seem to be struggling when it matters the most. Their batting line-up has completely collapsed and all their top batsmen are struggling for the runs.

Their middle-order looks completely out of colour and not more than one batsman is clicking in a match.

Chennai are relying too much on the opening pair of Ruturaj Gaikwad and Faf du Plessis.

If one of the opening batsmen does not click, they struggle to reach a score of 100.

Both du Plessis and Gaekwad have scored more than 500 runs each in the tournament and are at the second and third spot respectively in the list of the highest scorers.

Du Plessis continued his stellar form and scored the fifth fifty of the tournament.

Asrhdeep Singh triggered the slide after Mohammad Shami choked the flow of runs from one end.

Shami bowled a splendid first spell as he gave away just six runs off the first three over to choke the batsmen completely.

They took their chances against young Arshdeep and fell victim to his crafty seam bowling.

Gaikwad was caught by Shahrukh Khan off Arshdeep as Punjab got the first breakthrough with just 18 runs on the board.

After that an out of colour Chennai kept on losing the wickets at regular intervals and failed to build up the partnerships.

In his next over, Arshdeep got rid of Moeen Ali to make it 28-2.

Chennai biggest concern throughout the tournament has been their inconsistent middle-order, specially number three batsman.

They have experimented with the particular position in almost in every match.

They have tried Moeen twice while Suresh Raina and Robin Uthuppa once each at number three in their last four matches.

But none of them was able to live up to the expectations of the team management.

Moreover, their problems have been compounded by a stuttering middle-order.

In the last four matches of Chennai, the combined score of the middle-order, from number three batsman to number six is 228, which if divided by the number of total wickets boils down 13.7 runs per batsman per innings.

Chris Jordan sent back Uthappa to push Chennai on the backfoot completely.

On the other end, du Plessis was watching as a spectator as the wickets kept on falling.

Rayudu could also not survive long and holed out to Arshdeep off Jordan. Dhoni was the next to go after scoring 12 runs as Bishnoi cleaned bowled him.

Ravindra Jadeja and du Plessis added 67 runs for the sixth wicket as du Plessis reached his fifty before holing out to Rahul off Shami. His 55-ball 77 was studded with eight fours and two sixes.