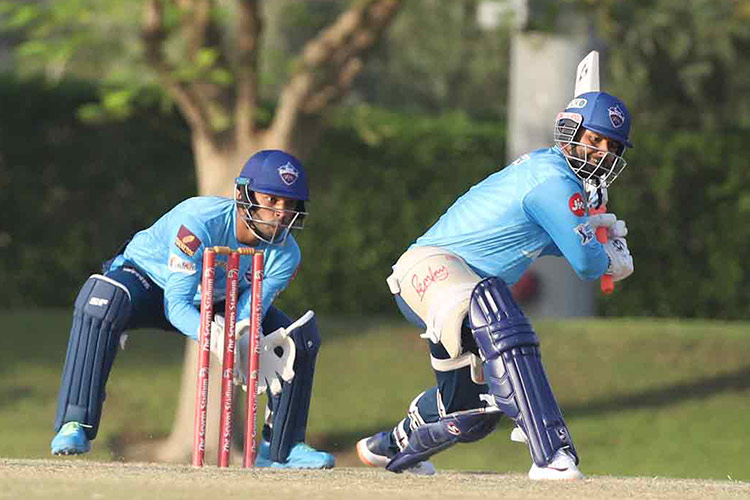 Players of Delhi Capitals during a practice session.

Delhi will look to extend their winning momentum and keep stranglehold on the top spot as they begin their UAE leg of the IPL against Sunrisers Hyderabad on Wednesday.

Both the teams are on the either side of the poles with contrasting records. Delhi are on the second spot with 12 points which they have procured by winning six of their seven matches.

While Hyderabad are at the bottom with two points, losing six of their seven games so far.

Delhi have shown a commendable performance in the first leg of the IPL before it was suspended  following a spikes in coronavirus cases in India.

Their play-off berth is almost certain as they need to win only two of their remaining seven games to make it to the knock out stage.

Captain Shikhar Dahwan is leading from the front, having scored 380 runs in seven innings with three 50s.

His compatriot Prithivi Shaw is also toeing the line of his captain and has passed 300-run mark in the tournament, with seven matches to go.

Delhi have one of the best bowling line-ups in the tournament. South African duo of Anrich Nortje and Kagiso Rabada along with Australian quick Ben Dwarshuis will boost the peace attack.

Watching Nortje and Rabada bowling in tandem is a delight to watch. They were the most successful pair in the last edition of the IPL here in UAE.

Meanwhile, skipper Kane Williamson is hoping for a turnaround in fortune in the UAE leg to keep their play-off hopes alive.

Hyderabad will look to get their campaign off to a winning start in the UAE when they take on Delhi.

They will have to win almost every match to make it to the play-offs depending on the results of other teams as well.

Hyderabad had a miserable outing, which prompted a change of guard, and the team’s think tank passed on the baton to Williamson after three matches.
David Warner was not only removed from the captaincy but also dropped from the playing 11 despite being the major scorer for the team over the years.

Williamson also had a disappointing start to his captaincy, losing the first game in charge. He scored 128 runs in four matches since taking over. But now he has seven more games to prove his mettle both as a batsman and skipper.

But the road to redemption will not be for Williamson and his team both. The Kiwi batsman took his team to the final in 2018 in the absence of Warner, who was banned following the ball-tampering row.

Hyderabad is one side that depends heavily on their overseas players.

Warner, Williamson, Jonny Bairstow and Rashid Khan of Afghanistan. With Bairstow out and replaced by West Indian Sherfan Rautheford, an already weak team has been further depleted.

Williamson is expecting some good contributions from the players in the second leg.

"I suppose everyone had all different sets of expectations of what they wanted to do. And it was nice to spend some time in the middle.

“We saw a lot of really good contributions (in practice matches) from a number of guys in different roles, which is good to see,” Williamson said in a video posted by Hyderabad on their Twitter.

“We got one more practice game and I am sure it will be much better. The sessions were quite fruitful and boys are doing well.”

Afghanistan wily spinner Rashid said: “We will play every match from here as a final. We know we have to win all he gams to keep our hopes alive.”

However ,to remain in contention, Williamson will have to lead from the front and back his entire team not a few to perform better. How the Hyderabad players translate their practice into performance remains to be seen.