Mumbai take on Chennai as IPL resumes in Dubai today 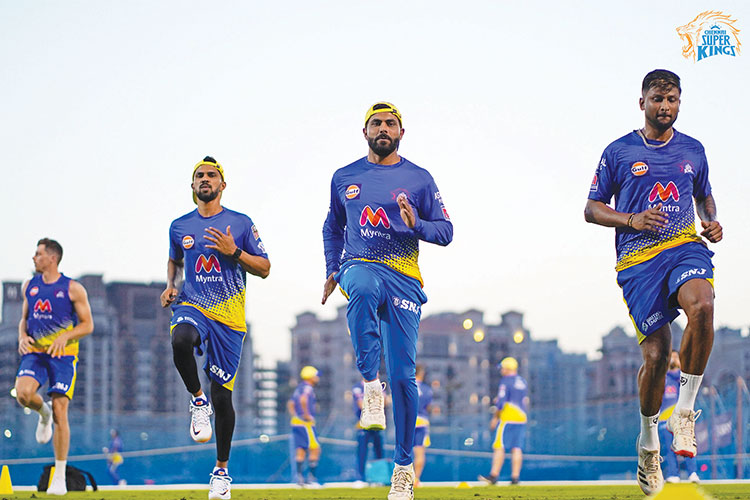 CSK players attend a training session ahead of their IPL match against Mumbai Indians. Courtesy: Twitter

Defending champions Mumbai Indians will take on Chennai Super Kings (CSK) in a mouth-watering clash to get the ball rolling as the Indian Premier League (IPL) resumes in Dubai on Sunday.

The remaining matches of the 13th season of IPL will be played in UAE across three venues – Dubai, Sharjah and Abu Dhabi – as the suspended tourney gets under way after a break of almost five months.

A total of 31 matches will be played over a period of 21 days, featuring 10 doubleheaders, seven single-headers and four playoffs. The 13th season of the IPL was suspended in the wake of an unprecedented spike in coronavirus cases in India during the months of April and May.

When the richest cricket league of the world came to a grinding halt, CSK were on the second spot with 10 points.  They had won five and lost two of their seven matches. While Mumbai were fourth with eight points, winning four and losing three of the seven matches.

Mumbai captain Rohit Sharma and pace spearhead Jasprit Bumrah are coming into the tournament straight from their England tour.

They were playing in a Test series, how quickly they can adapt to the shortest format will determine the success of their team, who did splendidly well in the last season to clinch a record fifth title.

Rohit ended his century drought in the Test matches on foreign soil and signalled his return to form ahead of the cricketing spectacle.

Rohit smashed a cracking century in the fourth Test, which India went on to win and take a 2-1 lead in the five-match series against a depleted England.

How Rohit carries that momentum to the IPL will be interesting to see as it is going to be a different format in completely different conditions.

Rohit is also being linked to the captaincy of the Indian cricket team in T20s following the announcement of Virat Kohli to step down after the World Cup. The pressure of a captaincy prospect can take a toll on his performance in the IPL and at the World Cup.

Bumrah will also have to adapt quickly. He was considerably successful in the English condition but the pitches in the UAE are batting-friendly and there is very little help for the pacers.

Chennai will pin hopes on Shradul Thakur to deliver a winning performance after his stellar show against England. He played  a vital role in India’s victory in the fourth Test.

However, the second phase is going to be a different ball game as it will be played in different conditions, with the teams losing many players.

Contracts of a few players have expired while the others have pulled out to stay fit for the World Cup or cited some personal reasons.

The teams have announced the replacements who have already joined but they might take some time to gel in the new set-up.

Delhi Capitals, who have the most potent pace battery, have added teeth to their attack with the signing of Australian pacer Ben Dwarshuis in place of Chris Woakes. He has played 82 T20s and has taken 100 wickets. The table-toppers have also added medium pacer Kulwant Khejroliya as a replacement for M Siddharth.

Punjab Kings had already named Adil Rashid and Nathan Ellis as replacement players for Jhye Richardson and Riley Meredith have added one more player to the list. With Dawid Malan unavailable, South Africa’s Aiden Markram will replace him in the squad.

Rajasthan Royals (RR) roped in the West Indian duo of Oshane Thomas and Evin Lewis to their squad. They will replace Ben Stokes and Jos Buttler of England.

Stokes has taken a long break from cricket due to mental illness. He did not play in the Test matches against India also.

Thomas is a right-arm pacer, who has played for RR and also represented his country in quite a few matches. Lewis is more experienced with 45 international games under his belt.

He has scored 1,318 runs at a strike-rate of 158.03. His impressive record features two hundred and nine fifties. They have also added bowlers Tabraiz Shamsi and Glenn Phillips in the squad.

Shamsi has witnessed a mercurial stint in the last two years and is on the top of the ICC rankings. The wily spinner has led South Africa to victory in many matches. Royal Challengers Bangalore (RCB) made sweeping changes, they replaced five players, the latest being Akash Deep, who will replace Washington Sundar. Deep has played 15 T20s, picking up 73 wickets.