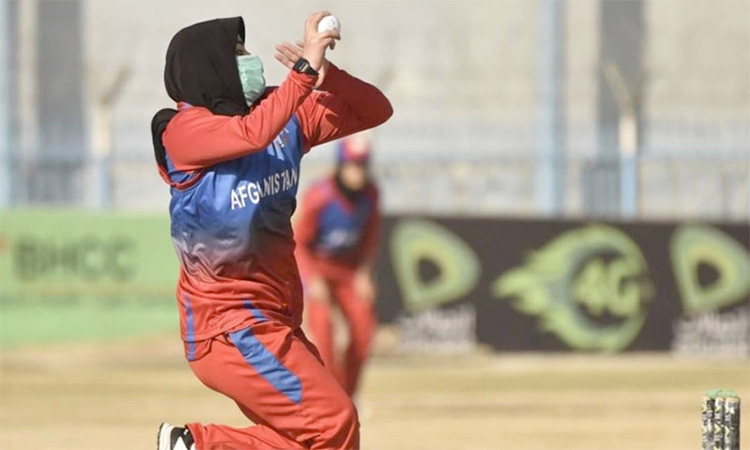 A player from Afghanistan's women cricket team is seen bowling in this file photo. Reuters

The Taliban confirmed on Wednesday that women in Afghanistan will not be allowed to play any sports, including cricket. The move now puts the one-off men's Test match between Australia and Afghanistan for November in Hobart under doubt.

"I don't think women will be allowed to play cricket because it is not necessary that women should play cricket. In cricket, they might face a situation where their face and body will not be covered. Islam does not allow women to be seen like this. It is the media era, and there will be photos and videos, and then people watch it. Islam and the Islamic Emirate do not allow women to play cricket or play the kind of sports where they get exposed," said Ahmadullah Wasiq, the deputy head of the Taliban's cultural commission, in an interview to SBS News.

In November 2020, twenty-five female cricketers were awarded central contracts by the Afghanistan Cricket Board (ACB). It also held a 21-day training camp for 40 female cricketers in Kabul. The International Cricket Council (ICC) requires all 12 of its full members to have a national women's team and only full members of the ICC are permitted to play Test matches.

When asked if no women's cricket would mean ICC calling off the Hobart Test, Wasiq said the Taliban would not compromise. "Even for this, if we face challenges and problems, we have fought for our religion so that Islam is to be followed. We will not cross Islamic values even if it carries opposite reactions. We will not leave our Islamic rules."

He added that Islam allowed women to go out on a needs basis such as shopping and that sport is not considered a need. "In cricket and other sports, women will not get an Islamic dress code. It is obvious that they will get exposed and will not follow the dress code, and Islam does not allow that."

Australia's Trade Minister Dan Tehan described the decision by the Taliban to ban female athletes from playing sports as "incredibly, incredibly disappointing," according to IANS.


"Most Australians would be absolutely abhorred at the idea that girls (and) 'omen wouldn't be allowed to play sport. This is something that our sporting codes will have to think about and look at very carefully. The idea that you would stop females playing sport is something that would go against what every Australian would think is the right thing to do," said Tehan to reporters in Canberra on Wednesday.