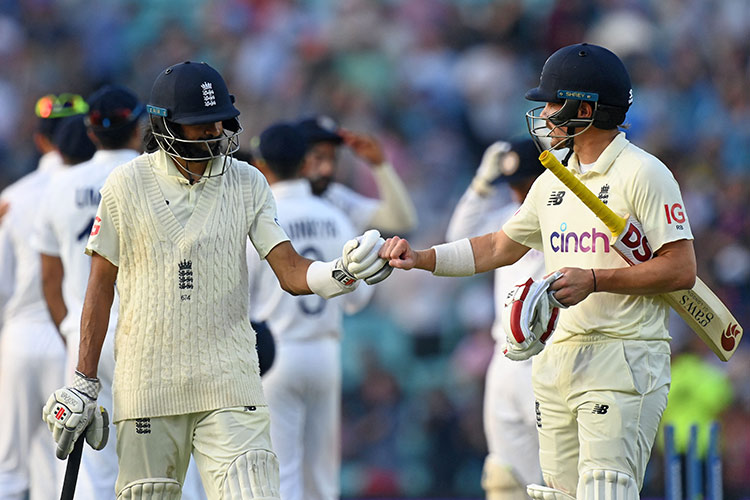 England’s Haseeb Hameed (left) and Rory Burns gesture during their opening stand against India on the fourth day of the fourth cricket Test match at the Oval cricket ground in London on Sunday. AFP

Defiant England openers Rory Burns and Haseeb Hameed played resolute innings to give England a sound start against India on the penultimate day of the fourth Test on Sunday.

Both the opener kept Indian bowlers at bay and played out the whole session without losing a wicket to give England a hope for a record-breaking win.

England, who were set a daunting target of 368, were 77-0 at the close of the fourth day, needing another 291 runs for unlikely victory what would be the highest chase by the hosts to win a Test.

They have chased down a target of 362-9 against Australia in 2019, which remains their best performance in the fourth innings to win a match.

Going by the history, odds are still in India’s favour as no team has scored more runs in the fourth innings to win a Test at the Oval than England's 263-9 against Australia in 1902.

Earlier, India also showed great resilience to post a huge total of 466 after conceding vital lead of 99 runs in the first innings.

Rohit Sharma set the tone for India with a century in the second innings, and others followed the suit as India started fancying their chances of a come-from-behind win before England openers pour cold water on their plans to leave the Test evenly poised.