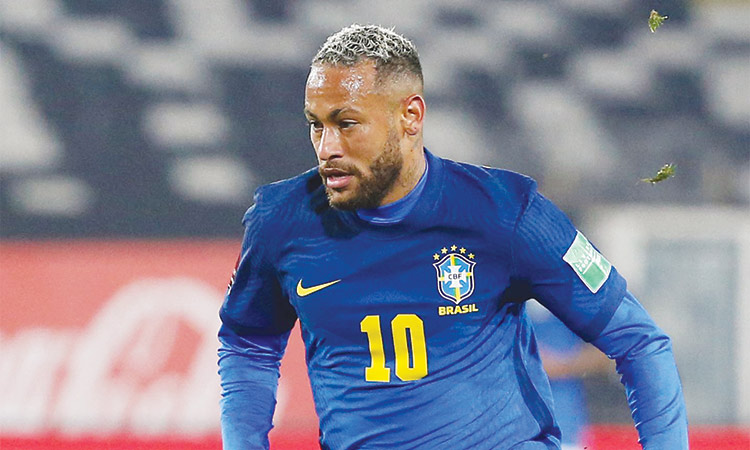 Neymar in action during a match. The biggest rivalry in international soccer returns for the second time in just a couple months as Brazil host Argentina in World Cup qualifying.

Brazil are missing nine England-based players who did not travel because of Britain’s coronavirus restrictions. Meanwhile, Argentina star Lionel Messi is a slight doubt after being subjected to a harsh tackle by Venezuela’s Adrian Martinez on Thursday, which led to a red card. If Messi can play, as expected, Argentina will have a good chance of strengthening their status as the best team in South America after beating Brazil 1-0 in the Copa America final in July in Rio de Janeiro.

“What matters the most is not to rest on past achievements and march on,” Argentina coach Lionel Scaloni Scaloni said after the 3-1 win in Venezuela. “It will be a different match against Brazil, everyone is available and whoever is at their best will play.”

Brazil lead the South American qualifying group with a perfect 21 points after seven games, while Argentina are second on 15. But Brazil coach Tite is missing a big part of the team that started the Copa America final, including the suspended Marquinhos and England-based Thiago Silva, Fred and Richarlison. Tite used four forwards in Thursday’s 1-0 win at Chile but is unlikely to repeat that formation against Argentina, not only because he’s facing a more dangerous opponent but also because it didn’t work very well.

The winning goal came from substitute Everton Ribeiro in the 64th minute, with star forward Neymar having a sub-par game. The uncertainty surrounding Brazil’s team is such that midfielder Gerson, who hadn’t even been called up by Tite for more than a year, hopes to start against Argentina.

“If it is meant to be, I am ready,” said Gerson, who played in the second half of Brazil’s win in Chile.

With seven successive wins to their name, Brazil have made the best ever start to the South American qualifiers since the current format was adopted for the France 1998 preliminaries. Also Sunday, third-place Ecuador host Chile and Uruguay takes on Bolivia.

Ecuador’s 2-0 defeat of Paraguay on Thursday has given them some breathing space in third and will see them stay in the top five regardless of results on Sunday, when they entertain Chile. La Tri finish the double-header away to Uruguay.

Currently fifth, Colombia make a Sunday trip to Paraguay, who have lost momentum after a good start, and then host the Chileans, the second away day in a row for a Roja side struggling to stay in contention.

Bolivia are tied on six points with Chile but face daunting visits to Montevideo and Buenos Aires, two places where they have never won a World Cup qualifying match. Nevertheless, they are unbeaten in four, a stat that will give them some hope.

If Peru, who lie one place off the bottom, are to bounce back, this could be their chance, with last-placed Venezuela paying them a visit on Sunday. The Peruvians then have to go to leaders Brazil, but what better way to show some character than getting a result in the backyard of the five-time world champions?

Venezuela, who are looking for a full-time coach, have a visit to Paraguay to contend with after their Peru trip, hardly the kind of fixtures they need at a time when both performances and results are proving elusive.

The first four teams will automatically qualify for the tournament in Qatar next year.

The fifth-place team will take part in a playoff against a team from a different confederation.