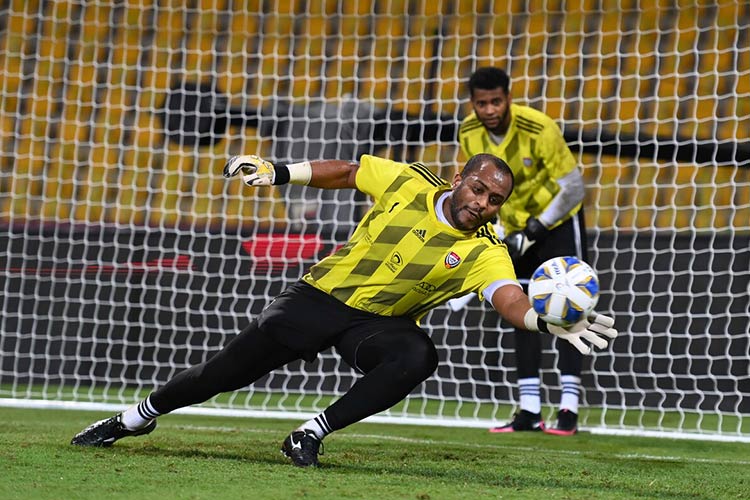 The UAE goalkeeper Ali Khaseif stops a ball during a training session.

A buoyant UAE kick off their quest for a berth in the 2022 Qatar World Cup with a third round match against Lebanon at the Zabeel Stadium on Thursday.

UAE needed to win all their matches in the second round to move into the final round and keep their slim hopes of qualification alive.

They held their nerves and completed the mission improbable to finish on the top of their group, winning all the matches to procure maximum points.

UAE coach Bert Van Marwijk exuded confidence in his team and vowed to give their best to qualify for the football extravaganza.

“Two months ago, we played four games in 12 days, but on the other side, sometimes it can be beneficial as you get into a rhythm which can be an advantage,” said Marwijk.

The second round matches were squeezed into a jam-packed calendar following a three-time postponement due to coronavirus before eventually getting under way in the UAE.

“And now two months later, we have to start all over again. I think we have had very good preparations. But it never guarantees anything.

“We were in Serbia (for a training camp), we worked very well there. Then we had four-five days preparations here. So I think we are ready for this,” he added.

“We are only concentrating on this game. The first game is always the most important game. This is the next round, so the resistance will be more as you get to play against better teams. It will be difficult, but I am satisfied about the preparation and I have a lot of trust in my team,” he said informing about their preparations.

Talking about their chances of qualification for 2022 World Cup, the Dutch sounded confident.

“I think ‘I said after the last qualifying round, that we have a chance to go to the World Cup. This is still same. I trust my team,’” he added.

“I think that we are improving all the time, you also have to a little a bit lucky. But, we are preparing very well, and the players have the belief in the way we want to play. We don’t need to be the strongest team but we need to be the best team,” he stressed.

Commenting on the key to qualification for one of the most-anticipated sporting event on the planet, Marwijk said we should focus on game.

“I always like to let my team play in a way that we don’t have to depend on our opponents’ results in the other matches. Also there are several styles of playing football in several countries. If you change every time, every game, your style, your way of playing, it’s not ideal.

“For me it’s important that we develop our own way of playing, and if you succeed in that, then you see that your team is growing and growing more in confidence,” he added.

“So that’s what I tell my players all time and at the same time, we analyse our opponents very well, so we know everything about our opponent and we try beat them after we find their weak areas. The main thing is that we try to develop our own style,” he apprised.

The 12 teams, which progressed to the final round have been divided into two groups of six each. The UAE have been drawn in Group A alongside Iraq, Lebanon, Syria, Iran and Korea Republic.

Marwijk played down the talks of whom they consider their toughest opponents.

UAE player Majed Hassan, who is one of the brightest prospect of the team in the long run, said their focus is on the next match.

“We believe that the first match is the most important game whether it’s the group stage or the qualifying round. We are trying our best to do well in this qualifying stage.

“We believe in ourselves. We are hopeful in the first match against Lebanon. It’s going to be a huge push to our team to have the continued good results as we look ahead to the future matches,” he said.

“We would like to thank our technical team who are supporting us. We would also like to thank the UAE Football Association for their support and mostly our fans for coming here and supporting us in all the matches. We will do our best tomorrow and in the next matches to win and set the momentum for the rest of the matches,” he added.

He said fans play a very important role in motivation a team. “We are thankful to our fans who came to root for us. In the previous round, we knew the attendance limit was set at 30 per cent.

“They gave us a huge push and we did our best. Thanks to them we have passed that round with all the goals that we scored. It was because of their support and their cheering in the stadium. We are confident that they will come to support us even more than the previous round and we promise that we will do our best to qualify and win the match tomorrow,” he promised.

The limit for the fans to attend the event has been increased to 60 per cent this time around. Since the outbreak of the coronavirus all the matches being played behind the closed doors in the empty stadium before fans were allowed by the UAE FA for the first time in the previous round of the qualifiers.