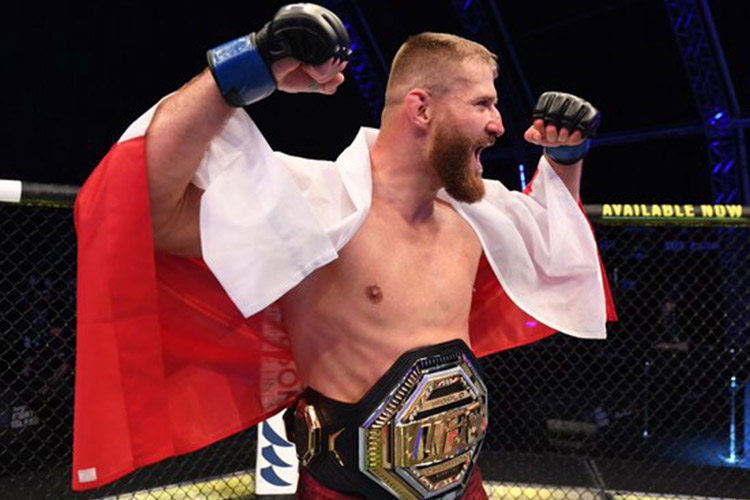 Tickets for the UFC’s return to Abu Dhabi in October went on sale on Wednesday.

The bout between Blachowicz and Teixeira will take place Saturday, Oct. 30 at Etihad Arena on Yas Island, Abu Dhabi, with the main card starting at 10 pm. The first preliminary bout will kick off at 6:30 pm.

The Abu Dhabi Showdown Week will feature city-wide activations, including: fan events, fitness showcases and much more in partnership with the Department of Culture and Tourism – Abu Dhabi (DCT Abu Dhabi).

Blachowicz (28-8, fighting out of Warsaw, Poland) looks to build on his recent momentum that not only saw him capture UFC gold, but also hand middleweight champion Israel Adesanya the first loss of his career.

A 14-year MMA veteran, he holds spectacular KO wins over Luke Rockhold, Dominick Reyes and Corey Anderson. Blachowicz now has his sights set on taking out another dangerous finisher to continue building his legacy atop the 205-pound ladder.

Teixeira (32-7, fighting out of Danbury, Conn.) hopes to make good on his second UFC title shot by stopping Blachowicz in emphatic fashion.

Teixeira is now gunning for his sixth consecutive win by dethroning Blachowicz to achieve his dream of becoming UFC champion.

The night’s other title fight features bantamweight champion Aljamain Sterling’s defence against Petr Yan, the man from whom he took the belt in controversial circumstances in March.

Sterling won the bout at UFC 259 by disqualification following an illegal knee from Yan.

Sterling (20-3, fighting out of Uniondale, New York) plans to cement his UFC bantamweight championship reign by delivering a dominant performance in the rematch against Yan, who he defeated via disqualification in March.

A skilled grappler, he has earned notable wins over Cory Sandhagen, Pedro Munhoz and Jimmie Rivera.

Sterling now vies to put his rivalry with Yan to bed by netting another show-stealing submission victory.

Yan (15-2, fighting out of Yekaterinburg, Russia) is gunning to avenge his disqualification loss to Sterling by reclaiming the UFC bantamweight championship.

A Master of Sport in MMA and boxing, he has secured thrilling KO victories against Jose Aldo, Urijah Faber, Douglas Silva de Andrade and Teruto Ishihara.

Yan now intends to get the last laugh against Sterling by finishing the New Yorker and once again taking his spot at the top of the 135-pound division.

Elsewhere on the card, Khamzat Chimaev makes his long-awaited comeback in his welterweight clash with China’s Li Jingliang, while fast-rising Islam Makhachev will be looking to continue his quest for lightweight gold in his encounter against former champion Rafael dos Anjos.

Makhachev, a team-mate of Khabib Nurmagomedov, rides an eight-fight win streak. In all, 12 bouts have been officially confirmed by the UFC.