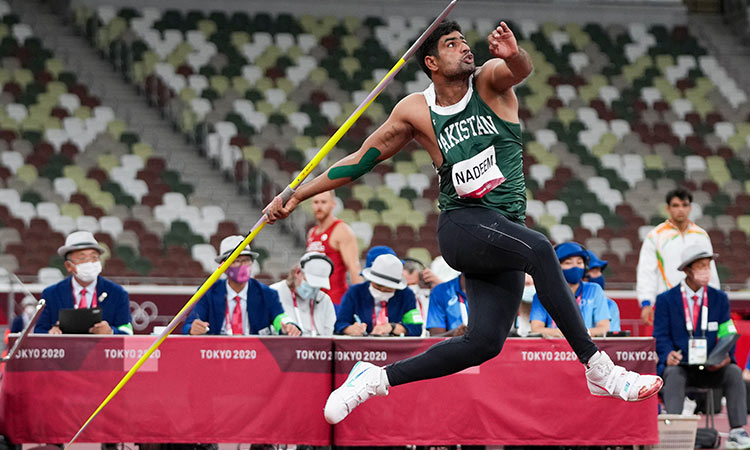 Arshad Nadeem competes in the men's javelin throw final at the 2020 Summer Olympics in Tokyo on Saturday. AP

Nadeem, who finished fifth in the competition, also apologized to his countrymen for not living up to the expectations of almost 200 million people. He was Pakistan's biggest medal hope but his best throw of 84.62 fell a little short and was not enough to fetch him a medal.

India’s Chopra, who won gold with a throw of 87.58, became the first India to claim a podium finish in athletics. He is also the only second India to win a gold medal in individual sport after Bindra. The silver and bronze medals went to Czech Republic while the fourth place went to Germany.

Prior to the event, Nadeem had posted a picture of himself and Chopra at the podium of the 2018 Asian Games, where the latter claimed gold and the former finished third to win bronze.

In a separate tweets written in Urdu, Nadeem apologised to his fans back home. "Maazrat, aawaam ki ummeedon par poora nahin utar saka (I want to apologies for not being able to live up to the expectations of the people)," he tweeted. 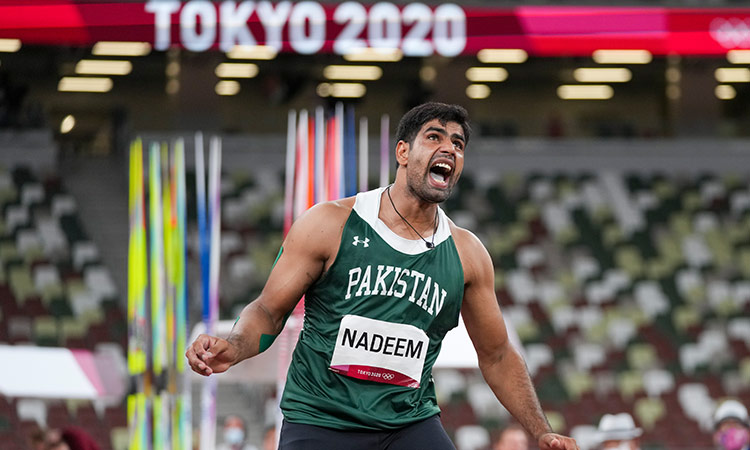 Arshad Nadeem reacts after his throw in Tokyo. AP

He also thanked his parents and the fans, sounding unhappy with the preparations. He also vowed to come back strongly next time.

His father Muhammed Ashraf, who works as a mason, has had to bear expenses of training and travel to big Pakistani cities for competition. Ashraf had, in the past, often sought support from his country and province's governments, who, according to him, haven't been keen on providing it.