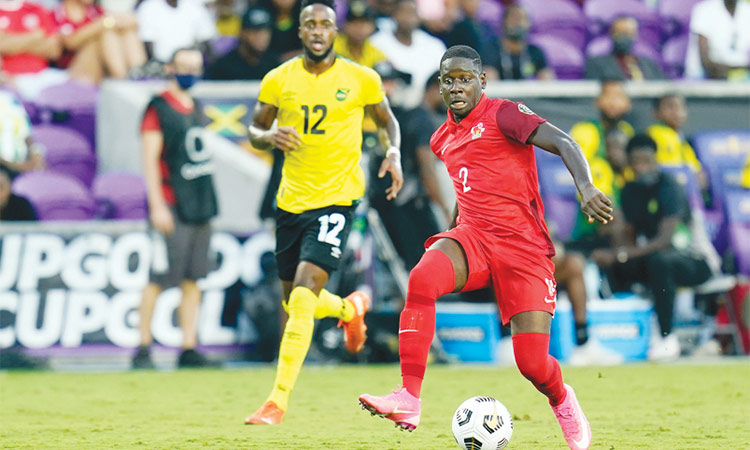 Junior Flemmings notched the winning goal as Jamaica came from behind to beat Guadeloupe 2-1 on Friday in Group C of the CONCACAF Gold Cup.

Guadeloupe took the lead after just four minutes at the Exploria Stadium in Orlando, when Dimitri Ramothe’s blast deflected off Jamaica defender Amari’i Bell and snuck past goalkeeper Andre Blake at the near post for an own goal.

The Reggae Boyz would find their leveller within 10 minutes, however, when Philadelphia Union striker Cory Burke hit a perfectly placed shot from the top of the area that handcuffed Guadeloupe goalkeeper Yohann Thuram-Ulien.

Flemmings snapped the deadlock in the 87th minute, making a brilliant individual effort by outsmarting several defenders and firing a shot through Thuram-Ulien’s legs.

The group’s other game also ended in a comeback 2-1 win, in this case for Costa Rica over Suriname.

Gleofilo Vlijter opened the scoring in the 52nd minute with Suriname’s first ever Gold Cup goal.

But Costa Rica stormed back, scoring two goals in two minutes to take the lead.

In the 58th minute, Joel Campbell equalized with a powerful header and, just a minute later, captain Celso Borges netted after Suriname goalkeeper Warner Hahn lost control of the ball.

Meanwhile, Grenada and Qatar are looking for their first ever Gold Cup victory when the two sides meet for the first time on Sunday night at BBVA Stadium in Houston, Texas.

Back in the tournament after a decade-long absence, Grenada’s young national team is enjoying the moment and wants to turn the page after their opening 4-0 loss to Honduras into a favorable result with the defending Asian champions.

“We’re feeling confident in every match. We back ourselves against anybody. We came out here, we didn’t sit back like we were scared of Honduras. We came out there and we played our football and that’s how we’re just going to approach every match”, Grenada midfielder AJ Paterson exclusively told Concacaf.com.

The 25-year-old Paterson, who features as a defender in the United States with USL Championship side Charleston Battery SC, went the 90 minutes against Honduras.

He is part of a roster that Grenada coach Michael Findlay sees as a core for the national team’s future.

“The future, in my opinion, is very bright,” Findlay told Concacaf.com. “We play football to win. So we will apply ourselves accordingly in the next two games, starting with Qatar, and we’re hoping for a better result than we set out against Honduras, which as I said, I think we felt we were a little bit hard done by but, you know what, we pick ourselves up, we brush ourselves off and we get on with it.”

Qatar coach Felix Sanchez expressed a similar sentiment to how he saw Grenada’s performance with Honduras, sharing that the Caribbean side left a good image.

“In the first 25 minutes, I would even say that they had the best chances,” said Sanchez prior to Saturday’s match. “From there an individual error put them behind on the scoreboard, but even so I think that both teams played to win the game and it was seen. It was a good result, a good game, with a result that I understand was excessive. The result was too harsh for Granada and it was a good game with two good teams each.”

Results on Friday in the CONCACAF Gold Cup: