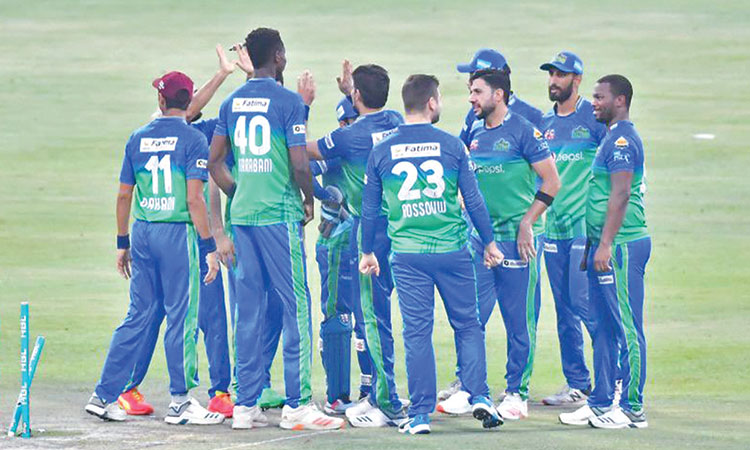 Multan Sultans can lift the title for the first time should they beat favourites Peshawar Zalmi in PSL final. Courtesy: Twitter

After 33 matches filled with the T20 razzmatazz, Pakistan Super League 6 (PSL) will culminate in an electrifying final between Peshawar Zalmi and Multan Sultans in Abu Dhabi on Friday.

The PSL-6 bandwagon was shifted to the UAE after a breach of security protocols led to a few coronavirus cases in the bio-secure bubble in Karachi, which brought the tournament to an abrupt halt before it was resumed in Abu Dhabi again.

The first-time finalists Sultans will look to get away with a chunk of history with a victory over the much-experienced Zalmi, who have been a feature of the title showdown thrice from 2017 to 2019.

They also lifted the coveted trophy amid fanfare at the Gaddafi Stadium fans in 2017, beating Quetta Gladiators by 58 runs in the final under the leadership of the West Indian legend Darren Sammy.

Both Sultans and Zalmi defeated Islamabad United in the play-offs to confirm their berths in the final showdown of the sporting spectacle.

United, who were at the top of the points table with eight wins, lost when it mattered the most to make way for both the teams.

Sultan defeated them by 31 runs in the first qualifier, Zalmi followed it up an eight-wicket win in the eliminator.  Sultans were languishing at fifth spot with just a win from five games when the tournament was suspended in Karachi on March 4.

Their hopes were further dented when star all-rounder Shahid Afridi pulled out of the Abu Dhabi leg due to a back injury.

However, the Sultans saw an incredible change in their fortunes as they won five of the remaining six matches to rekindle their challenge, after having been written off.

Sultans captain Wahab said: “The smile on my face says all about our confidence. We are pretty much confident of winning the title.

“We will look to carry the winning momentum into the final. We have already absorbed all the pressure and we will just go out and enjoy our game,” he added.

Dhani has taken 20 wickets from 10 matches while Wahab had picked up 18, having played one game more.

“I don’t know the reason but since I started playing in the PSL, I have always been the second most successful wicket-taker.

“I hope I can pick some wickets and go on top. But I am more concerned about the team’s success rather personal milestones,” he affirmed.

“We have a good batting line-up with some great hard-hitters like Kieron Pollard and Sherfane Rutehrford. They can hit quite a few boundaries in the death overs to spur the run rate,” he added.

Meanwhile, captain of Sultans Mohammad Rizwan credited the teamwork for the success and also vowed to put their best foot forward to win the championship.

“We have a very good team. We are playing as a unit. It is not about the performance of one or two players in particular.

“We can’t deny the fact there has been some outstanding performers but we don’t rely on any one in particular. Every time the team was in need, someone or else has stepped up to bail us out and take over the line,” said Rizwan.

He also defended the idea of playing with just six batsmen in the T20 format.

“It is not so that we don’t have depth in batting. But we have assigned different roles to different batsmen. If someone can hit three-four sixes and set the tone for a big total our job is done.

“Sometimes playing with a deep bating line-up also backfires. As every batter thinks there are a lot more to come after he throws away his wicket to reckless shots,” apprised the captain.

“We missed Shahid Afridi very much. He is always a motivational factor in the team. I have never seen anyone as brave as him.

“Despite not being physically present with the teams, he sends us messages and keep track of the team’s progress,” added Rizwan.