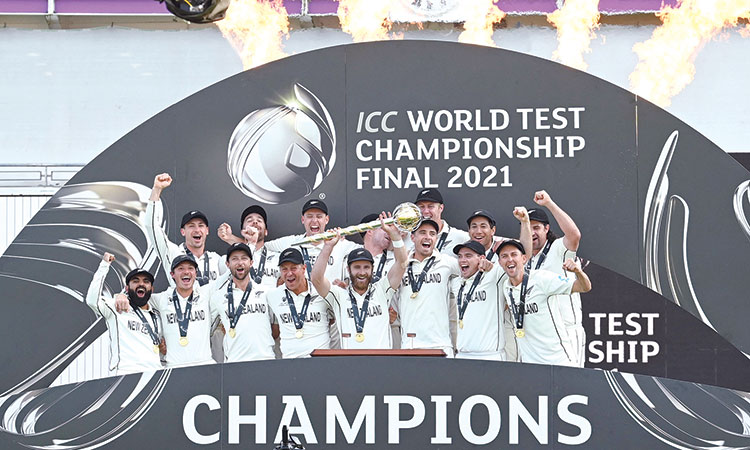 New Zealand players celebrate with the trophy after winning the World Test Championship final match against India in Southampton on Wednesday.

Two years on from their agonising Super Over loss to England in the 50-over World Cup final at Lord’s, the Blackcaps claimed their first major global title.

Set a modest target of 139 in 53 overs, New Zealand finished on 140-2 with plenty of time to spare in a match extended into a reserve sixth day following two days lost to rain. 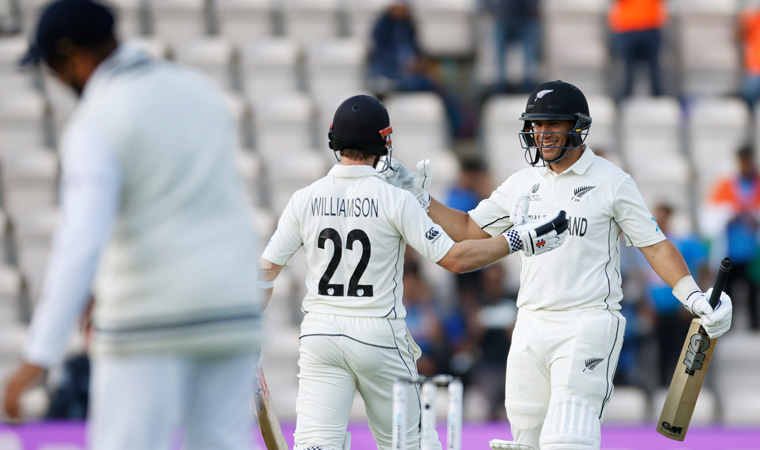 But New Zealand captain Kane Williamson and Ross Taylor, the team’s most-experienced batsmen, settled any lingering nerves in an unbroken stand of 96.

Williamson, who won plaudits for the sporting way he dealt with defeat in the 2019 World Cup final, was 52 not out following his first-innings 49, with Taylor -- who hit the winning boundary -- unbeaten on 47.

India’s last hope of turning the tide evaporated when, with New Zealand 55 runs shy of victory at 84-2, Cheteshwar Pujara dropped a regulation slip catch off the luckless Jasprit Bumrah to reprieve Taylor on 26.

Bumrah dropped Williamson shortly before one of the most outstanding batsmen of his era completed an 86-ball fifty, including eight fours.

Taylor ended the match in the 46th over when he whipped Mohammed Shami off his pads for four. 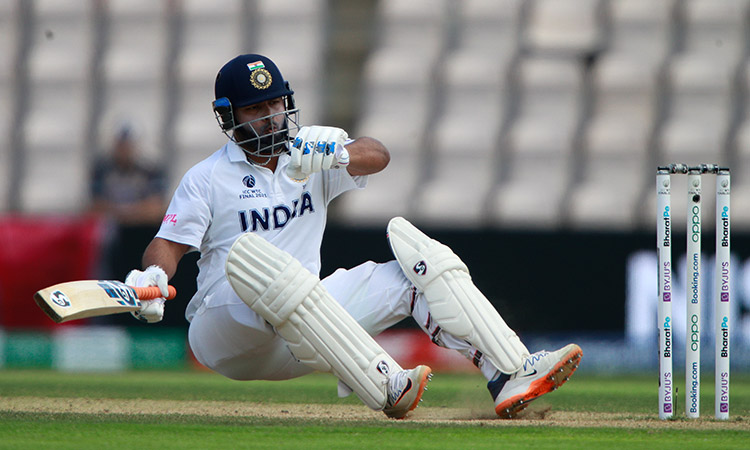 Rishabh Pant loses his balance in an attempt to play a shot during the sixth day of the World Test Championship final. AP

Southee strikes: In a match in which bowlers held sway it was New Zealand’s all-pace attack that did most damage Wednesday by dismissing India for just 170 in their second innings despite blue skies providing the best batting conditions of the game.

Tim Southee took wickets at both ends of the innings in a return of 4-48 in 19 overs, with longtime new-ball partner Trent Boult striking twice in an over during his 3-39.

And the towering Kyle Jamieson followed his first-innings 5-31, by snaring India captain Virat Kohli for the second time in the match during a miserly 2-30 in 24 overs.

New Zealand, whose only previous men’s title in an International cricket Council tournament was their 2000 Champions Trophy one-day final win over India, would have confronted an even smaller target had Rishabh Pant not been dropped on five during his innings of 41.

Few cricket lovers would begrudge New Zealand, a country with a population of around five million compared with cricket powerhouse’s India’s 1.3 billion, their success.

But they entered a final worth $1.6 million to the winners, hardened by a recent 1-0 series win in England, whereas India were playing their first Test since March.

The reserve day, the first time a Test has gone into a sixth day since the 2005 Super Series in Australia, was deployed in the hope a two-year effort to crown red-ball cricket’s first official world champions would end with an outright winner.

India resumed on 64-2, with key batsman Kohli adding just five runs to his overnight eight when he again fell to Royal Challengers Bangalore team-mate Jamieson, edging to BJ Watling in the wicketkeeper’s final match before retirement.