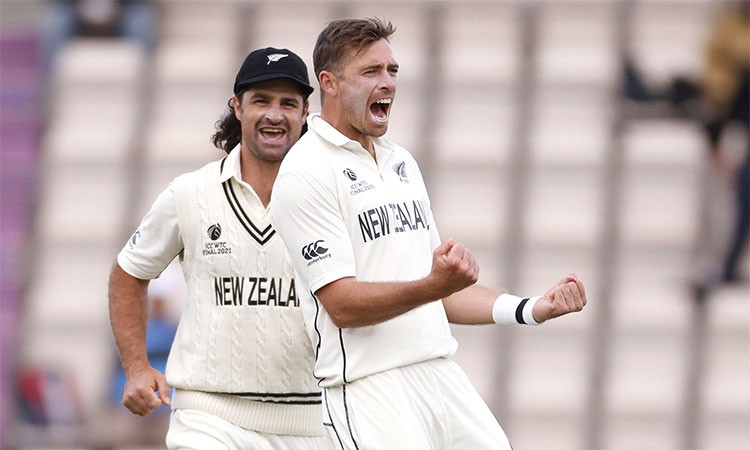 India were 64-2 in their second innings at stumps on Tuesday’s fifth day in Southampton, a lead of 32 runs.

Southee had Shubman Gill lbw for eight, playing across the line before Rohit Sharma, playing no stroke to a ball that cut back, was leg before for 30.

And there was still time late in the day for Southee to hit India captain Virat Kohli flush on the helmet.

Kohli survived to be eight not out, with Cheteshwar Pujara unbeaten on 12 off 55 balls after veteran paceman Southee had talken 2-17 in nine overs.

That a positive result was still possible after both Friday’s opening day and Monday’s fourth had both been washed out without a ball bowled was something of a minor success for the International cricket Council following two years of qualifying series to determine the finalists.

Earlier, New Zealand captain Kane Williamson made 49 out of a total of 249 in reply to India’s first-innings 217. Williamson is one of the outstanding batsmen of his generation but such was the control exerted by India’s quicks in a match where pacemen on both sides have dominated in helpful conditions, he made just seven from 77 balls faced before lunch on Tuesday.

Mohammed Shami led the way for India with 4-76 in 26 overs after yet more rain delayed Tuesday’s start by an hour.

Officials decided to activate the reserve day midway through Tuesday’s play, creating the first six-day Test since the 2005 Super Series between Australia and the Rest of the World and the first in England since the fourth match of the 1975 Ashes at the Oval. New Zealand had resumed on 101-2.

Williamson and Ross Taylor, their two most experienced batsmen, added just 16 runs in Tuesday’s first 13 overs. Shami then had Taylor out for just 11 when a mistimed drive was caught by Gill at short extra-cover.  Ishant Sharma (3-48) followed up by having left-hander Henry Nicholls well-taken by Rohit at second slip. And there were huge cheers from the India fans among a hardy crowd when New Zealand’s 134-4 was transformed into 135-5 as Shami clean bowled BJ Watling with a superb delivery that hit the top of middle and off stumps.

Kyle Jamieson, who took five wickets in India’s innings, drove Shami, armed with the new ball, for a magnificent straight six only to fall to the very next delivery when a top-edged hook was well caught at fine leg by Jasprit Bumrah.

Williamson, in sight of joining New Zealand opener Devon Conway (54) in making a fifty this match saw his painstaking 177-ball innings end when he steered Ishant to second-slip Kohli with New Zealand 221-8. Southee and fellow tailender Trent Boult both hit sixes, however, before the innings finished when Southee played on to left-arm spinner Ravindra Jadeja for 30.

Scoreboard at stumps on Tuesday: 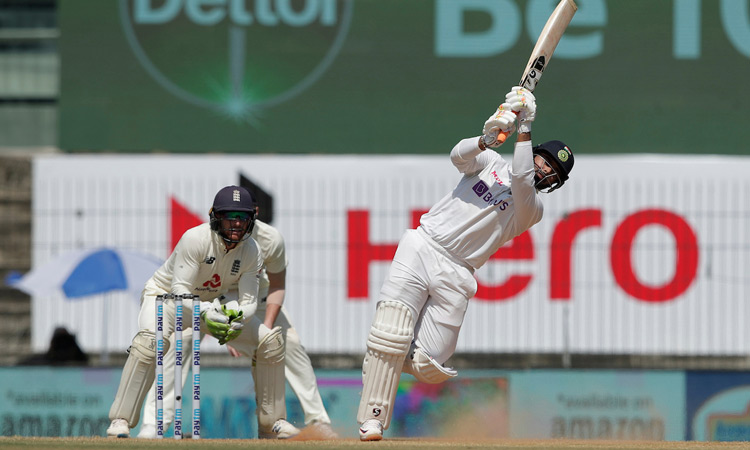 India reached 257 for six at stumps in response to England's 578 in Chennai. Washington Sundar, on 33, and Ravichandran Ashwin, on eight, were batting with an ubroken stand of 32. India need another 122 to avoid the follow-on.