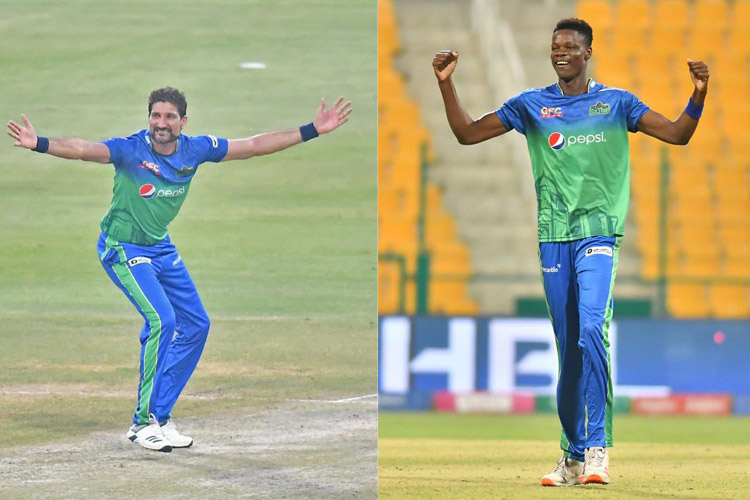 Three-fers from Sohail Tanvir and Blessing Muzarabani and a belligerent half-century from Sohaib Maqsood guided Multan Sultans to their first-ever final of the HBL Pakistan Super League.

Islamabad United, 2016 and 2018 winners, were dismissed for 149 in 19 overs to hand Sultans 31-run win in the Qualifier, played at the Sheikh Zayed Stadium on Monday. 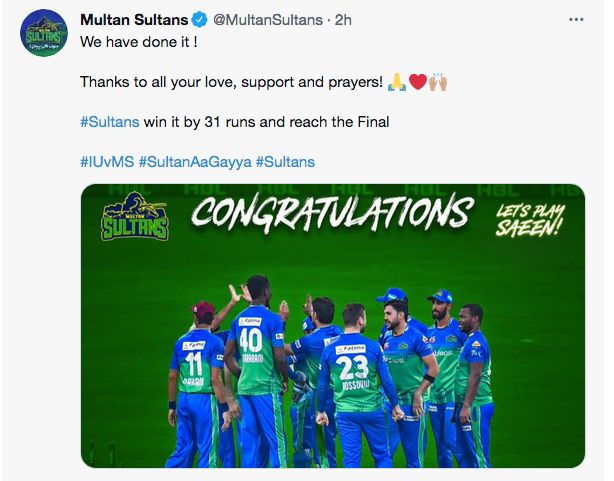 Sultans, who made their first appearance in the HBL PSL playoffs last year but were knocked out after losing to Karachi Kings in the Qualifier and to Lahore Qalandars in the Eliminator, made sure they did not make any mistakes this time around.

All is not lost for Islamabad. They face a second chance in the last eliminator match on Tuesday. An extra day of rest before the showpiece will be gratefully received by the Multan players, though.

In their pursuit of 181, United lost three wickets inside three overs – two to Sohail as the left-arm seamer Tanvir knocked back the middle stump of the in-form Colin Munro for a duck off his second delivery and Shadab Khan (zero off three).

United were reeling at 61 for five in the 10th over before in-form Usman Khawaja was joined by Hussain Talat. The pair contributed 50 off 28 for the sixth-wicket before Sohail – who was brought in for his final over.

He returned to get the key wicket of Usman, who threatened to take the game away from Multan with a scintillating knock of 70 off 40 balls studded with nine fours and a six.

Usman, the only Islamabad-born player in the United squad, was the top scorers for his team.

Zimbabwe international Muzarabani accounted for Iftikhar Ahmed (16 off 15, two fours), Hussain Talat (25 off 25, two fours) and Faheem Ashraf (zero off three) and ended up with three for 31. The left-arm fast Sohail ended-up with figures of three for 17. 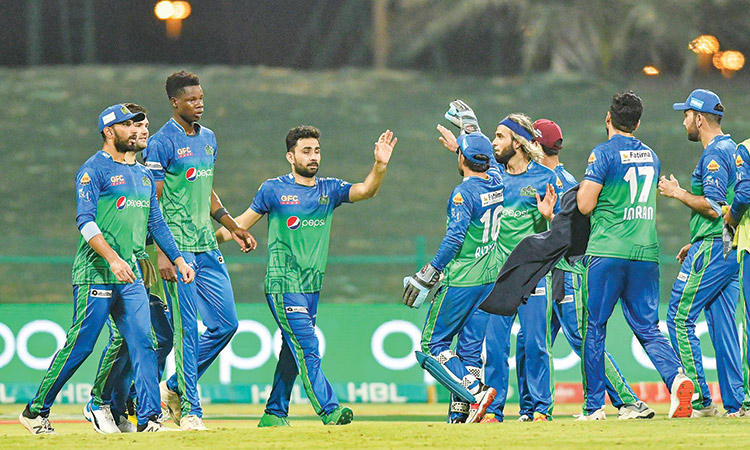 Earlier, after opting to bat first, Sultans scored 180 for five on the back of Sohaib’s fourth HBL PSL 6 half-century. The discarded Pakistan international and right-handed hard-hitting batsman top-scored for his team with 59 off 41, smashing seven fours and three sixes.

He stitched a 63-run partnership with Johnson Charles (41 off 21, three fours, three sixes) for the fourth-wicket after Sultans had lost Shan Masood (25 off 22, four fours) and Rilee Rossouw (zero off two balls) in the eighth over to Shadab. Captain Mohammad Rizwan had earlier perished for a duck in the second over of the innings.

Khushdil Shah (42 not out off 22, five sixes) struck four sixes in the 19th over of the innings which helped Sultans post a formidable score on the board. He knitted an unbeaten 43-run partnership for the sixth-wicket with Sohail (12 not out off nine, one four).

Last season, Sultans finished third after topping the points table in the league phase with 14 points. They lost the Qualifier to eventual winners Kings by four runs in Super Over, then the Eliminator 2 to Lahore Qalandars by 25 runs in Karachi.