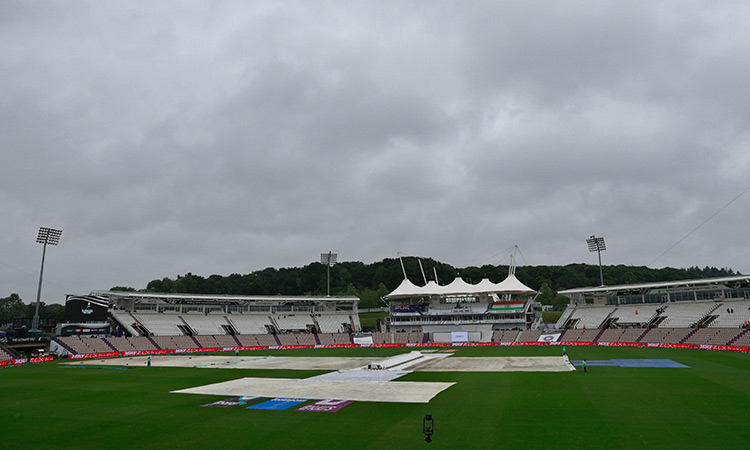 Clouds loom over the Rose Bowl as rain delayed start of the fourth day of the World Test Championship final on Monday. AP

Rain meant there was no play at all in Monday's fourth day of the World Test Championship final between India and New Zealand at Southampton — the second time in the match a day's play had been washed out without a ball bowled.

Overnight and early morning rain meant the pitch and square at Hampshire's headquarters remained fully covered when the match should have resumed at 10:30am local time. Play was finally abandoned for the day at 3:00pm, with Friday's first day having suffered a similar fate.

An absorbing day of high-quality cricket on Sunday, cut short by bad light despite the use of the Hampshire Bowl's floodlights, ended with New Zealand 101-2 in reply to India's first innings 217 — a deficit of 116 runs.

New Zealand was somewhat comfortably placed at 101-2 after fast bowler Kyle Jamiesen’s 5-31 dismissed India for 217 in the first innings on the third day of the rain-affected inaugural WTC final.

The first day was completely washed out while only 64.4 overs could be bowled on the second day.

There is the provision of a reserve day and there's a much better forecast over the remaining two days. If the outcome is a draw, the trophy will be shared.