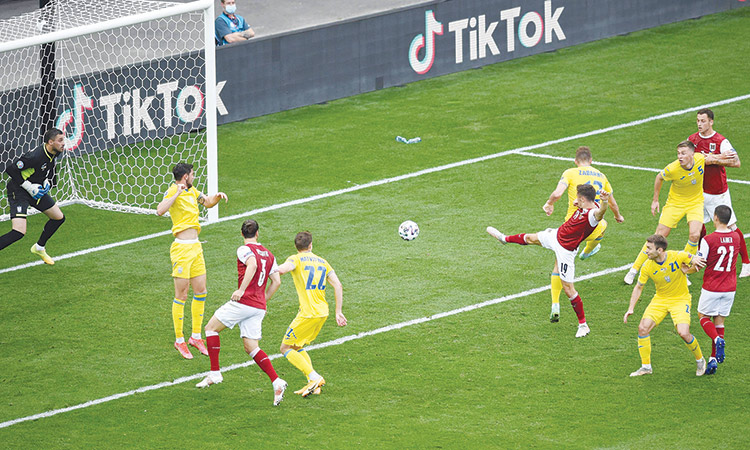 Austria’s Christoph Baumgartner scores against Ukraine during their Euro Group C match at the National Arena in Bucharest on Monday. Associated Press

Christoph Baumgartner’s first-half goal sent Austria through to the last 16 of Euro 2020 on Monday after a 1-0 win over Ukraine that left their opponents facing an anxious wait to see if they qualify.

In another match of the day, Georginio Wijnaldum scored twice as the Netherlands completed a perfect group stage by comfortably beating North Macedonia 3-0 in Amsterdam.

Hoffenheim midfielder Baumgartner turned in David Alaba’s corner on 21 minutes in Bucharest as Austria pipped Ukraine to second place in Group C behind the Netherlands.

Austria will play Italy at Wembley on June 26 after advancing from the group stage at a major tournament for the first time since the 1982 World Cup.

Ukraine, eliminated in the group stage at the past two European Championships, must wait to find out if they advance as one of four best third-placed teams.

Andriy Shevchenko had ruled out his Ukraine team playing for the draw they needed to finish as runners-up, having snapped a run of six straight losses at the competition with their 2-1 win over North Macedonia.

Austria coach Franco Foda recalled Marko Arnautovic after the forward missed the 2-0 defeat by the Netherlands while serving a one-match ban for insulting a North Macedonia player in their opening game.

Needing victory to be assured of a place in the next round, Austria went ahead as Baumgartner beat 18-year-old defender Illia Zabarnyi to Alaba’s corner and poked beyond Georgiy Bushchan.

Ukraine came close to an equaliser when Mykola Shaparenko drew a good low save from Daniel Bachmann, the rebound just eluding a lunging Andriy Yarmolenko, who had scored in the first two group games.

Baumgartner’s evening ended prematurely due to injury and his replacement Alessandro Schopf soon set up Arnautovic, the former Stoke man dribbling wide moments after Konrad Laimer’s curling effort was punched away by Bushchan.

Austria nearly handed Ukraine a way back into the match when Stefan Lainer headed Viktor Tsygankov’s free-kick towards his own goal, but Bachmann reacted well to preserve the victory and a spot in the knockout phase.

Netherlands blank North Macedonia: The Dutch captain Wijnaldum, who signed for Paris Saint-Germain from Liverpool just before the tournament began, scored twice in the second half at the Johan Cruyff Arena after Memphis Depay had put them in front.

Depay, fresh from sealing a transfer of his own to Barcelona, could claim assists for both of Wijnaldum’s goals as Frank de Boer’s side made it nine points out of nine in Group C.

They had already secured qualification for the last 16 as group winners after defeating Ukraine and Austria in front of their own fans at the home of Ajax, and so the 1988 European champions knew they were heading for a knockout tie in Budapest next weekend.

North Macedonia, meanwhile, were already out after losing their first two games in their debut appearance at a major tournament.

They leave without a point, but they will never forget this campaign and this game will be best remembered as the last of veteran 37-year-old striker Goran Pandev’s international career after two decades.

He was gifted a Dutch shirt with the number 122 -- the number of caps he has won -- before kick-off, and was given a guard of honour by his team-mates as well as an ovation from the home fans on being replaced midway through the second half.

But the North Macedonians couldn’t sign off on a high, with Pandev setting up Aleksandar Trajkovski for a shot off the post when the game was still goalless.

They also had two goals disallowed for offside and felt that the Netherlands’ opener in the 24th minute should not have stood.

Pandev felt he was fouled on the edge of the Dutch box by Daley Blind but the Romanian referee allowed play to go on and the home side broke forward.

Depay exchanged passes with Donyell Malen before finishing and the goal stood following a VAR check.

Relaxed send-off: PSV Eindhoven forward Malen and Ajax midfield prodigy Ryan Gravenberch came in for Wout Weghorst and Marten de Roon as the only two changes made to the Dutch line-up by De Boer. 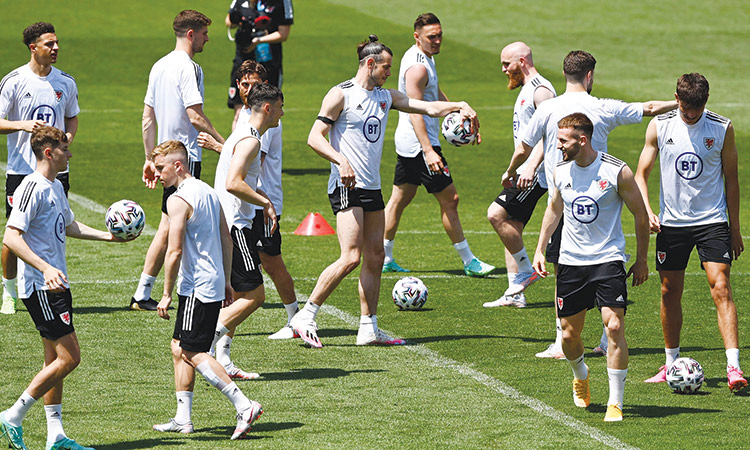 ‘Career highlight’ for captain Bale ahead of Wales’ Euro return

Wales and Gareth Bale head into their second straight European Championship with aspirations kept in check after their surprising run to the semi-finals in 2016. Five years later Bale will captain his country having taken over from the emblematic