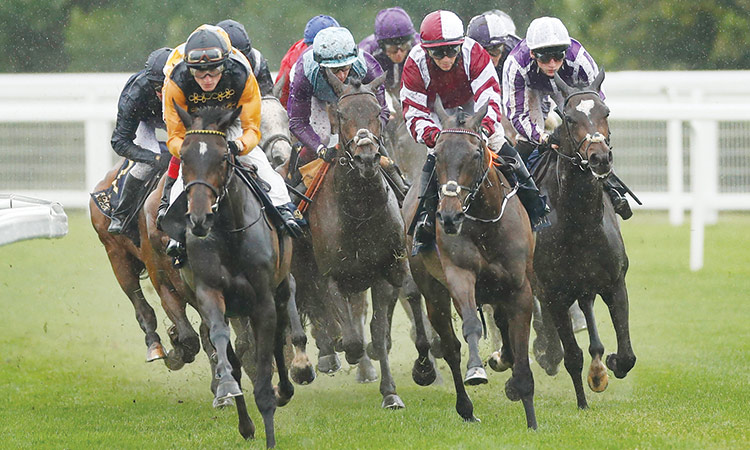 Alcohol Free, ridden by Oisin Murphy, races towards the finish line to win the Coronation Stakes on Friday. Reuters

Two-time champion jockey Oisin Murphy bounced back from losing the Group One Commonwealth Cup in the stewards room to land the feature race the Coronation Stakes on a rain-sodden Friday at Royal Ascot.

The mud-spattered 25-year-old Irishman brought home Alcohol Free to win, sticking his tongue out as he crossed the line.

However, he then got dumped unceremoniously on the muddy turf when he tweaked his mount’s ear.

He had also been brought down to earth half an hour earlier when the stewards judged his ride on Dragon Symbol had prevented Frankie Dettori winning on Campanelle in the Commonwealth Cup.

“I said to my valet in the jockey’s room when he put his arm round me after the stewards enquiry there is no place for tears in here,” said Murphy after his ride on Alcohol Free.

“There are far worse things going on in the world and we are in the entertainment business. I am just lucky to be riding top class horses,” added Murphy, who won again later in the day on the well-backed Quickthorn in the Duke of Edinburgh Stakes.

Alcohol Free provided trainer Andrew Balding with his second winner of the day.

The 48-year-old was unrestrained in cheering Alcohol Free home leaping in the air and landing safely with the excess rain water splashing all over the top-hatted and tailed trainer. So much rain had pounded down overnight that it took a late inspection to clear the course to be raceworthy.

Murphy’s duel with Dettori had warmed up the sodden spectators in their Ascot finery.

Dettori fought it out over the final furlong (200 metres) with Murphy on his Japanese-owned mount just edging the 50-year-old Italian.

However, joy was to turn to bitter disappointment as the stewards, having viewed the images and heard both the jockeys, reversed the placings.

“We are elated, I am glad the stewards took the decision they did,” said Ward, winning for the 12th time at Royal Ascot.

“That is a true gentleman right there,” added Ward of Watson’s gesture.

“I feel very sad that I got it, but I had reason to believe that my filly was still the best on the day.”

Tom Marquand guided home Alenquer to win the King Edward VII Stakes and frank his form as he had beaten the eventual Derby winner Adayar in his previous run.

Marquand was asked what he would say when if he saw his fiancee Hollie Doyle in the changing rooms. They both have one winner this week.

“I go in and say I am the one taking out the bins tonight!” he said laughing

Balding’s father Ian sent out his legendary champion Mill Reef to win as a two-year-old at the 1971 Royal Ascot meeting.

Balding junior has had a good time with his own two-year-old’s this week, capturing the Group Three Albany Stakes with outsider Sandrine.

Winning jockey David Probert punched the air in delight several times admitting he had been nervous he might lose the ride.

“There is a lot of competition in the jockey’s room but I am very grateful to the owner Kirsten Rausing for sticking with me,” said Probert.

“Oisin (Murphy) could have had the ride as he came up through the ranks with Andrew but she stuck with me.”