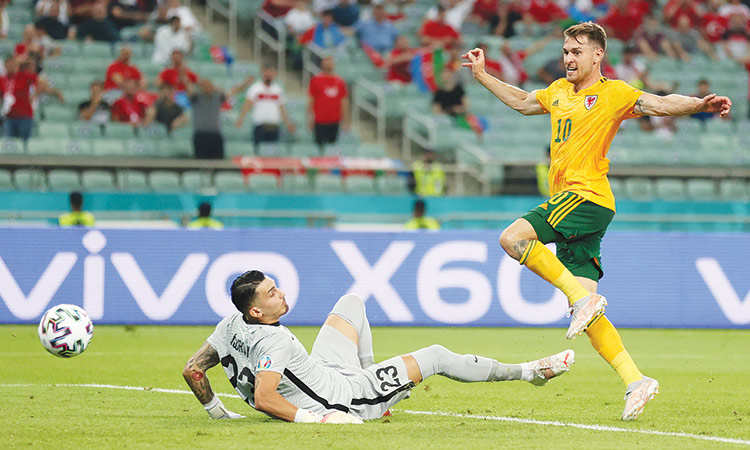 Wales’ Aaron Ramsey (right) scores a goal against Turkey’ during the UEFA Euro 2020 Group A match in Baku on Wednesday. Agence France-Presse

Aaron Ramsey and Connor Roberts scored as Wales took a huge step towards reaching the last 16 at Euro 2020 with a 2-0 win over Turkey in Baku on Wednesday.

Turkey are facing an uphill challenge to reach the knockout stages after losing their first two Group A matches without scoring.

Wales, semi-finalists five years ago, should have won more convincingly, but wasted several chances including a second-half penalty which was blazed over by captain Gareth Bale.

Robert Page kept the same Wales side from Saturday’s 1-1 draw with Switzerland in Baku.

A hostile crowd was expected due to the close links between Ankara and Baku due to a centuries-long relationship solidified with Turkey’s support of Azerbaijan in last year’s conflict in Nagorno-Karabakh. Every early Wales touch was welcomed with whistles from the 30,000 crowd, with up to 4,000 Turkish fans having travelled, including President Recep Tayyip Erdogan.

In a very open first half an hour both sides had very good chances to open the scoring including Turkey skipper Burak Yilmaz, whose effort was deflected out for a corner, and Wales’ Ramsey.

With opportunities at both ends as the two teams refused to sit back, the Crescent Stars had two efforts blocked by last-gap defending on the 30-minute mark. With two minutes of the half remaining the vocal home support were stunned into silence by Ramsey’s opener.

Bale found Ramsey free in the box and the Juventus man chested the ball down before side-footing coolly past Ugurcan Cakir, making amends for missing two glorious earlier chances.

The muted crowd rediscovered their voices after the interval as Turkey pressed forward for an equaliser, their best chance falling to Yilmaz who sent his volley from close range high into the stands. The game remained open going into the final 30 minutes and Ramsey was just stopped from adding a second as Cakir blocked with his foot, before Bale had an opportunity to seal the three points.

He charged into the box and was tripped by Zeki Celik but the one-time most expensive player in the world fired his penalty over the crossbar.

Page brought Ethan Ampadu on for the tiring Joe Allen, one of just two players remaining from the starting team in the semi-final defeat to Portugal in 2016, with a quarter of an hour left before Gunes sent on Halil Dervisoglu to partner Yilmaz up front. Turkey applied incessant pressure in the closing moments.

With three minutes left the previously dropped Demiral had a golden chance but his free header from a Hakan Calhanoglu corner was wasted.

A scuffle broke out in the Wales box at the start of injury time after a collision on the floor and Ben Davies, Chris Mepham and Yilmaz were shown yellow cards before Page’s men claimed a second goal.

Bale powered into the box from a short corner, found Roberts and the Swansea right-back claimed his second international goal to send the 400 Wales fans into pandemonium behind the goal.

Earlier, a special goal by Aleksei Miranchuk allowed Russia to kickstart their Euro 2020 campaign with a 1-0 win over Finland in Saint Petersburg on Wednesday, but the game was marred by an injury to Mario Fernandes.

Miranchuk, of Serie A side Atalanta, produced a glorious finish in first-half stoppage time for the only goal of the game between the neighbours in Group B. It blows open the section after Russia, one of nine participating nations at the Euro playing matches at home, had lost 3-0 to Belgium in their opening game at the weekend.

Russia’s final group game will be in Denmark next Monday, while Finland should again have a sizeable support behind them as they stay in Saint Petersburg to play Belgium.

Here it was Russia’s Fernandes, the Brazilian-born CSKA Moscow right-back, who provided an injury scare. The 30-year-old went up for a high ball in the Finland box in the first half and came down awkwardly, the back of his neck taking the full force of the landing.

He needed to be stabilised and was stretchered off before being taken to hospital. The Russian team’s Twitter feed later said that tests revealed he had not suffered a spinal injury but that he would remain under supervision while returning to Moscow.

Russia went on to win the game without Fernandes, as Miranchuk turned on the edge of the box and played a one-two with skipper Artem Dzyuba before sending a glorious left-foot shot into the top corner of the net.